Studying jazz guitar licks and getting a jazz vocabulary is an important part of learning how to play jazz guitar. Players such as Charlie Parker, Charlie Christian, and Dizzy Gillespie brought fresh levels of excitement to their solos, ushering in a new era of jazz improvisation. In this lesson, you will learn 50 jazz guitar licks, as well as the important concepts behind each lick. This way, you will build your vocabulary and expand your theory knowledge at the same time.

Although the bebop era lasted less than a decade, it had a lasting influence on modern jazz guitar. Subsequent generations of jazz improvisers and guitar players such as Barney Kessel, Joe Pass, George Benson, Kurt Rosenwinkel, and Jim Hall were heavily influenced by bebop.

While many guitarists fall in love with the bebop sound, learning how to play in the bebop style can seem intimidating, but it doesn’t have to be. By learning jazz licks, and the concepts that are used to build those lines, you will bring a bebop vibe to your own jazz solos.

Here are some exercise tips you can use to internalize each lick and add more vocabulary to your jazz guitar improvisation.

Before we begin our list of 50 bebop licks, here are two jazz guitar licks that incorporate many of the bebop characteristics in a modern jazz setting.

Both licks are played over a ii V I chord progression in G.

This first lick is in the style of Wes Montgomery, one of the greatest jazz guitarists ever. The lick uses a mix of scales and arpeggios that will be explained further on in this lesson. 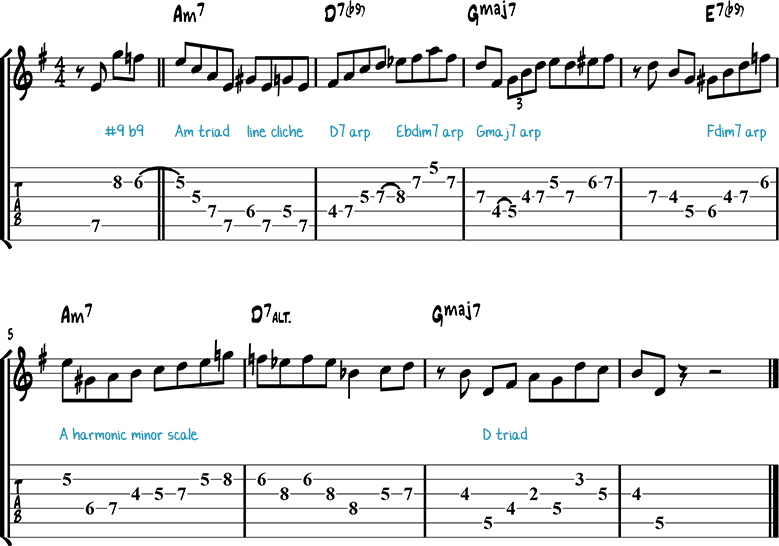 This lick starts with an arpeggio of the minor ii chord before going to a C augmented triad over the D7 chord, a typical bebop device to get a #11 sound.

The last three bars of the lick use the G major blues scale, hammering on the b3 blues note at the end to bring out a bluesy sound. 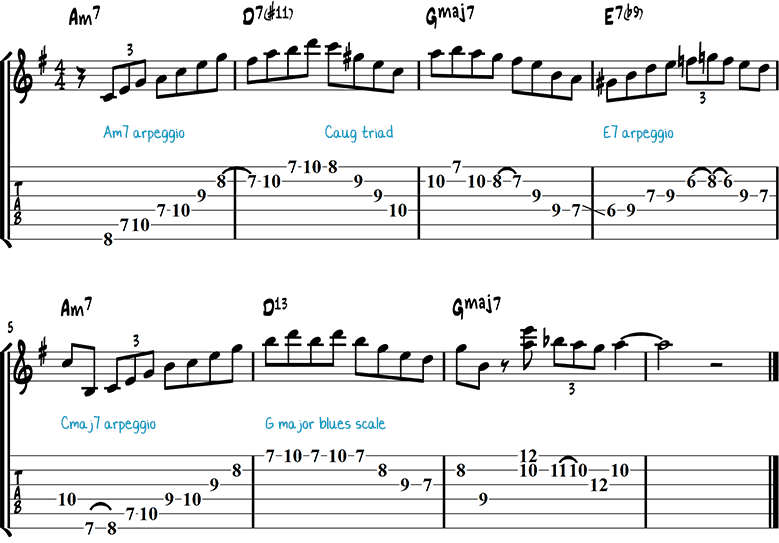 Because of its popularity, it’s important that you are able to navigate these changes well.

The following 24 licks will give you some options and much-needed variation to play over II V I progressions.

This bebop lick starts with a simple Dorian mode run and continues with a phrase around Abm(add9), the notes of the famous Cry Me A River motif.

The next two jazz guitar licks start with a simple Dm7 arpeggio pattern that is typical for bebop.

This first variation uses an Abm(add9) arpeggio over the G7 altered chord.

This jazz lick starts with the same Dm7 arpeggio pattern over the minor chord. Instead of an Abm(add9) arpeggio over the G7, this lick uses a Dbmaj7 arpeggio, a different way to play over dominant chords.

This jazz guitar lick starts on the D melodic minor scale and continues with a Dm7 arpeggio on the G7.

Not playing the V (G7), but staying on the ii (Dm7) is something that occurs often in bebop.

This is called minorization, a concept frequently used by Charlie Parker, Pat Martino, and Wes Montgomery.

The next lick uses the G dominant diminished scale over the ii V, going to a G triad in the third bar.

This jazz lick starts with the D Dorian mode and continues with the G Phrygian dominant scale over the G7 chord.

The (G) Phrygian dominant scale is the fifth mode of the (C) harmonic minor scale.

This bebop lick in the style of Tal Farlow uses a number of chromatic notes to outline the ii-V-I underlying chord changes.

The following 4 licks start with the same minor bebop pattern in bar 1, with variations on the G7 in the second bar.

This gives you some examples of what you can play over the dominant chord in a ii V I progression.

This first variation uses chromatic approach notes that target the 5 and 3 of G7.

In the second variation, the chord tones of Abm(add9) are used over G7.

This is a common bebop substitution for dominant chords.

Here, the second bar starts with a chromatic run, followed by a Dm7 arpeggio.

Playing a minor arpeggio over a dominant chord is called minorization, the same concept used in lick 4.

In this last variation, the dominant phrase is formed around a voice leading going from 13 to b13.

This lick uses a line cliché in the first bar, a typical voice leading descending chromatically from d to c# to c to b.

In the second bar, I play an Ab diminished arpeggio over G7, a common chord substitution in bebop.

In bar three, I play a series of 6th intervals in the C major scale to finish the phrase.

This phrase uses the melodic minor sound, by playing an Fmaj7#5 arpeggio (F-A-C#-E) over Dm7.

There is a nice chromatic approach to the 3rd of G7 at the start of the second bar (A-A#-B) that leads the listener to the chord that is coming next.

The next lick starts with a Dm7 arpeggio and is completely diatonic.

When playing over bebop tunes, you don’t always have to use chromatic notes to outline the changes. Sometimes a diatonic run, such as this, is exactly what the tune needs at that moment in time.

This lick starts with the Groovin’ High motif, named after the jazz standard written by trumpet player Dizzy Gillespie.

Here, I start with an Fmaj7 arpeggio over Dm7, a common chord substitution.

The lick continues with a series of string-skipping intervals in the C harmonic minor scale.

Here I start with the famous Honeysuckle Rose motif, named after the jazz standard composed by piano player Fats Waller.

The lick continues with the C harmonic minor scale over G7 and finishes with a 1235 pattern in bar three.

This lick ends with a Cmaj9 arpeggio, before going to the #11 of Cmaj7.

Here, I play the G altered scale over G7, the fifth mode of the C melodic minor scale.

Lick 21 starts with a Dm(add9) run before it goes to the G altered scale in the second bar.

The next jazz guitar lick (in F major) starts with a Gm11 arpeggio and ends with an Am7 arpeggio over Fmaj7.

In this Joe Pass style bebop lick, I use tritone substitution (F#7 over C7) to outline the V7 chord in bar two of the phrase.

When soloing over ii V I changes in a bebop style, you can use the progression ii bII7 I to bring a tritone-sub sound into your solos.

When doing so, you’ll create some added tension to the V7 chord that you resolve into the next bar of the lick. Letting tension hang can cause your line to sound like a mistake, but if you resolve that tension properly, tension such as this can be an effective improvisational tool.

In this Dizzy Gillespie inspired lick, you see a delayed resolution over the Imaj7 chord in the third bar of the phrase.

The C7b9 chord is played over the first beat of the third bar, before resolving to the Fmaj7 chord on the second beat of that bar.

This line has been played by countless jazz musicians over the year. Because of its popularity, it’s another must-know bebop lick to add to your soloing vocabulary.

The lick starts with a leading tone (c#) before running up the iim7 arpeggio and ends with a four-note pattern.

The next lick starts with a sixth interval and ends with an Em7 arpeggio over Cmaj7, the same chord substitution we used in lick 16

Lick 27 is completely diatonic and ends with a typical bebop pattern, a Cmaj7 arpeggio.

This arpeggio pattern is sometimes called the bebop arpeggio. It starts on the 7th, followed by the other three notes of the chord (1-3-5) played in a triplet.

The next phrase comes from John Coltrane and uses diatonic notes and triads in the bebop style.

As well as the major ii V I progression, the minor ii V I occurs in almost every jazz standard, so it’s important to have some vocabulary ready for this progression.

This first minor ii V I lick uses the Bbdim7 arpeggio over A7 and an F augmented major chord that brings out the melodic minor sound over D minor.

In this Clifford Brown lick, you will see the A Phrygian dominant scale (= D harmonic minor scale) used over the A7alt chord.

The scale actually begins in the second half of the first bar (on note A) and uses the fifth mode of harmonic minor to create a typical bebop run over the next 6 beats. When soloing in the bebop style, the Phrygian dominant scale is the first-choice sound when improvising over V7 chords.

Just as in lick 1, this lick uses the Cry Me A River motif, but this time over a half-diminished chord.

In this lick, a 3 to b9 arpeggio is used over the dominant 7th chord in the second bar.

A 3 to b9 arpeggio is a dim7 arpeggio starting on the third of a dominant chord.

The next series of licks are over a short ii V I progression in D minor.

This simple, but effective lick, uses an Em7b5 arpeggio and the D harmonic minor scale.

Though arpeggios are mostly used in jazz to outline chords, swing and bebop era players often used the 1-3-5 triad to outline the underlying chord. When working on soloing over bebop changes, don’t forget to spend some time on triads, they’ll come in handy as you use them over bebop tunes.

Here’s a classic minor ii V I bebop lick that uses a Bbdim7 arpeggio over the A7alt chord.

When playing a dim7 arpeggio from the 3rd of any 7th chord, you’ll outline the 3-5-b7-b9 intervals of that chord. This is called a 3 to 9 arpeggio, an essential learning for any bebop guitarist.

Lick 40 also has a Bbdim7 arpeggio outlining the V7alt chord as well as a major 7 leading to the tonic in the second bar.

The major 7th, either in an arpeggio or from the melodic minor scale, was a popular note choice over minor chords in the bebop era.

In this short minor ii-V-i phrase, you can hear an enclosure being used around the 3rd of A7alt (Bb-C-C#), as well as the D melodic minor scale being hinted at with the C#-D motion in the last part of the phrase.

The following jazz guitar licks are played over the first four bars of a jazz blues chord progression in F.

When playing over dominant chords in a bebop blues style, the b7 of the dominant chord is often played in the last part of the phrase to emphasize the transition to the next chord.

The same delay of the b7 is used here at the fourth bar of the jazz blues progression.

This bebop lick is from the Charlie Parker songbook and is one of the most popular jazz licks of all time.

This lick features the blue notes (b3 and b5). Blue notes come from the blues scale and are an essential tool for jazz blues soloing.

One of the most common jazz chord progressions is the rhythm changes progression, named after the jazz standard I Got Rhythm, composed by George Gershwin.

The backbone of a rhythm changes is the I VI II V, a must-know chord progression for every jazz musician.

This series of licks over the first eight bars of a rhythm changes uses a mixture of arpeggios and patterns that are typical for bebop. 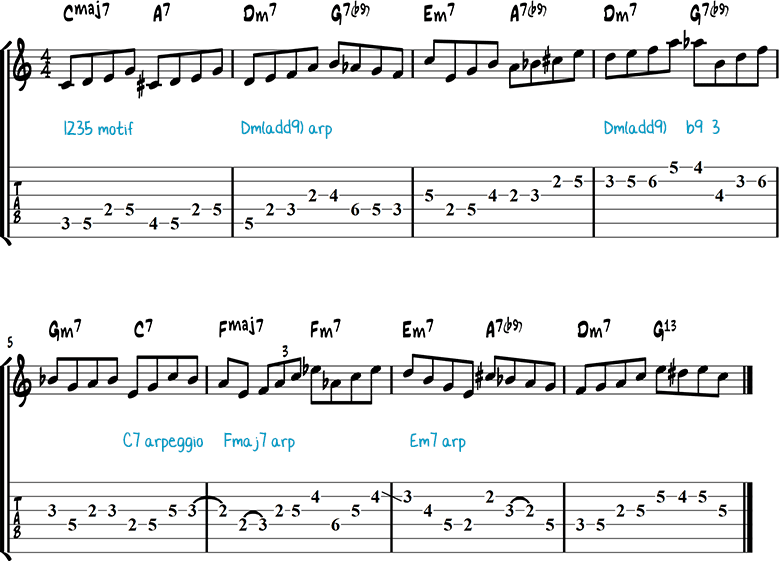 Bebop lick 48 is one of the most common played phrases in bebop (besides “The Lick”).

This jazz guitar lick demonstrates how ascending four-note patterns can be used to navigate through the 1-6-2-5 harmony.

Now that you have worked on these lines on their own, practice applying them to your soloing when playing over jazz progressions and jazz standards.