In this lesson you will learn how to recognize these progressions from a Roman numeral standpoint, allowing you to quickly transpose them to other keys, as well as two different ways to comp through each progression on the guitar.

Here’s a list of the 10 jazz chord progressions in this lesson:

It can be found in countless tunes, in all 12 keys, and with many different permutations, both rhythmically and harmonically. For this reason, it is the best place to start when working on solidifying and expanding your jazz guitar progressions repertoire.

Btw, the % symbol means you have to repeat the chord of the previous bar.

Here are two examples of how to play this progression in the key of C:

This chord progression is the first A of a Rhythm Changes.

Built around the I-vi-ii-V progression, with a slight variation between the first and second two-bar phrases, this chord progression can be deceptively simple. This is why a lot of guitarists don’t dig deep when exploring this progression.

But, for those that do lift the hood and explore these changes with a bit more detail, you can learn new and creative ways of outlining these often-used chords, taking your Rhythm Changes comping to new levels of creativity.

Here are two examples of how to play through these changes to help get you started:

This is also a very common jazz chord progression. Used in tunes such as “How High the Moon” and “Tune Up,” descending major 2-5-1s are a commonly used harmonic device that can prove to be kind of tricky when first learning to navigate these chords.

There are 2 modulations in this progression:

When faced with descending harmonic patterns such as this, many of us simply repeat the same chords down two frets for each new key. While this can work, more advanced players will find ways to ascend up the neck as the chord progression descends, providing a nice harmonic contrast during these chords.

Here are two examples of how you could practice comping through these changes: 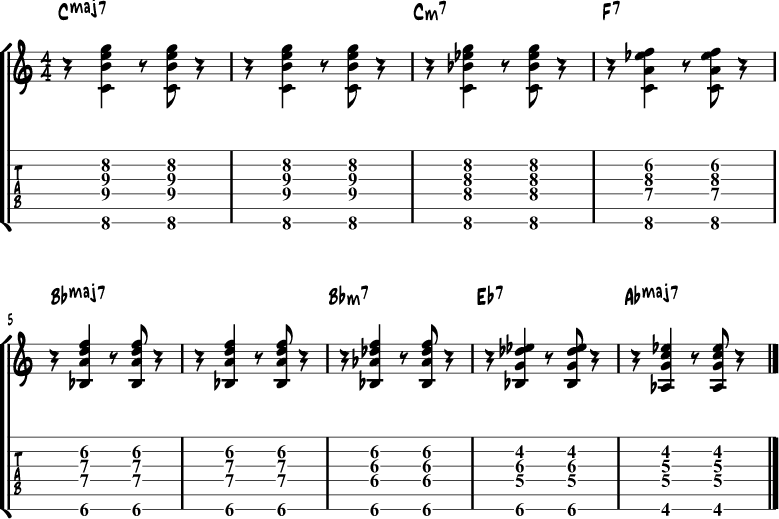 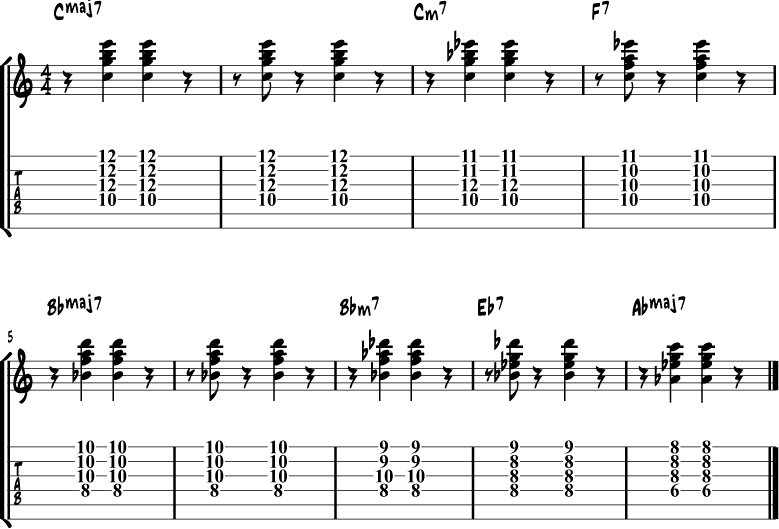 Heard in tunes such as “Cherokee,” the use of diminished 7 passing tones to connect the Imaj7 and iim7 chords, as well as the iim7 and iiim7 chords, in any chord progression is a commonly used and important harmonic device that can spice up the playing of any jazz guitarist.

Dim7 chords not only add harmonic tension to this progression, but the chromatic bass line helps to build tension, which is then resolved to the iim7 and iiim7 chords in the following downbeats.

To get you started, here are two ways that you can work on comping these important chords:

These chords, which feature the cool-sounding and fun to play II7 chord, are mostly associated with the classic Ellington track Take the A Train.

The movement from Imaj7 to II7 to iim7 is one that you will see in many different jazz guitar tunes, including the classic Bossa Nova track The Girl From Ipanema, and is therefore worth working on from both a comping and soloing standpoint.

Here are two ways that you can work on these chords to help get them under your fingers and into your ears: 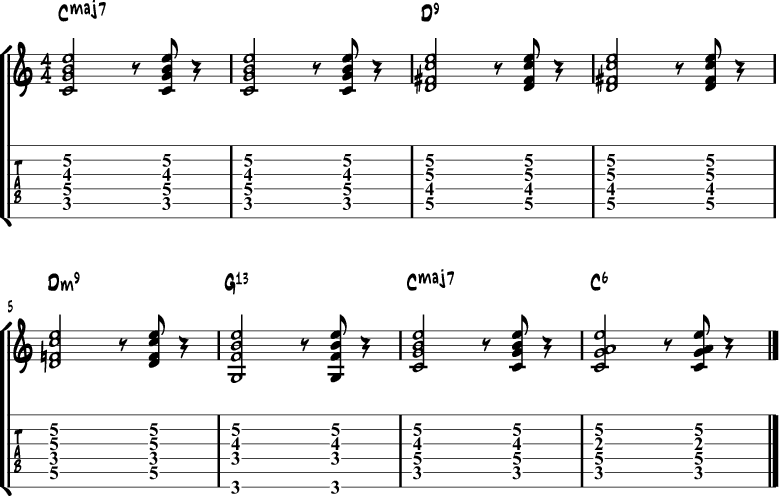 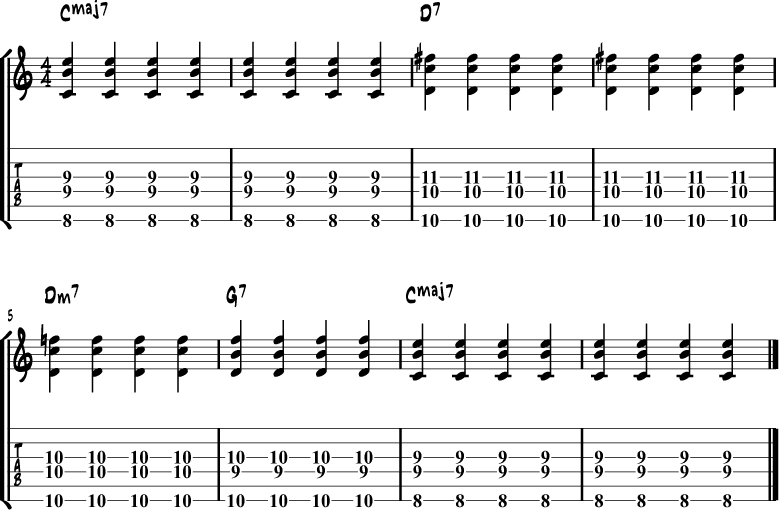 For anyone that has played the blues, you know that the movement from a I chord to a IV chord is a commonly heard sound in the jazz guitar idiom.

Working on these two examples, in various keys, will help get this important sound into your ears and under your fingers, allowing you to confidently bring these changes to your jam sessions and gigs in no time:

Used by countless jazz composers and improvisers, as well as many pop musicians such as the Beatles, the IV (major) to iv (minor) harmonic movement is one that every jazz guitarist needs to have under his fingers from both a comping and soloing standpoint.

The key to learning to play and hear this progression is the movement from the IVmaj7 to the ivm7 chord.

Here are a few ways that you could comp through this progression to help get you started: 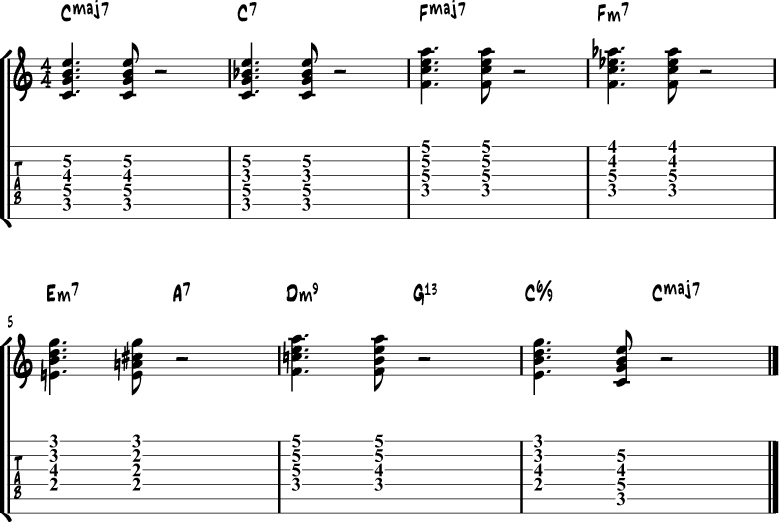 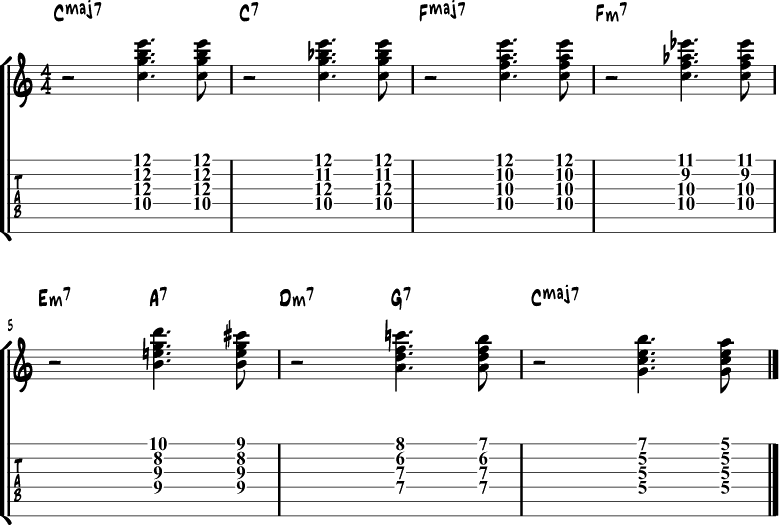 As we saw earlier, Rhythm Changes is a tune that is full of classic sounding, and must-know, chord progressions.

Based off of the cycle of 5ths, the bridge to Rhythm Changes features four 7th chords moving up by a 4th with each new chord in the progression. Though there are only four chords, these changes can be tricky to master, and therefore are worth exploring.

To help you get started, here are a couple of ways that you can practice playing the bridge to Rhythm Changes (in Bb major): 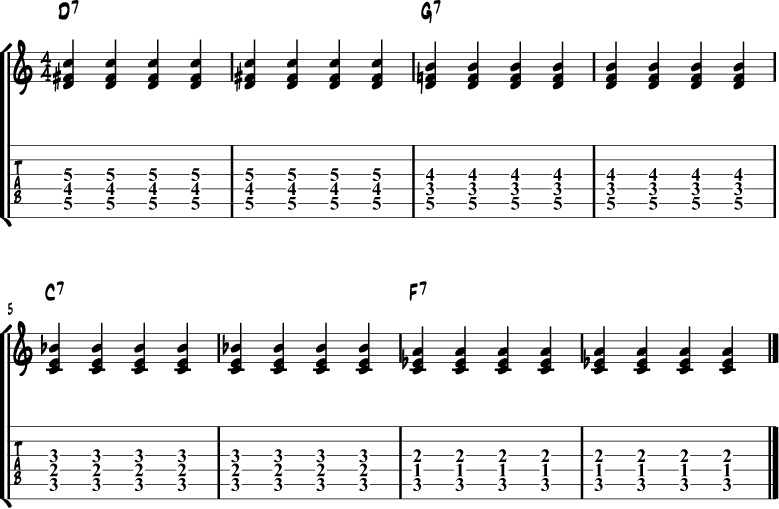 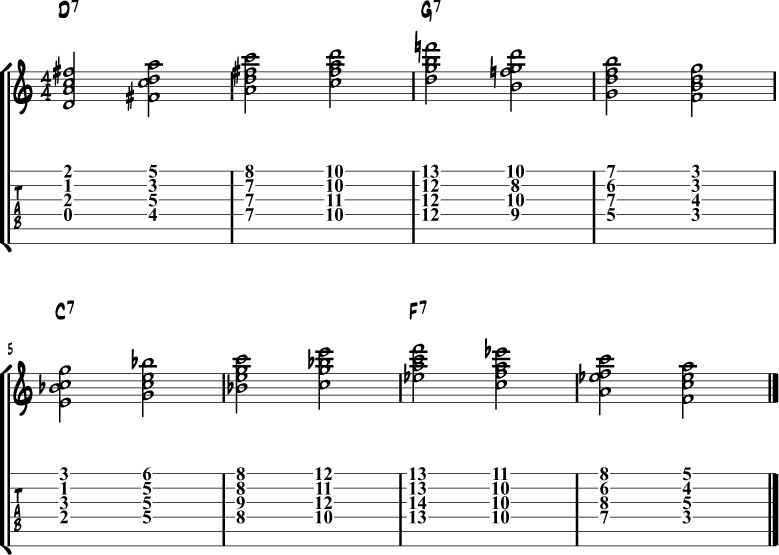 Just like its major-key cousin, the minor ii V I progression is found in countless tunes from many different composers and improvisers.

Featuring the ever-tricky 7alt chord, this progression can be tougher to master than the major-key version we saw earlier, which is why it’s important to continue to develop your minor ii V I vocabulary even for more experienced players.

Here are a couple of examples to help you get started with comping through this important group of 3 chords:

Heard in the classic tune “Stray Cat Strut,” this minor-key turnaround is one that every jazz guitarist should have under his fingers. With a distinctive bass line, simple yet effective harmonic movement, and a swinging feel, these four chords can add spice to any plain minor-turnaround.

To get you started, here are two ways that you could comp through this important minor-key turnaround: