Jazz guitar chords can be complicated and as a beginner, it’s hard to know where to start. When first learning how to play jazz chords, many of us are intimidated by their sounds and shapes. But, jazz chords don’t have to be difficult to get under your fingers if you begin with the right shapes. The chord chart in this lesson features the 17 chord shapes that are essential when learning how to play jazz guitar.

This lesson is designed to introduce you to the various families of jazz guitar chords, with a focus on important, but easy-to-play shapes.

By studying the basic jazz chords in this lesson, you will not only introduce yourself to the world of jazz guitar chords, but you will learn how to apply them to chord progressions as well, getting you ready to jam with friends or comp along to your favorite backing track in no time.

What Are Jazz Chords?

This is a tough question to ask, as many chords associated with jazz are also found in pop, classical, rock, blues, and other musical genres.

Jazz chords are shapes that use at least 4 notes in their construction. These are chords that go beyond the 3-note triad and include the 7th, 9th, 11th, and/or 13th.

If you want to play a major chord in rock, you would normally just play the major triad, G for example.

If you want to play a major chord in jazz, you would play Gmaj7, G6, G6/9, or another major chord that extends beyond the major triads that are used as rock guitar chords.

In order to help you learn the construction of each chord in this lesson, the intervals for each shape have been written on the fretboard, which will help you understand how all of these chords have been constructed.

Here are the interval formulas for the five chord types you will be learning first:

These formulas are explained in more detail in our chord theory tutorial, but knowing them isn’t a must at this time. You can learn jazz without knowing too much theory, although music theory can be a huge time-saver for learning jazz guitar.

Start by learning the basic chords and chord progressions below, and then keep working on chord theory, as it will be covered in other guitar lessons.

How to Read Chord Diagrams?

The red circle represents the root note (aka 1 or bass note) of the chord. The numbers in the black circles are the other chord tones.

On the chord charts below, all bass notes are C.

By moving these chord shapes up or down the guitar neck, you get other chords of the same type.

For example: move the chord shape of Cmaj7 two frets higher and it becomes a Dmaj7.

The number underneath the chord diagram is the fret number.

The numbers at the right side of each chord diagram indicate which fingers to use to fret the chord with your left hand. 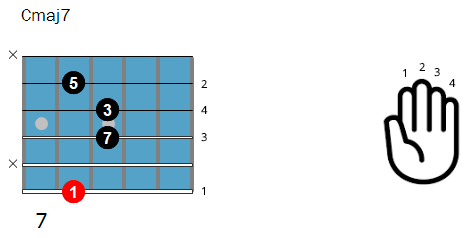 The x symbols at the left side of the chord indicate that those strings are not to be played. This means most of the chords in these chord charts cannot be strummed but must be played fingerstyle, with the thumb and first three fingers of your right hand.

Notice how each chord type only changes one note compared to the next chord type. This can help you memorize the chords and relate them to one another.

Hear how changing these notes alters the chord quality.

The following chord charts show you the easy jazz chords laid out on the fretboard for you to play through and use as a reference guide for further study.

These must-know chord voicings are essential for any beginning jazz guitarist and the minimum requirement to learn jazz standards. If you memorize every chord shape and practice them well, you will be able to play the chord changes of most jazz standards.

Jazz Chords with the Root Note on the 6th String 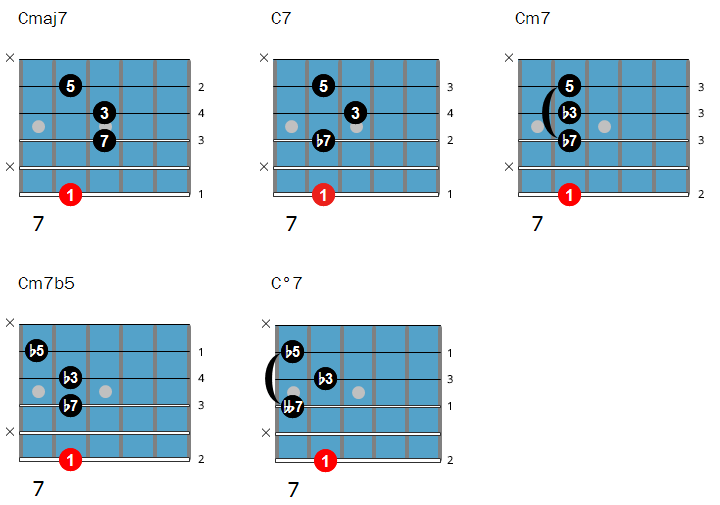 Jazz Chords with the Root Note on the 5th String 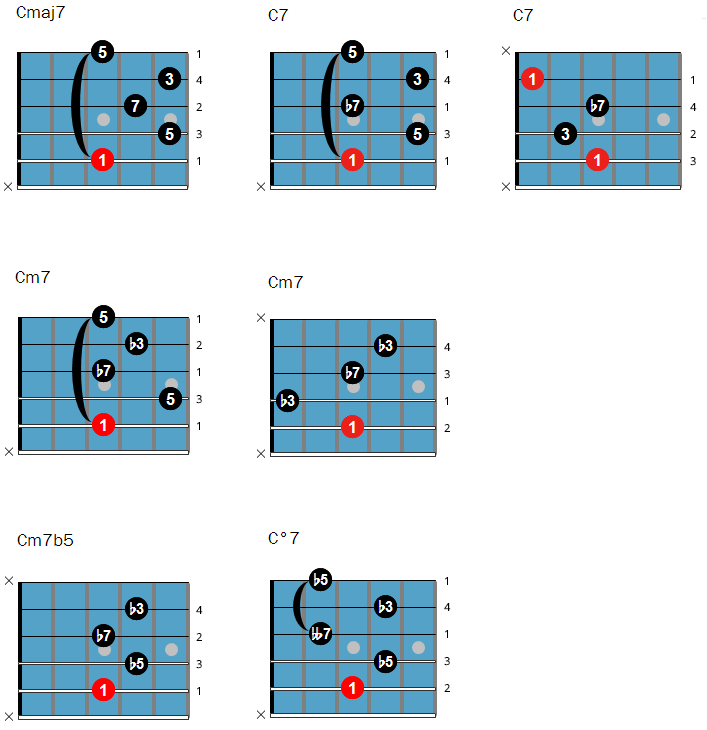 Jazz Chords with the Root Note on the 4th String 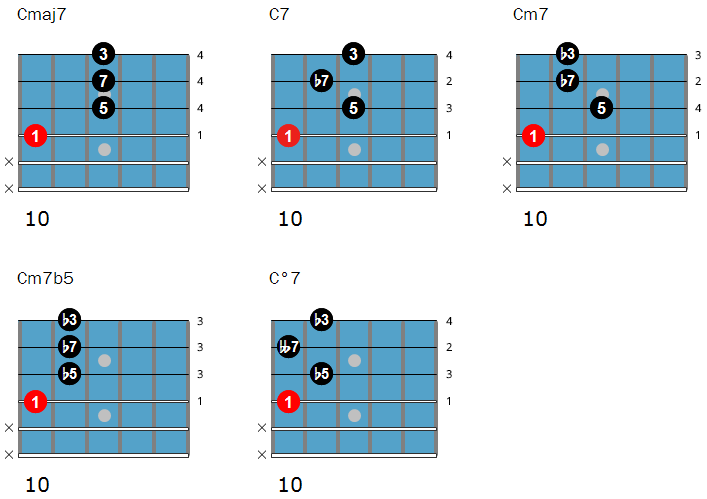 How To Practice Jazz Guitar Chords?

The most fun and effective way to practice jazz guitar chords is playing chord progressions and jazz standards.

Below are four exercises that will get these beginner guitar chords under your fingers.

This vamp in the style of Kenny Burrell is a good exercise to practice minor and major 7 chords.

In this exercise, you will learn three common chords, beginning with F9 (bar 17): 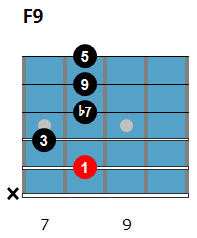 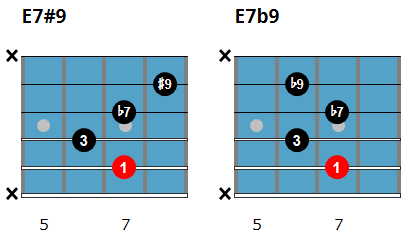 This chord progression exercise introduces a new, but common diminished chord shape (here with G# as the root): 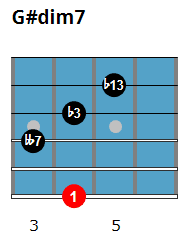 in this exercise, you will be playing a series of 2 5 1 progressions using a simple rhythm so you can concentrate on the chords.

This exercise combines the beginner guitar chords from above with a walking bass line.

When you’re ready with the 17 chords from the chord charts above, it’s time to learn some more chord shapes and chord types.

Here is a chord chart with 9 major chord voicings, which include maj7, 6, and 6/9 chords.

These major jazz chords are often used at the Imaj7 chord in a major key ii-V-I progression. 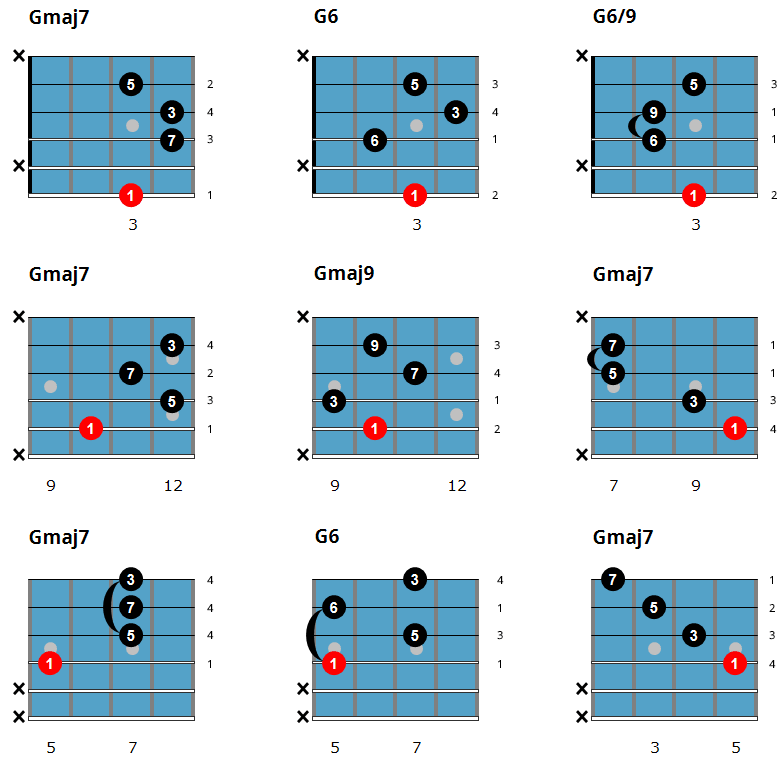 You will now move on to working on dominant jazz chords, which will focus on 7, 9, and 13th chord shapes.

Some of these chord shapes you will already know as they are common blues guitar chords.

These chords are used in jazz blues chord progressions, as well as the V7 chord in a major key ii-V or ii-V-I progression. 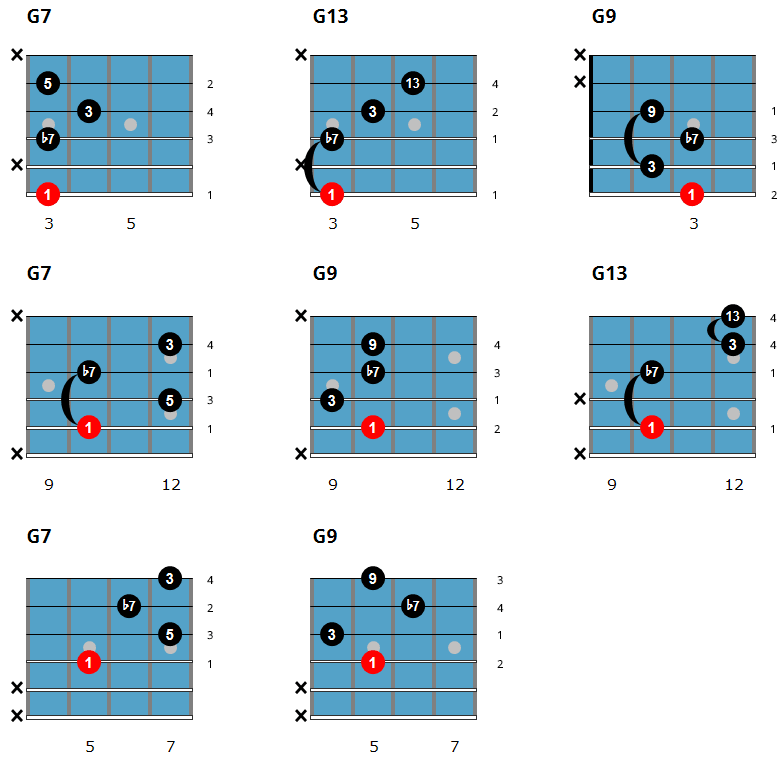 In this section, you will work on minor jazz guitar chords, which include m7, m6, m9, and m11 chord shapes. 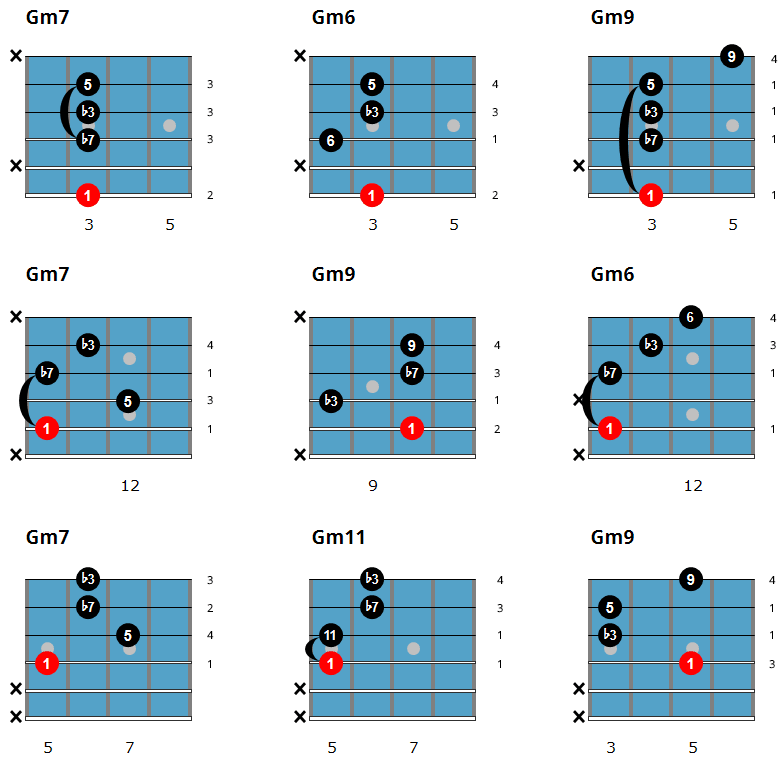 Minor 7b5 Chords (aka Half-Diminished Chords)

The next group of chords focuses on minor 7b5 chords, also called half-diminished chords and written m7b5.

Because there is only one easy shape per string set for these chords, you will only need to learn 3 m7b5 voicings.

Half diminished chords are used as the iim7b5 chord in a minor key ii-V progression.

Diminished chords are often used as passing chords, such as in the chord progression Imaj7-#Idim7-iim7.

They can also be used in place of a 7b9 chord, such as playing C#dim7 instead of A7b9.

The last set of chords that you’ll explore are altered chords, which you will often see written as 7alt on lead sheets. These chords feature the b9, #9, b5 or b13(#5), or any combination of those notes.

Since we are looking at easy jazz chords in this lesson, you will only use one altered note per chord. Over time you might find yourself drawn to use two altered notes when playing these types of chords, such as 7(b9,b5) for example. 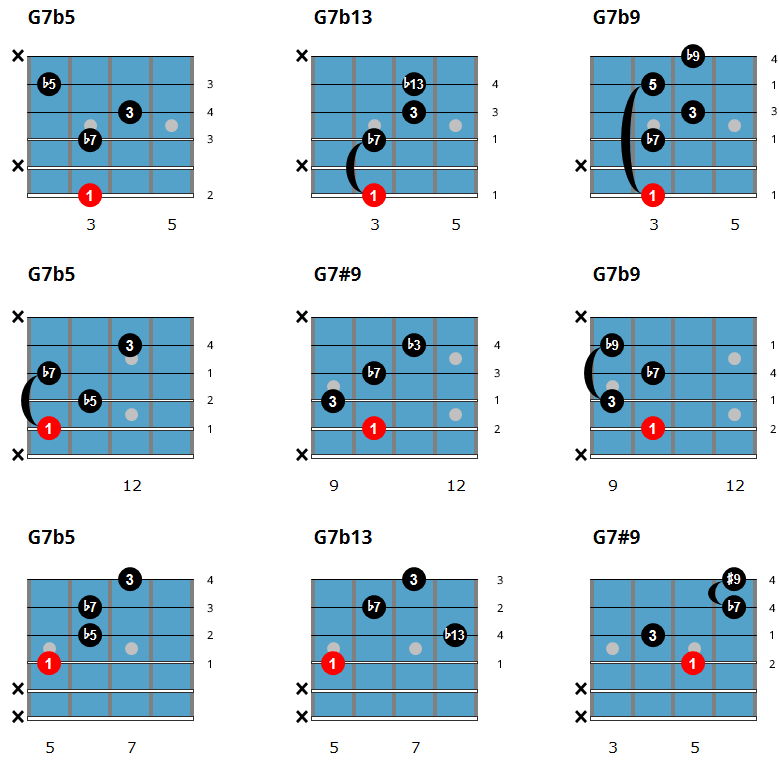 Now that you have checked out these easy jazz chords on their own, it’s time to bring them together and apply them to common jazz progressions.

To begin, here are three ii-V-I-VI chord progressions that use the shapes from this lesson in their makeup. After you have learned these initial examples, make sure to take them to other keys in order to practice them around the entire fretboard.

To start off, here is a ii-V-I-VI in C major that begins with the iim7 chord on the 6th string, and moves around the changes from that starting point.

Next, you will work out the same progression, but this time the iim7 chord is on the 5th string and you will move to the other chords from that initial chord.

Lastly, here is a progression that moves around the fretboard a bit, which is something you might want to do when comping behind a soloist, beginning with the iim7 chord on the 4th string.

The final exercise in this lesson will feature three minor key chord progressions that use a number of the chords featured in the lesson above.

As was the case with the major key examples, feel free to expand upon these chord progressions by taking them to other keys, as well as substitute other chord shapes from this lesson into these progressions.

To begin, here is a minor ii-V-I-bIII progression that begins with the iim7b5 chord on the 6th string and works around the chords from that starting point.

Next, you will begin with the iim7b5 chord on the 5th string and work your way around the progression from there.

Finally, you will begin with the root note of the iim7b5 chord on the 4th string, with the subsequent changes being closely related to that initial shape.

After you have explored these shapes, and if you got stuck or have any observations on this lesson, share your thoughts in the comments section below.

If you want to learn how to play jazz guitar chords step-by-step, check out our best-selling eBook, The Easy Guide to Jazz Guitar Chords.