In this lesson, you will learn 20 ways to play through both major and minor II-V-I-VI chord progressions. The voicings I have chosen are what I call the “in between” voicings, fingerings that are in between the common beginner chords found in jazz chord books, and the advanced “way out” chords heard in the playing of guitarists like Allan Holdsworth, Ben Monder and John Stowell.

These chords are designed to create a sense of tension and release while simultaneously outlining each chord within the progression.

Some of the techniques that will be applied:

So, grab your guitar and let’s learn 20 ways to comp through major and minor ii V I vi chord progressions.

The first example is built out of three note voicings that highlight an ascending melody line: G-Ab-A-Bb.

This progression contains a moving line in both the inner and outer voices:

Note that the first three voicings contain the 3rd and 7th of each chord. The A7b9 contains the 3rd (C#), while the 5th (E) has replaced the 7th for the purposes of voice leading.

The next example contains the same ascending melody line (G-Ab-A-Bb), though this time the line is harmonized in four-note voicings.

The Dm7 chord is built out of a IV (Fadd9) chord (F-A-C-G), which is a common diatonic substitute for a iim7 chord.

The G7 chord contains a 13 (E) as well as b9 (Ab), providing an element of tension which resolves to the Imaj7 chord in bar three.

The VI7 chord also contains a b9, which provides a tension that is resolved when the progression returns to the Dm7 chord in bar one.

The third example is also built around an ascending melodic line, though this time it begins a tone higher: A-Bb-B-C.

As in the previous example, the Dm7 chord is being substituted by an Fmaj7 chord (F-C-E-A).

Over the Imaj7 chord, a Gmaj7 voicing is being used, which has been “borrowed” from the C Lydian mode. This a common substitution for a Imaj7 chord as it provides an F# (#11), which is commonly heard on a tonic chord within a jazz context.

To learn more about modes, check out our Beginner’s Guide to Guitar Modes.

The VI7 chord also contains two tension notes, the b13 (F) and the #9 (C), the same two tensions used on the V7 chord, and these are resolved back to the Dm7 chord in bar one of the progression, as was the case in the previous example.

The next example starts in a similar fashion to example 3 because the Dm7 chord is being substituted by an Fma7 chord.

Though in this progression, the V7 chord only contains one tension note, the b9 (Ab), which resolves to the Cmaj7 chord in bar three, which is being voiced in stacked fourth intervals.

For the VI7 chord, an Edim7 voicing is being used to sound the A7b9 chord.

This is especially effective on guitar because all inversions of dim7 chords are fingered the same on the same string sets.

So in this example (A7b9), you can play the Edim7, slide up to Gdim7, then to Bbdim7 and finally C#dim7 without changing fingerings.

The Dm7 chord at the start of this example is built out of the So What voicings made famous by Bill Evans on the Miles Davis recording Kind of Blue.

This kind of voicing is built by stacking fourth intervals (D-G-C-F), which produces a Dm11 sound (more about this here: Quartal Voicings). Though this voicing uses four notes, Evans would also add a 3rd interval on top of the F (A), during his So What voicing’s to produce a thicker, larger chord.

The G7 chord is also built out of the So What voicings and is played by simply shifting the Dm7 chord up a minor third to Fm11 (F-Bb-Eb-Ab). This produces three tension notes over G7, which all resolve down by half step to the Cmaj7 chord in bar three:

The tonic chord is again built from the So What voicings, by playing stacked fourths beginning on the 3rd (E) of the chord (E-A-D-G). This allows us to play all three chords with only one voicing while creating a modern sounding progression that contains both tension and release within itself.

The A7b9 chord is built from an Edim7 chord, though with the added maj7 (Eb), which comes from the E diminished scale.

These voicings (dimMaj7), can be heard in the music of Ed Bickert and Jim Hall.

Try taking this chord and sliding it up to the next chord tone (G) and back again without lifting your fingers and you’ll immediately remind yourself of every Jim Hall chord solo he has recorded.

Example six is built out of closed position and clustered chord voicings.

The Dm7 chord is being substituted by a Imaj7sus4 chord (C-F-G-B) in closed position.  This is a common diatonic substitution:

The G7 chord is built by stacking a cluster (F-Ab-Bb) over top of the third of the chord (B). This creates both b9 (Ab) and #9 (Bb) tension tones that are resolved into the Imaj7 chord in bar three.

The VI7 chord contains both the b9 (Bb) and b5 (Eb) tensions which are resolved when returning to the Dm7 chord in bar one: 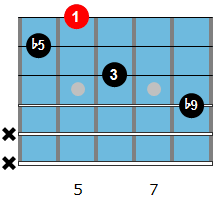 This voicing may be a bit of a stretch for some of us. If so, you can play the A in the bass and the Bb in the melody, which eliminates the tricky stretch: 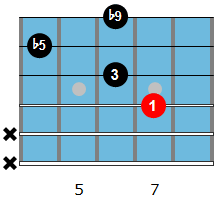 For the next example, we will return to using three note voicings, as was the case in the first example.

Again we are using an F chord (F-A-C) in place of the Dm7 chord.

The G7 chord contains the tri-tone (F-B), with a b9 (Ab) stuck in the middle to create tension.

This tension is then released into an Em triad which is being played in place of the Imaj7 chord. This triad is commonly used in place of a Imaj7 chord as it contains all the tones of the chord minus the root, which would be played by the bass player anyway.

The A7b9 chord is also built off of an E note, with the C# being the only note different than the previous bar.

The next example is an extension of the previous one, where the chords are very similar with one upper note being added to the three-note chords from example 7.

The next example uses spread voicings to outline each chord in the progression.

These chords are often referred to as “Drop 2 and 4” voicings or by their string sets, 5421 voicings.

The last major key example is built out of closed voicings, where each chord is built with the smallest interval possible being used between chord tones.

We will now take a look at ten minor ii-V chord progressions by starting with a technique that is similar to that seen in example five. The Dm7b5 voicing in bar one is then played a minor third higher in bar two as an Fm7b5 chord:

For the last bar an Eb7 chord (bII of Dm7b5), is being used to turn the progression back around to the iim7b5 chord in bar one. This voicing is built by playing a GdimMaj7 which produces an Eb7#9 sound:

The next example begins with the same two chords heard in the last progression, though instead of continuing upwards, it resolves down to the tonic chord, being substituted by an Ebmaj7#5 chord, in bar three:

The tonic chord contains both the major 7th and 9th chord tones, and the augmented fifth interval between the Eb and B gives this voicing a dark quality that helps define the tonic minor sound.

The Eb7 chord in this progression is built off of a dimMaj7 chord as in the previous example, except it is now built off of the b9 (E), note which produces an Eb7b9 sound.

Here we have the same technique, moving up by minor then major thirds, but the voicing has changed to contain the 11th (G) of Dm7b5. G7 contains the #9 (Bb) and Cm7 contains the 9 (D).

This D then moves down by a tone to the C (3rd) of the Am7b5 chord in bar four, which provides a nice sense of voice leading between these two chords.  The Am7b5 (vim7b5) chord is commonly used in the fourth bar of a minor ii-V-i-vi progression as it resolves by fourth to the Dm7b5 chord in bar one and comes from the tonic (C) minor key center.

In the next example, we will move away from the parallel movement found in the previous three progressions.

The next progression begins with the same drop 2 voicing being used for the Dm7b5 chord in bar one.

Instead of a Db7 chord in bar two, the G7 chord is now substituted by a Db9 chord, where the 9th (Eb) of Db becomes the b13 over the G7 chord.

The Cm7 chord still contains the F and B from the previous example, though it is now in a different voicing, one that is built out of an Eb#5add9 chord shape.

The Am7b5 chord is second inversion drop 2 voicing with no added notes.

In this example, the bVI7 chord (Ab7) is being substituted for the Dm7b5 chord in bar one. This is a common substitution, as the Ab7 is a tri-tone away from Dm7b5, and it resolves by half-step down to the G7 in bar two.

The Cm7 chord uses an Ebmaj7 drop 3 voicing, while the Eb7 chord contains the #11 (A) tension tone.

Notice how now, with the Ab7 chord in bar one, the Eb7 chord becomes the V/bVI and resolves by a fourth back to the first bar.

The following example uses closed position voicings to outline each chord in the progression.

The Cm7 chord is being substituted by a B7#5 chord, which produces a CmMaj7(6) sound:

This progression begins with a Cm11b5 chord being substituted over the Ab7 chord, which produces an Ab13 sound.

This is then voice led down by a half-step to a Bmaj7#11 chord, which is substituting the G7 chord producing a G7#9b13 sound:

The tonic chord is being substituted by a Bbmaj7sus4 chord which produces a Cm13 sound.

The Eb7 chord is being substituted by a Dbmaj7#11 chord which produces an Eb13 sound.

The last example is built out of the descending Ab-G line in the lower voice.

The G7 chord is built from an Abdim7 chord which produces a G7b9 chord with the b9 in the bass.

The Cm7 chord is built by stacking fourths above the fifth (G), to produce a Cm11 sound.

Now that we’ve explored these examples of II-V progression in major and minor keys, you can try to build your own voicings using the techniques explored above.

Try taking any II chord, in major and minor keys, and voice lead it up by moving the melody in half-steps or try the same technique descending.

Or try taking different chords from different examples (the IIm7 chord from one, the V7 from another etc.), and mixing them together to form new progressions that you can call your own.