Most of the guitar chords we use in jazz are constructed by stacking thirds. There are also chords based on stacking fourths instead of thirds. These quartal chords were made popular by McCoy Tyner (John Coltrane’s piano player) and Bill Evans (for example on Miles Davis’ standard So What from the album Kind of Blue).

Quartal voicings have a jazzy sound and work very well in modal music, but can be used on any jazz standard. In this lesson, you will learn how to construct quartal chords, how to use them on guitar and you will also play through some comping and soloing examples.

Let’s have a look at how quartal harmony works…

We start with the D Dorian scale (if the Dorian mode is new to you, check out this guitar modes lesson first):

Let’s build a chord on the first note of the D Dorian scale, but instead of stacking thirds we’ll be stacking fourths (if chord construction is new to you, check out this chord theory lesson first):

The result is a chord you could call a Dm11, but I don’t want to give names to these quartal voicings because they behave like harmonic chameleons:

Let’s build a quartal chord on the next note of the D Dorian scale (the result is an Em11):

We can do this for all the notes of the D Dorian scale, but I think you get the picture by now…


Quartal Chords on the Guitar Neck

Let’s have a look at how quartal voicings look on the neck.

I like to look at and use quartal voicings more as a harmonized scale than as actual chords: they are very usable as a solo improvisation device. They also work well for accompaniment or for creating vamps.

Here are all the quartal chords of the D Dorian scale on string set 2-3-4-5:

If you played through the previous chords, you’ll notice there are only 4 chord shapes you need to remember: 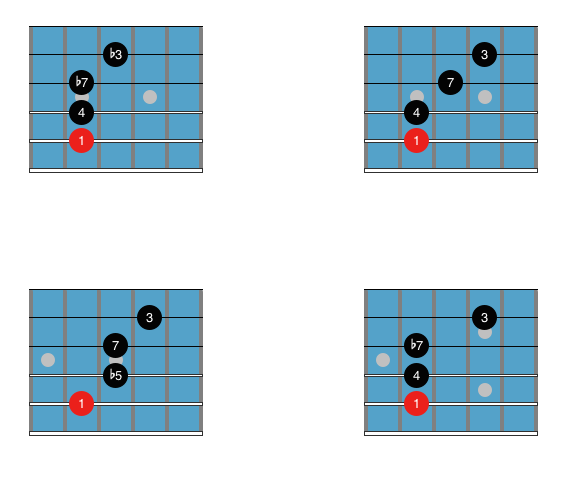 And here are all the quartal chords of the D Dorian scale on string set 1-2-3-4:

Here are the guitar chord diagrams for the 4 chord shapes you have to remember: 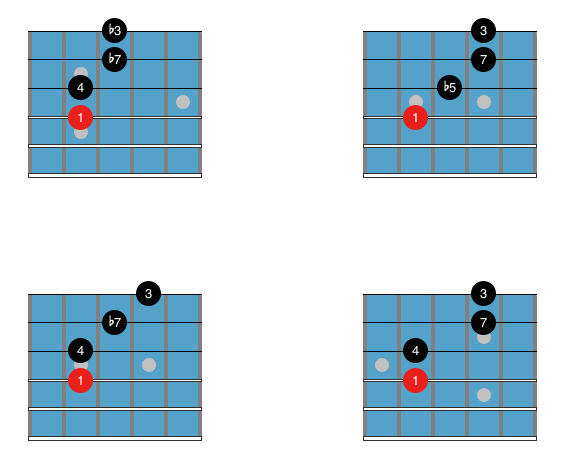 How to Use Quartal Chords

To help get you started with applying quartal chords to your jazz guitar comping and chord-soloing ideas, here are three examples of how you would apply these cool-sounding chords to a ii-V-I chord progression.

Notice how certain quartal chords will sound more “inside” the changes, while others will sound a bit more “outside” the given chord. This is the reason that so many players love to use these chords in their comping and soloing, the fact that they can both sound inside and outside the changes even when using notes from the underlying parent key of the progression.

This second example uses a technique that McCoy Tyner loves to use in his playing, as well as the great jazz guitarist Joe Diorio among others.

The idea behind this riff is that you play the quartal chord for Dm7, then you play the same shape up a minor 3rd interval, creating tension in your line that is then resolved down a half-step to the Em7 quartal chord over Cmaj7.

It’s not for everyone’s tastes, but it can be a great way to add a sense of modern jazz tension and release to your chord work.

Here is an example of that same minor 3rd approach, only applied to a longer phrase and to each chord within that phrase.

Again, this will create a strong sense of tension in your lines, so you need to practice not only moving up a minor 3rd with these chords, but more importantly, resolving them after creating that tension.

In this section, we’ll take a look at how you can derive fun and cool-sounding 3-note chords from the A Dorian mode, which you can then use to create chord soloing, comping and chord melody lines over m7 chords in your jazz guitar endeavors.

If you know other Dorian mode fingerings that’s cool, but for the sake of this lesson, it will be worth getting this one under your fingers as it is going to be used to create the three-note Dorian chords below.

This will help get the sound of the scale into your ears and get the scale under your fingers before moving on to the more difficult, 3-note Dorian chords further below.

What you are going to do is just play the 5th fret followed by the 7th fret, with three notes being plucked/strummed at the same time to form each 3-note Dorian chord.

Here is how that will look like on paper, and sound against an Am7 chord. Once you have learned how to play these chords, try comping or soloing over an Am7 chord and use only these shapes to create your chordal lines and phrases.

As a guide, try using your index finger on the 5th-fret chords, and then use your ring finger on the 7th fret chords. This will allow for a smooth transition between each chord as you move up and down the scale shape in a comping or soloing situation.

To help you get started with bringing these quartal chords into your soloing ideas, here is a sample lick where these chord shapes are used to break up single lines being played over an Am7 chord.

While soloing with a Dorian mode (or the 3-note chords) isn’t that difficult on its own, it can be tricky to get the transition from single-notes to chords smooth and fluid on the fretboard.

Try learning this lick first, slowly with a metronome, and then build up speed from there. Once you have the lick down, put on an Am7 backing track and solo over that chord as you move between single-notes and chords, perhaps every bar or every two bars throughout the solo.

As well as playing each chord as a 3-note chunk as we did in the previous two examples, you can arpeggiate these chords to break them up into single lines that you can then use to improvise over minor 7th chords where you want to deliver a Dorian vibe to your phrases.

Here is an example of how you can arpeggiate these chords, in this case starting on the lowest note and picking up to the highest note of each 3-note chord.

Try using your fingers, pick and fingers or alternate picking to get the best results as far as rhythm and groove are concerned.

If you are into sweep picking,  you might be able to work that technique over these chords, but often times sweeping leads to inaccurate rhythms with these shapes, so if you find you are having trouble just switch to alternate picking instead.

Once you have a handle on the ascending arpeggio, you can also practice starting on the highest note and arpeggiating down the chords, and then mixing the ascending and descending versions together.

Here is an example of the descending version of these chords, which you can practice from a technical and improvisational standpoint.

To finish up, here is a sample lick that uses both the ascending and descending versions of the arpeggiated Dorian chords.

Start by learning this lick as written, then write out a few similar licks of your own, before fully improvising with the arpeggiated 3-note Dorian chords over a modal vamp or a tune where you have minor 7th chord shapes and sounds.

Do you have a question about quartal chords? Share your thoughts in the comments section below…