Major chords are one of the most commonly used and important to learn jazz guitar chord shapes. They are found in just about every major-key jazz standard in the repertoire. Maj7 chords are essential knowledge for any jazz guitarist to have under his fingers, in different inversions and on various string sets of the guitar.

Major chords are used as the tonic chord in a major key, and the resolution chord in the famous ii-V-I chord progression. 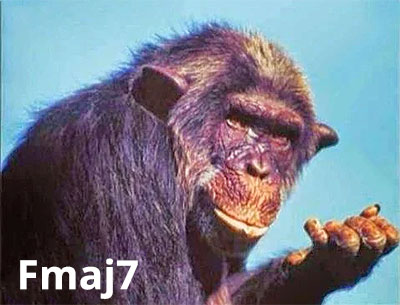 This lesson will help you understand how to build, play, practice, and apply maj7 chords in your jazz guitar playing.

The most important major chord type is Maj7, but there are plenty of other major chord variations, such as major 6 chords and major augmented chords.

Here’s a list of the major chord types you will learn in this lesson:

Before you begin your study of major chords on the guitar, let’s take a look at a definition for these commonly used jazz chords.

Maj7 chords are four-note shapes that contain the interval pattern 1 3 5 7.

To help you hear and see these chords in action, here are two closed-position maj7 chords, meaning that all intervals 1 3 5 7 are played in order on the guitar.

While these two shapes sit well on the fretboard, most closed position chords are tough to play, which is why we shuffle around the intervals of the chord to form new shapes on various string sets of the guitar.

Learning how to play major chords in different inversions and on various string sets around the fretboard will be the focus of this lesson.

Memorize these and start using them over chord progressions and jazz standards as soon as possible. 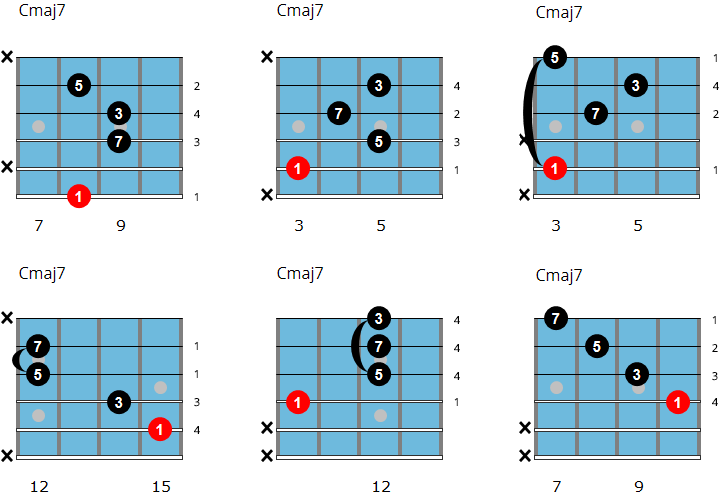 To begin our study of major jazz guitar chords, let’s take a look at drop 3 chords of the major type with the lowest note of each chord on the 6th string.

Drop 3 Maj7 chords are built with the following interval structure:

Here are the four Cmaj7 drop 3 chords with the lowest note on the 6th string that you should learn and then take into 12 keys as you explore these shapes further in the practice room.

Since the interval structure of drop 3 chords with a 5th-string root is the same as those on the 6th string, you can start by playing these shapes on the fretboard right away.

Here are the four inversions of drop 3 Maj7 chords on the 5th string:

Though drop 2 chords use the same intervals as drop 3 chords (1-3-5-7), they are played in a different order, which gives these shapes their own unique harmonic sound.

Here are drop 2 Maj7 chords written out as intervals in order to help you get this knowledge into your theoretical tool belt before taking them onto the fretboard.

With the theoretical knowledge under your belt, here are four inversions of drop 2 Cmaj7 chords with their bass note on the 5th string:

The final group of major chords you will learn in this section are based on the top four strings.

Often used in Bossa Nova tunes, Maj6 chords have a “softer” sound than their Maj7 cousins and are built by lowering the 7th of a Maj7 chord by 2 frets, or one whole step.

When doing so, you are building the relative minor chord shape for the original Maj7 chord.

For example, if you take Cmaj7 and lower the 7th by two frets, you form C6. C6 has the same notes as Am7, the relative minor.

Major 6 chords are notated without the “Maj” part. For example, a C major 6 chord is notated as C6.

Besides being used in Bossa Nova, major 6 chords are also a good option to end a tune because they sound more stable compared to major 7 chords.

Here are 4 common C6 voicings that you should memorize and apply to jazz standards: 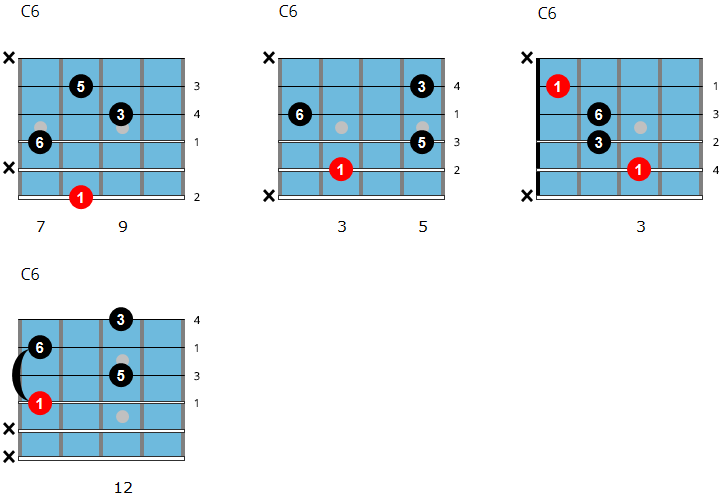 Next, you will add the 9 to the major chord, making it more colorful.

The above voicings all contain the 3 of the chord.

There is also a set of major 9 voicings you can use where the 3rd is omitted.

Next, we are going to combine the 6 and the 9 in a major chord. In such chords, we don’t play the 7th.

Major 6/9 chords are a good choice to end a tune on. 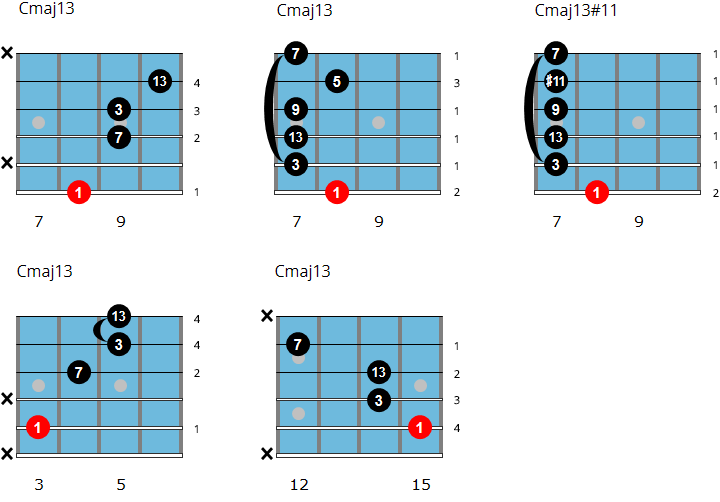 Maj7#11 chords are also known as Lydian major chords. They are usually played on a IVmaj7.

These chords are ideal to end a tune with a bit of tension. 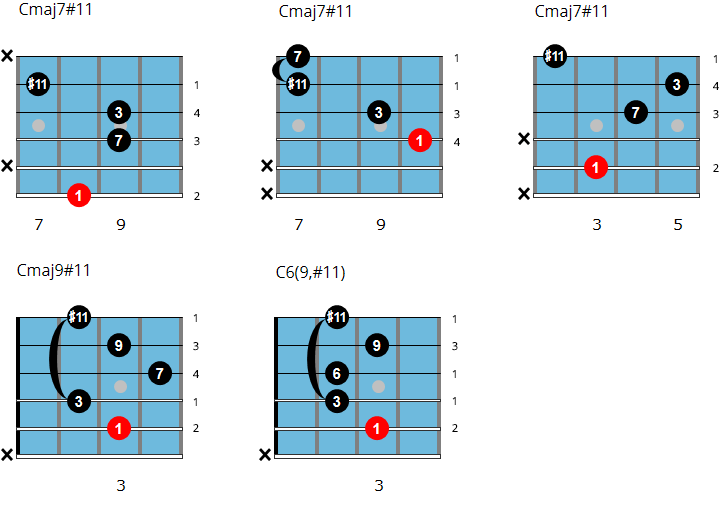 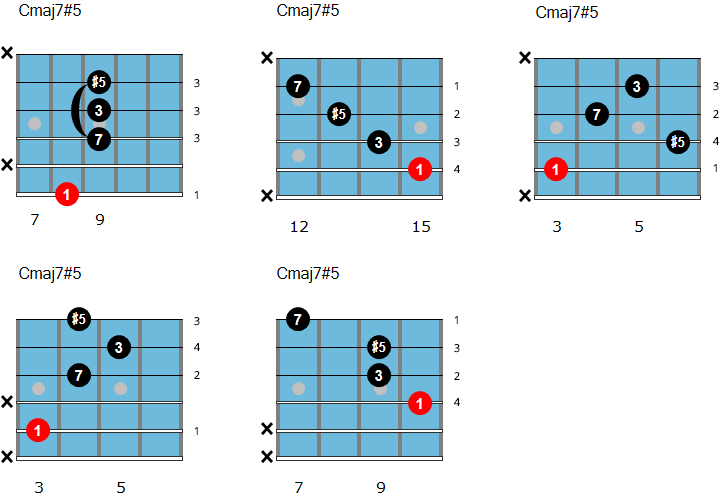 How To Improvise Over Major 7 Chords

Here are 4 tools you can use to solo over major 7 chords.

The major scale (aka Ionian mode) is the obvious choice of scale to play over a major chord. The Ionian mode is played over I chords, in II V I chord progressions for example.

Something to look out for when using the major scale: the 11 (F in C major) is a so-called avoid note for major chords because it is one half step above a chord note (the 3 or e). This does not mean you can not play this note but is rather disharmonic when you keep hanging on it or use it as a target note.

Over the Cmaj7 we play the C Ionian scale:

Here’s the C Ionian mode in its root position on the guitar neck:

Here is an example of a C major scale lick in the style of Pat Metheny:

The major bebop scale is a major scale with a chromatic passing tone between the 6 and 5 (b6).

A C major 7 arpeggio is obviously a good choice to play over Cmaj7 chords.

An em7 arpeggio over Cmaj7 gives you the 9 sound:

In this example I play an Em7 arpeggio combined with chromatic notes:

An effective way to outline the harmony of a song is by playing single note lines that follow the shape of a guitar voicing.

Play the chord voicing like you would play an arpeggio, fret one note at a time and do not let the notes ring.

The following guitar lick uses the outlines of basic chord voicings, starting with a Cmaj7 shape, going to a G triad, and back to a Cmaj7 shape.

How to Improvise over Major 6 Chords

The 7 and 11 are omitted, which gives this scale a bit more basic and less colorful sound. Such a sound can be effective for major chords with a strong tonic function (like ending chords) or for traditional jazz styles like swing.

The E minor (=G major) pentatonic scale has every note of the C major scale minus the 1 and 11,

The Am7 arpeggio gives you the C triad + the 6.

How to Improvise over Major #11 Chords

The Lydian mode is the 4th degree of the major modes and is played over major chords that have a IV function.

Its only difference with the normal major scale is the #11. Because the 11 is raised a half tone, there is no avoid note in the Lydian mode.

The B Minor Pentatonic Scale

The B minor (=D major) pentatonic scale works well over major #11 chords. This scale contains the 3 and 7 + all the tensions.

You can also use the B minor blues scale.

In this example, I start with a blues lick and end with an F#m7b5 arpeggio.

A Gmaj7 arpeggio is a good choice to play over Cmaj7#11 because it contains both the 9 and #11.

A Bm7 arpeggio is good for ad lib phrases on ending chords because it contains the 6, 9 and #11, all popular tensions for end voicings.