When learning how to play jazz guitar chords, one of the uncommon, yet cool-sounding shapes, which you will run across, is the maj7#5 chord (aka augmented major seventh chord). Though it is not as commonly used as the maj7 or maj7#11 chord shapes, the maj7#5 chord is an interesting sound that you can add to your jazz guitar vocabulary over static maj7 chords, as well as ii V I progressions.

To help you get your fingers, ears, and mind around this major 7 chord alteration, you will learn how to build maj7#5 chords, how they can be applied to your comping, how you can improvise over them, as well as study a comping etude in order to bring these ideas to a musical situation.

An augmented major seventh chord is a maj7 chord with the 5th note raised by one half-step (one fret), to produce the #5 interval on that chord shape. Formula: 1 3 #5 7

Here is how those two chords look on paper so you can see the one-note difference between the two.

Here are 8 different maj7#5 chord fingerings that you can practice in order to get your fingers around these chords. 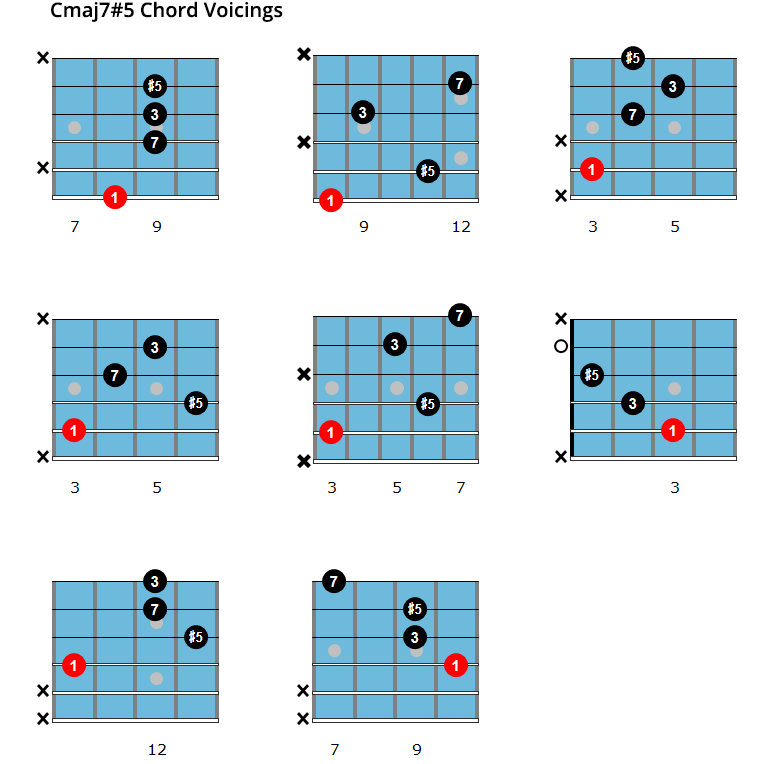 As was mentioned earlier, you can take any maj7 chord you know, in any inversion, find the 5th and raise it by one fret in order to create a maj7#5 chord. Try this out with your favorite maj7 chords, writing them down to keep a chord dictionary that you can refer to in your future practice sessions.

With the knowledge of how to build a maj7#5 chord under your belt, let’s take a look at how you can apply this interesting sounding chord to your comping ideas in a jazz setting.

Since this chord is built by altering a maj7 chord, you can theoretically use a major augmented 7 chord in place of any maj7 chord when playing tunes, just be aware that it will create tension when substituted for the more smooth-sounding maj7 chord.

In order to deal with this added tension, some players will use the #5 as a passing tone between the 5 and 6 of the maj7 chord.

Alternatively, you can resolve the #5 up to the 6 or down to the 5th of the underlying chord in order to create tension, but also resolve it over that change as well.

Here is an example of a ii V I in C major where the maj7#5 chord is added in place of the Cmaj7 chord, but not resolved as the tension is left to hang over the Imaj7 part of that progression.

In the next example,  the Cmaj7#5 is used over the Imaj7 section of the progression, but in this case, the #5 note is resolved down then up in order to provide a resolution to the tension that that note creates in the progression.

To help you practice the maj7#5 chord in a musical situation, here is a sample chord study written out over the Miles Davis standard Tune Up.

In this study, I’ve used the maj7#5 over each Imaj7 in the tune, with the same passing note pattern being used for each Imaj7 that occurs in the progression.

As well, I’ve used some new maj7#5 chord shapes as compared to the previous sections of this lesson in order to help you expand your vocabulary at the same time.

Go slow with this comping study, work it with a metronome, and then take it to a backing track.

When learning to solo over major family chords, many jazz guitarists explore the Ionian mode (Maj7) and the Lydian mode (Maj7#11), but there is a third major chord color, and that is the Lydian augmented sound (Maj7#5).

Though you don’t see many Maj7#5 chords in jazz standard situations, especially compared to Maj7 chords, you can use the Maj7#5 arpeggio, pentatonic scale, and mode to add tension and color to your Maj7 soloing lines.

So, before we dig into these Maj7#5 melodic devices, keep in mind that you can use these devices to solo over Maj7#5 chords when you see them, but you can also use them to add a #5 color to any Maj7 chord you see in your playing.

Maj7#5 arpeggios are built by playing the four chord tones that make up the Maj7#5 chord (1-3-#5-7). If you already know your Maj7 arpeggio shapes, you can also take any Maj7 arpeggio, raise the 5th by 1 fret, and you will have created a Maj7#5 arpeggio in the process.

Here is a Gmaj7#5 arpeggio from the 6th string root note. 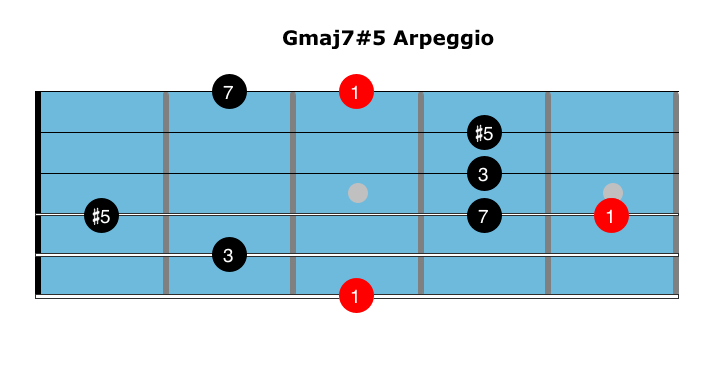 Moving forward, here is a Gmaj7#5 arpeggio from the 5th-string root note.

As well as working these shapes in various keys around the fretboard, make sure to put on a Gmaj7#5 backing track and practice soloing over that static chord vamp using one or both of these arpeggio shapes to build your improvised lines and phrases.

Though many of us are familiar with modes and arpeggios over chords such as Maj7#5, you might be surprised to know that you can also play a pentatonic scale over these augmented chords.

To begin your study of this 5-note scale, here is a GMaj7#5 pentatonic scale that you can practice in the given key, as well as take into other keys as you expand upon this sound in your studies. 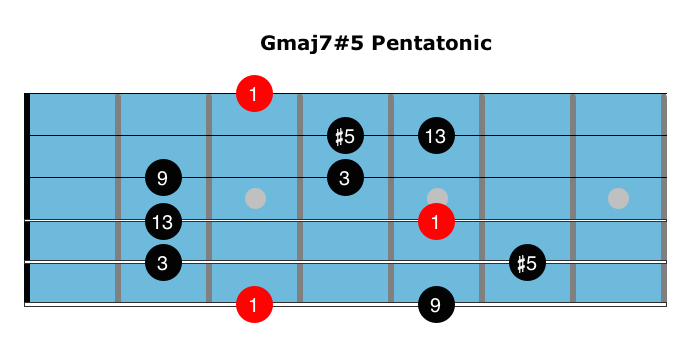 As well, you can learn to play this pentatonic scale from the 5th-string root, which you can see below from the root note G. 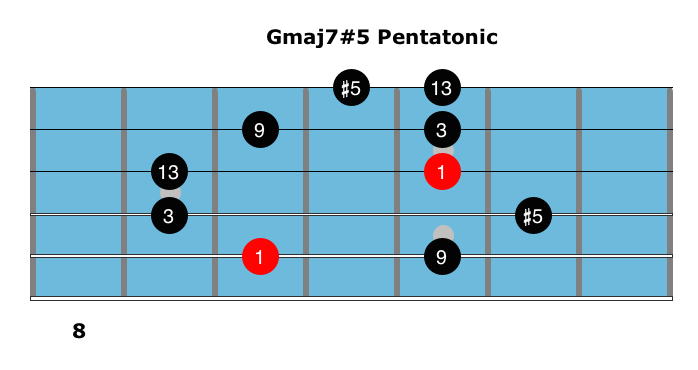 Once you have these shapes under your fingers, try applying them to your soloing practice by improvising over a Gmaj7#5 backing track and using these scale shapes to create your lines and phrases. From there, you can mix the Maj7#5 arpeggios and pentatonic scales together in your lines to hear how these two melodic devices compare and contrast in your solos.

The last melodic device you will study in this lesson is the Maj7#5 mode, also known as the Lydian augmented scale. This scale is the 3rd mode of the melodic minor scale, and so for Gmaj7#5 it is like playing an E Melodic Minor Scale starting from the note G.

You can also play the Lydian augmented scale from the 5th-string root note, which you can see in this example written from the root note G.

Here are three sample licks that use the arpeggio, pentatonic scale, and mode from above.

This first sample lick uses the Maj7#5 arpeggio over the Cmaj7 chord in the progression below.

Moving on, the second lick uses the Maj7#5 pentatonic scale over the Cmaj7 chord in the given progression.

Lastly, here is a Maj7#5 mode applied to the Cmaj7 chord in the chord progression below.

After you have learned these three sample licks, try writing out 3 lines of your own in order to take these melodic devices into a practical, musical situation in your own studies.

Do you have a question about the maj7#5 chord? Share your thoughts in the comments section below.