Understanding guitar modes isn’t as hard as many people believe it to be. The theory can be a bit confusing, but once you get a hold of the basic concepts, it’s actually quite easy to use modes on the guitar. In this lesson, you’ll learn what the modes are, how they look on the guitar and how you can use modes in your solos and improvisation.

What Are Guitar Modes?

Modes are scales derived from a parent scale. All 7 modes have the same notes as the parent scale, but start on a different note, which defines the tonal center.

What is the difference between a scale and a mode? While the words mode and scale are used interchangeably, there is a difference between the two. Modes are inversions of a scale. For example, the 7 modes on this page are inversions of the major scale. Every mode is a scale, but not every scale is a mode (the melodic minor scale or the blues scale for example are not modes).

Why should you learn and use guitar modes?  Being able to play and use guitar modes is an important skill for any guitarist to have because each mode has a unique feel and sound that you can use to make your improvisation more colorful and interesting. Studying modes helps you to navigate the guitar neck and helps you to understand the relationship between scales and chords.

Here’s a chart containing the 7 modes of the C major scale. It shows the most common position for each mode, but each mode can be played over the entire guitar neck and should be practiced that way.

Make sure to read on and play the exercises below the chart to understand how these modes work on the guitar.

The first step in understanding guitar modes is defining the parent scale.

You probably have played modes on the guitar before, probably without realizing you were playing them. Can you play a C major scale? Then you know the first mode (out of 7), the Ionian mode…

Here’s a list of all 7 modes of the C major scale in order:

Let’s go back to our parent scale, the C major scale (aka C Ionian mode). In music theory, we number each note of the scale, going from 1 to 7. This is called the scale formula.

Let’s play the C major scale starting from the second note (D). This is the second mode, called the Dorian mode. The 3rd and 7th note are a half step lower compared to the Ionian mode, that’s why we put a ‘b’ before 3 and 7. Here are the notes of the D Dorian mode:

Now let’s play the C major scale starting from the third note (E). This is the third mode, the Phrygian mode. The 2nd, 3rd, 6th and 7th note are a half step lower compared to the Ionian mode. Here are the notes of the E Phrygian mode:

We can continue this for the other notes of the major scale, but I guess you get the picture by now. If you scroll down a bit you’ll find a list of all 7 modes.

Each mode has a related chord. We can find that chord by stacking thirds on the first note of the mode. We’ll only touch briefly on this subject here. If you’re not familiar with this essential part of music theory, head over to this lesson: Jazz Guitar Chord Theory.

Let’s do this for the C Ionian mode: C E G B. The result is a Cmaj7 chord:

If you build a chord on the first note of the D Dorian mode you get D F A C, a Dm7 chord:

Here’s an overview of the 7 modes of the C major scale, their formula and corresponding chord:

How to memorize guitar modes?

You should memorize the names of the modes + the formula. Here’s a mnemonic trick to help you remember the names (the letters in bold correspondent to the first letters of the modes):

How to Use Modes on the Guitar + Examples

Next, you’ll learn how modes are played on the guitar. We’ll also have a look at some typical examples (there is a sample lick included with each mode so you can hear how guitar modes are used).

Use all your senses when learning guitar scales: use your ears (most important), your eyes (recognize the pattern on the fretboard), your brains (memorize the guitar scale formulas) and your fingers’ muscle memory.

represents the root or 1 of the guitar scale. The letter inside the box is the note name.

The Ionian mode is also known as the major scale. 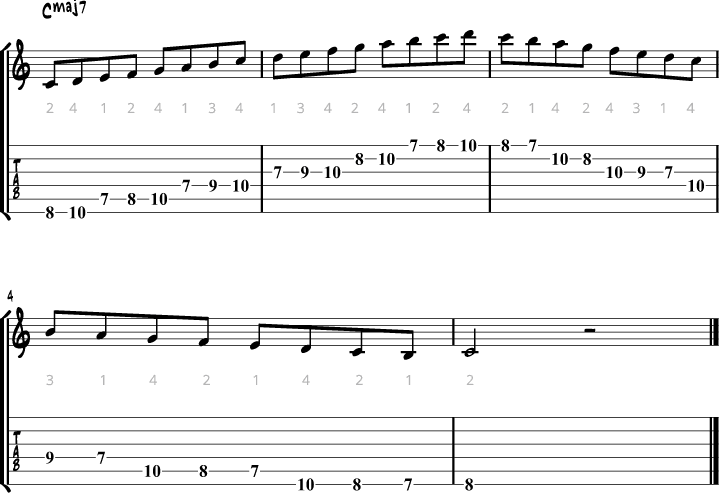 The following example lick only uses notes of the C Ionian scale. It starts with a 1235 pattern on the 5th, followed by an enclosure of the 3rd and finishes with a descending scale run.

There is also a longer Ionian scale study more below in this lesson.

The Dorian mode is almost identical to the Aeolian mode (or natural minor scale), except for the 6th note. 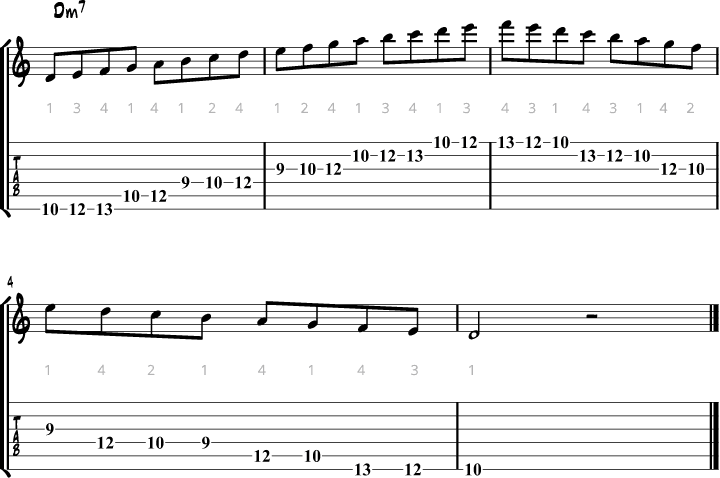 The following lick only uses notes of the D Dorian scale and puts emphasis on the 6 and the 9, 2 characteristic notes of the Dorian mode.

There is a longer Dorian scale study more below in this lesson. 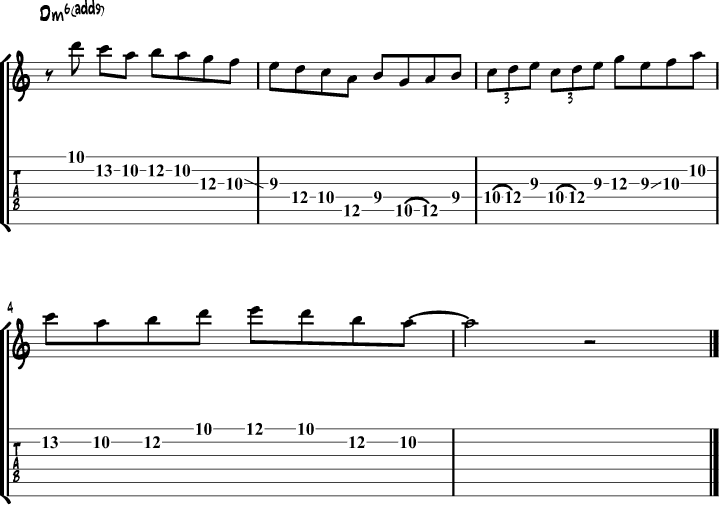 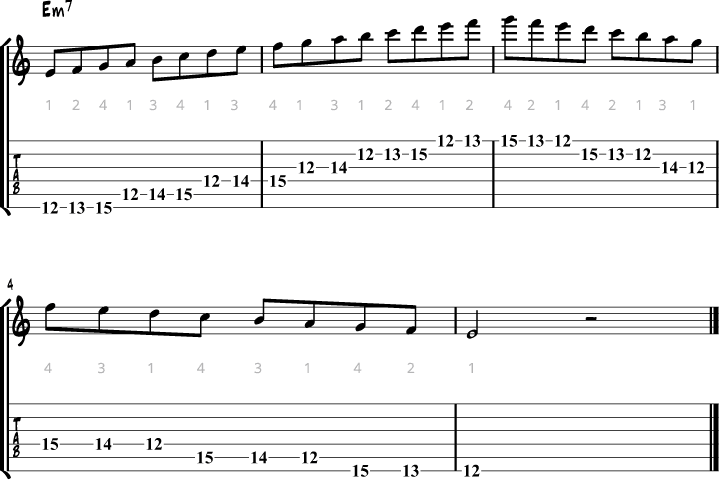 The following example only uses notes of the E Phrygian scale and puts emphasis on the b9 and b13, two characteristic notes of the Phrygian mode. 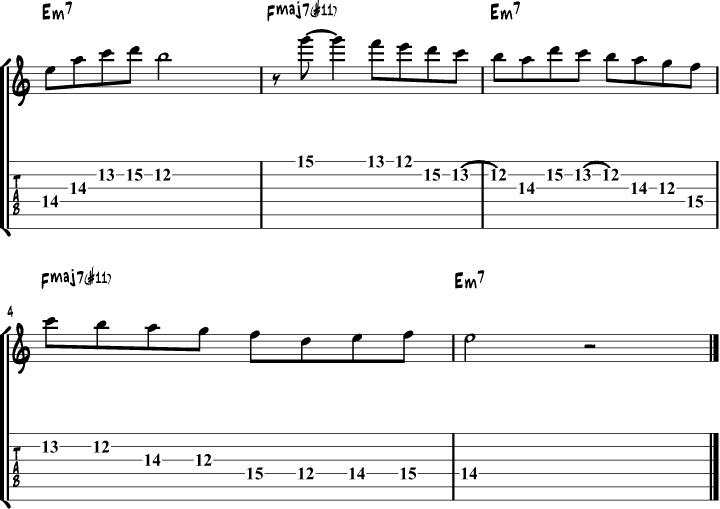 The Lydian mode is almost identical to the major scale, except for the 4th note (#4). 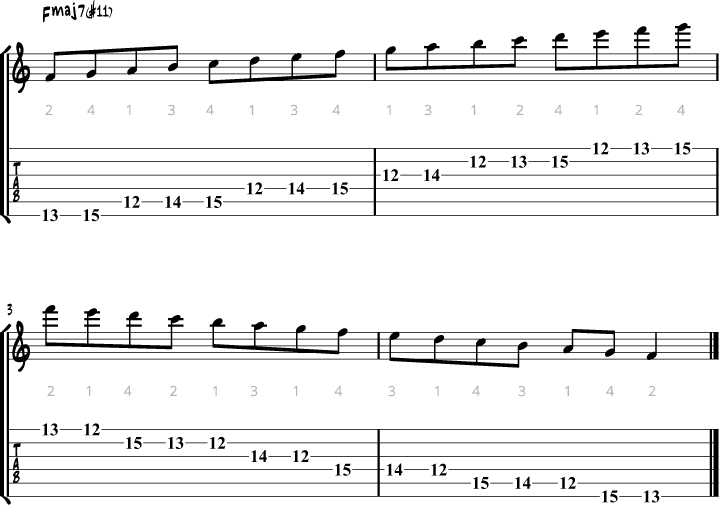 The following example only uses notes of the F Lydian scale and puts emphasis on the 7 and #11, two characteristic notes of the Lydian mode. 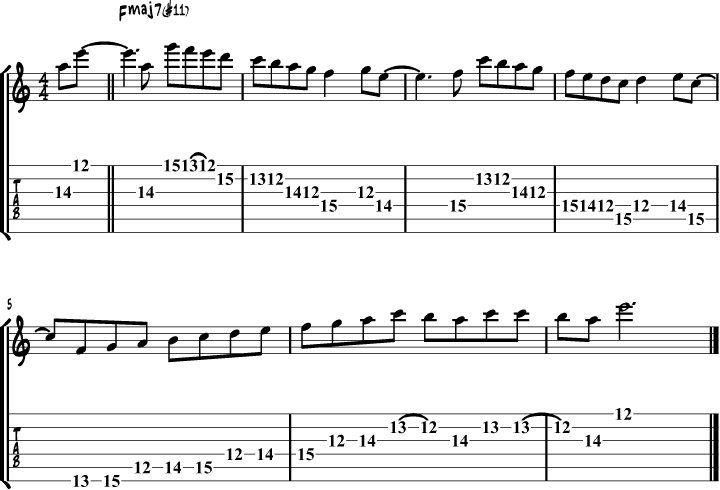 The Mixolydian mode is almost identical to the major scale (or Ionian mode), except for the last note (b7). 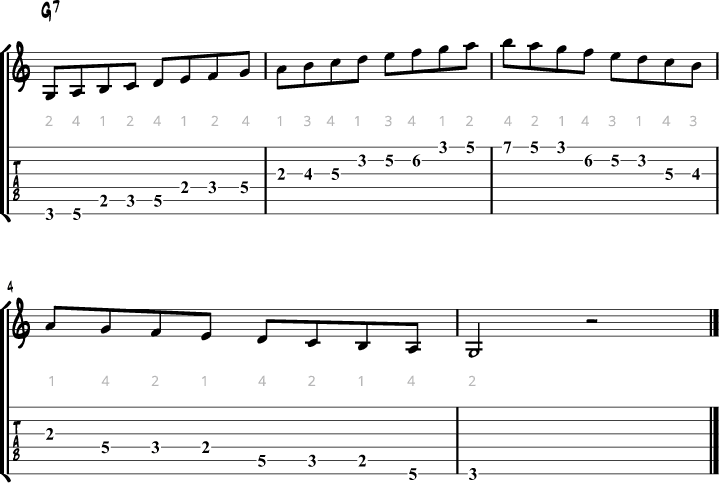 This next lick is based on the G Mixolydian scale. 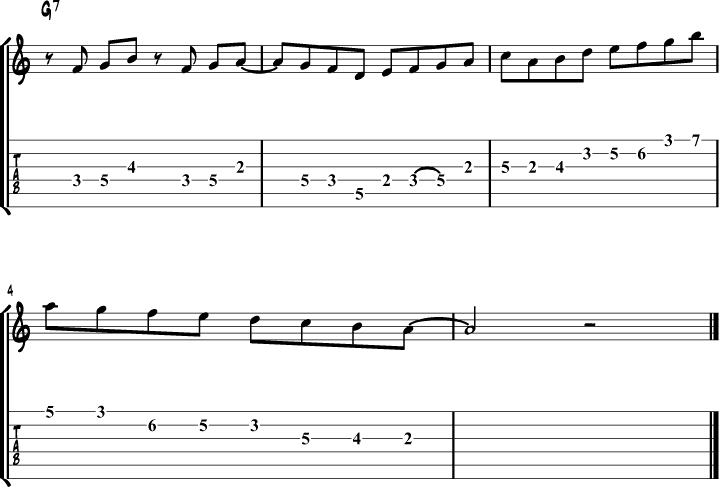 The Aeolian mode is the same scale as the natural minor scale. 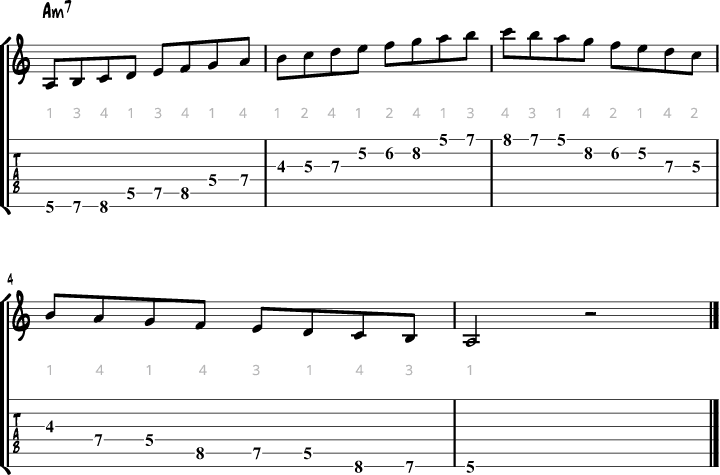 This lick is based on the A Aeolian scale and focuses on the characteristic note (b6) of the Aeolian mode. By emphasizing this note, you outline the sound of the mode in your lines, differentiating it from other minor modes such as the Dorian mode, which has a major 6. 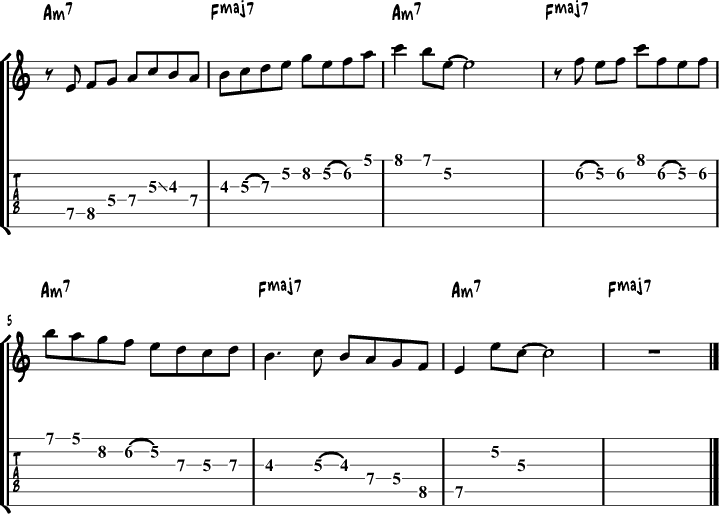 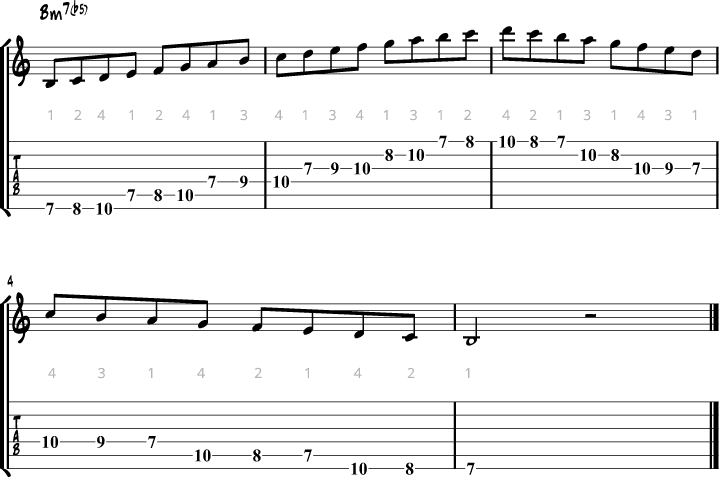 The following example only uses notes of the B Locrian scale. I emphasize the 11 in this lick because it adds a nice color played over m7b5 chords. 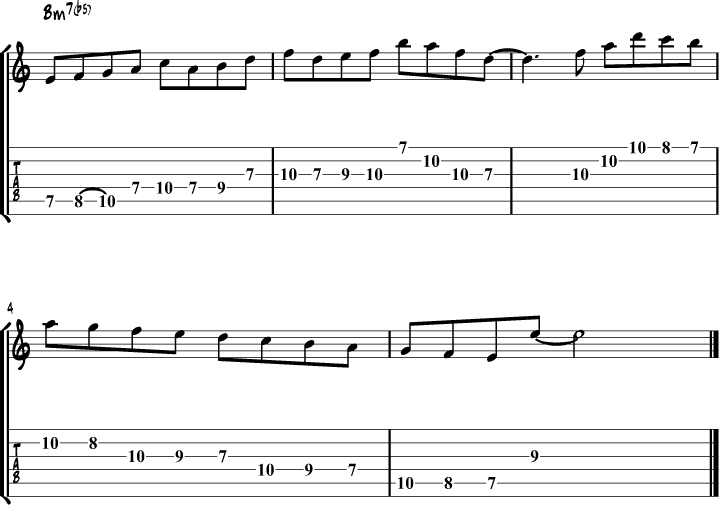 What is modal music?

A modal standard is a standard that uses modes instead of chord progressions as its harmonic basis.

The most famous modal compositions are So What (Miles Davis) and Impressions (John Coltrane).

Both standards use the same AABA form:

In bar 26, you’ll notice I switch to another position on the guitar neck. On that part, I play the A Aeolian scale shape, which might be confusing for those that just started studying modes. This is because a lot of guitarists think in shapes rather than in notes.

D Dorian has the same notes as A Aeolian (both come from the C major scale), they just start on a different note. Because the harmonic background of this tune is D minor, the A Aeolian shape will sound like D Dorian.

You can also play all the other mode shapes of the C major scale over So What (C Ionian, E Phrygian, etc). They will all sound like D Dorian because the tonal center of the tune is D.

The diagram below shows you a D Dorian scale that looks like the A Aeolian scale shape. Notice how the red root note is D, not A:

D Dorian = A Aeolian. Although it is ok to visualize scale shapes as you improvise, realize that they are just a set of 7 notes that depend on the tonal center of the tune you are playing. The A Aeolian shape played over D minor, will not sound Aeolian, but Dorian (confusing, I know). 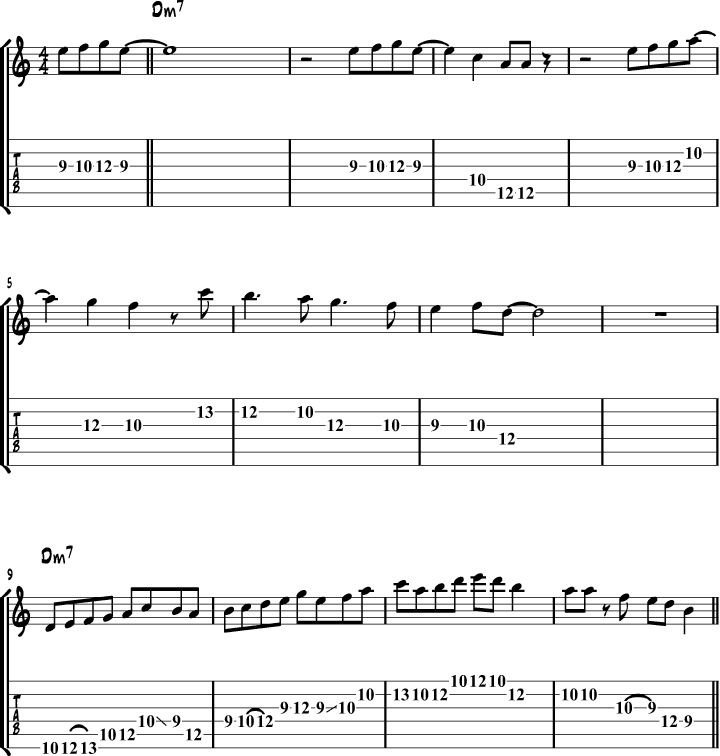 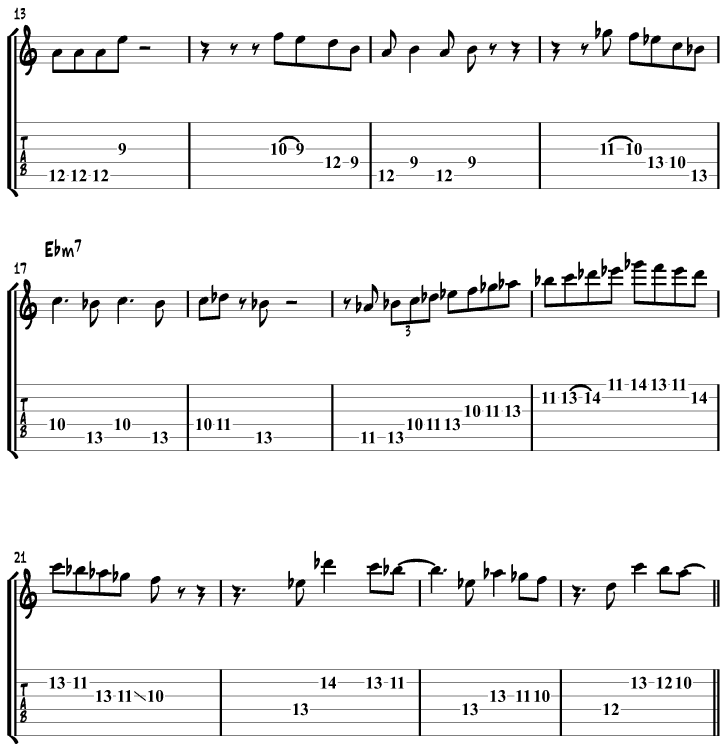 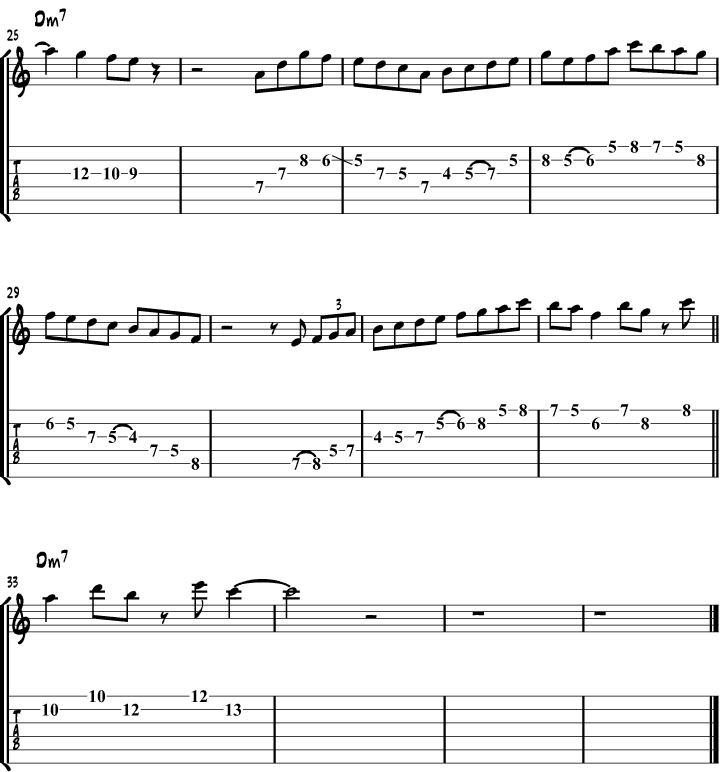 Next, you’ll learn how to apply modes over chord progressions, a ii V I vi (C major) in this case.

Theoretically, you play a different scale over each chord:

In practice we don’t think like that because it’s too hard to switch scales on each chord.

If we have a look at the 4 modes of these chords, you’ll notice they all have the same notes:

This means we can play one scale (the scale of the Imaj7 chord for example), and use that scale to play over all chords (as long as the chords don’t modulate).

In the following example I use the C Ionian scale over a ii V I vi chord progression: 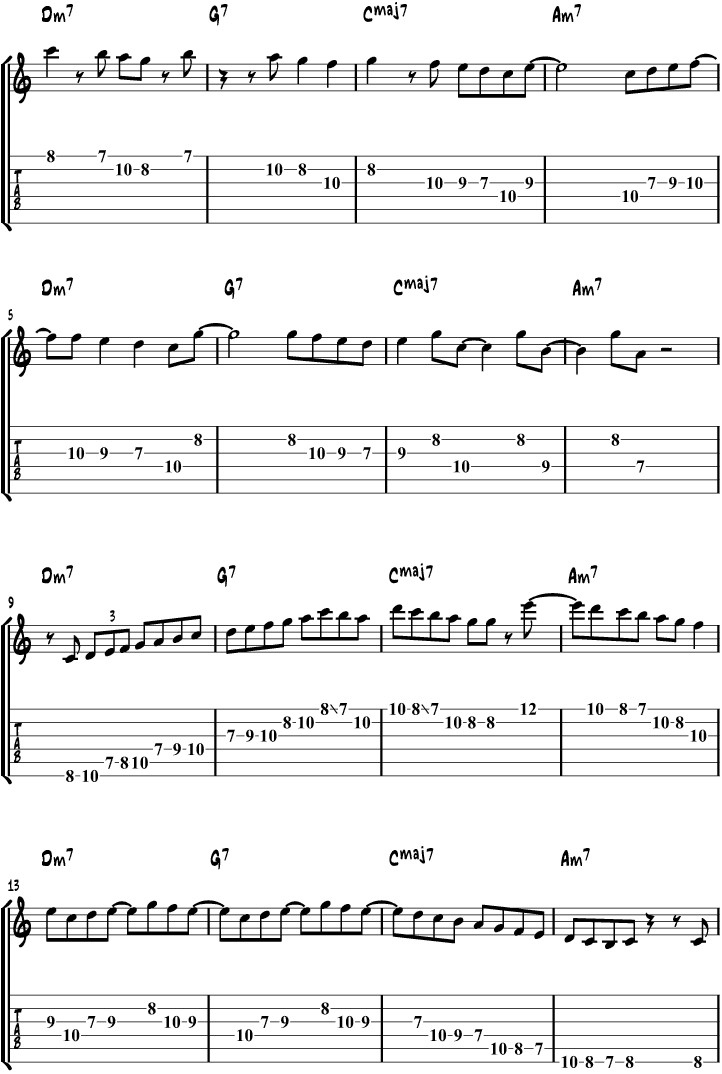 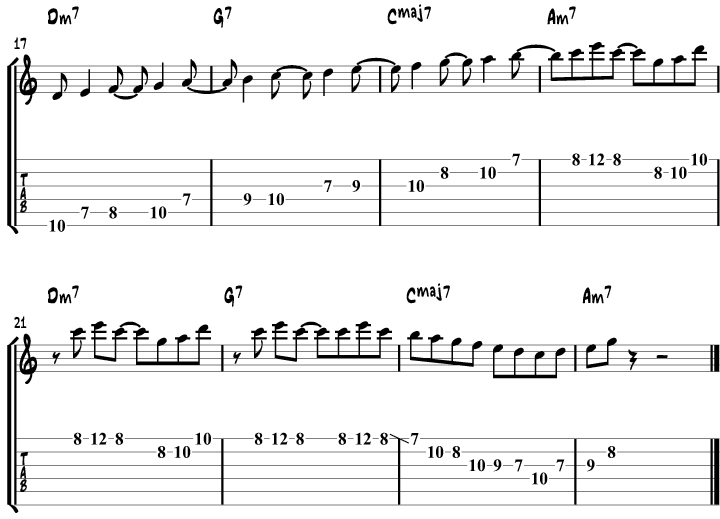 Here finishes our introduction to guitar modes. If you have any questions, don’t hesitate to post them in the comment section below.

What to learn after guitar modes? The best tool for improvisation are arpeggios.  Learn all about them in our Introduction to Guitar Arpeggios.