Learning jazz guitar scales can be complicated and often beginners wonder which scales they should learn first. The 7 scales on the chart below are a good place to start. These scales are essential for beginning jazz guitarists and enable you to play over almost any jazz standard.

This lesson is by no means meant to be complete but gives you a good overview of the most important jazz guitar scales. For each scale, there are 2 positions on the scale chart. These are the most important positions you should learn first. Once you master these two, make sure you learn all other positions as well.

Below the scale chart, you’ll find some more tips on how to practice scales, as well as understand how to use them.

How to Practice These Scales?

In the examples below, we’ll be using the C major scale.

First, you should be able to play the scales up and down, from the low string to the high string and back, without hesitation and without hiccups along the way. All notes should sound clean and even.

Here’s an example for the C major scale:

Another good starter exercise is to play each note of the scale double: 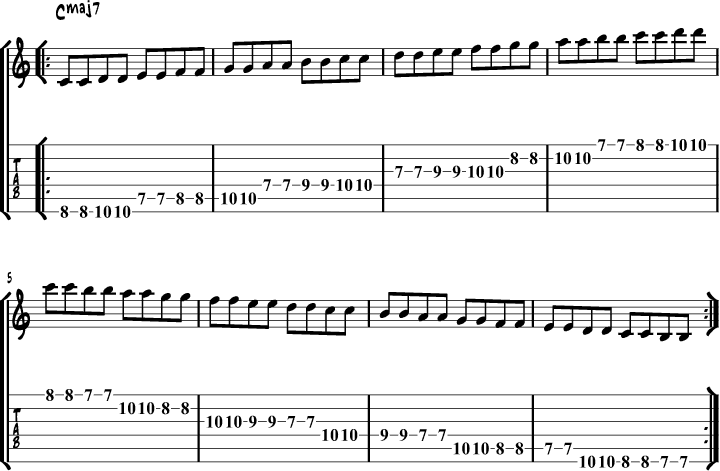 When you have the previous examples under your fingers, you’re ready to learn some scale patterns.

In this first pattern, you’ll play the C major scale in 3rds, by skipping a note: 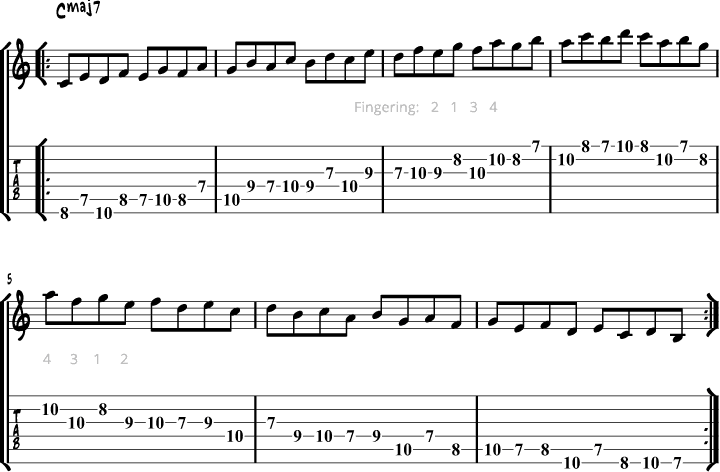 In this scale pattern, you’ll play the C major scale in groups of 3 notes: 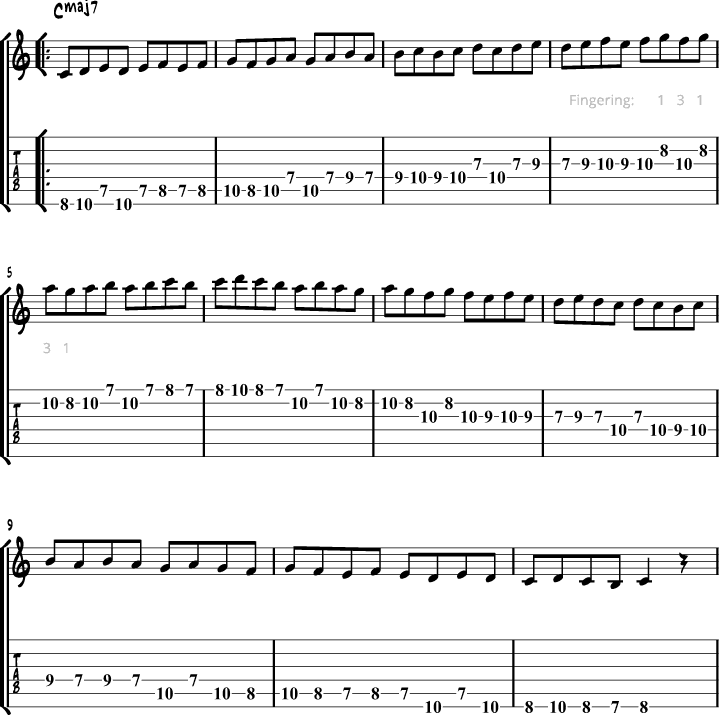 In this next scale pattern, you’ll play the C major scale in groups of 4 notes: 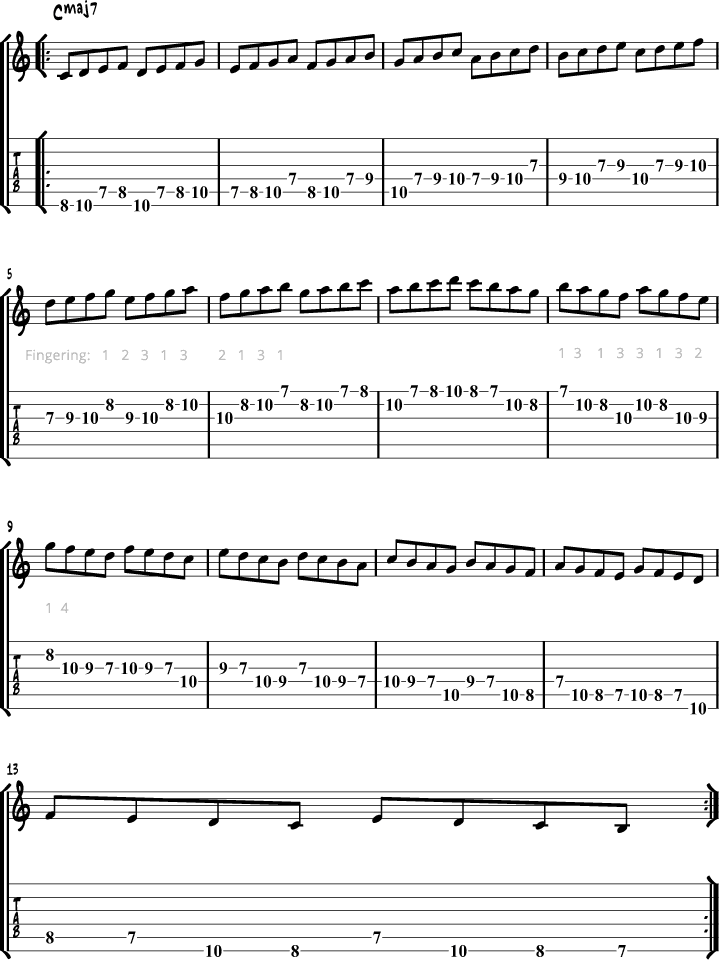 When we first start learning guitar scales, we usually play the scale vertically on the neck, from the lowest to the highest note in a particular position. This is a necessary step, but don’t limit yourself to that because it’s hard to see the connection between the different positions that way.

Playing horizontally is a more advanced method of playing guitar scales and means we start left on the guitar neck and advance to the right, or the other way round. This can be done on two adjacent strings or three or four or with a skipped string, the possibilities go as far as your imagination goes. I’ll help you on your way with some examples.

In this section, we work with the C major scale, but you can use any scale you like.

Playing a scale on 1 string is a good ear training exercise and a good preparation to play what you hear. In this exercise, you play the notes of the C major scale on 1 string. Don’t think about where you place your fingers too much, but work with your ears.

In this example, you start on the high E string and work your way down to the low E string. 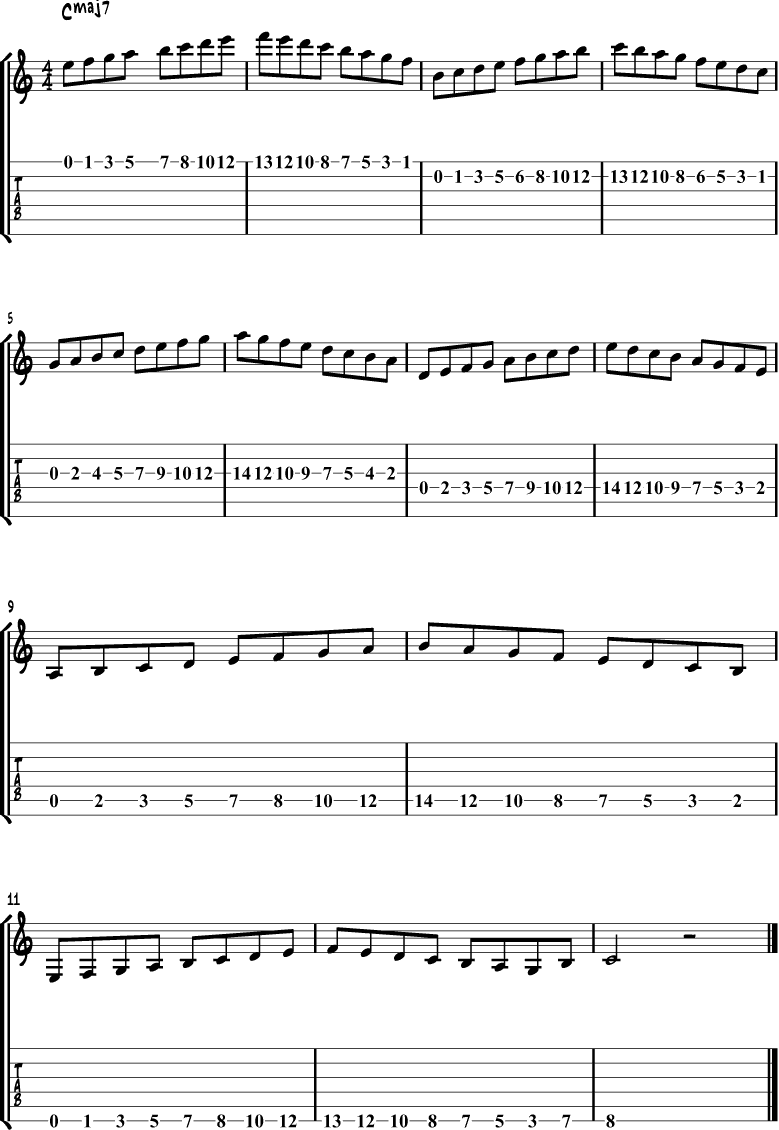 You can also play the notes of the C major scale on 2 adjacent strings.

In this first exercise, you will play on strings 1 and 2:

You can pick any string set you like, here’s another example on strings 4 and 5:

Instead of playing the scale melodically (note by note) you can also play it harmonically (2 notes together):

The Ionian, Dorian and Mixolydian Scale

There are 7 modes, but in this lesson we’ll only have a look at 4, to keep things simple:

Let’s say you want to play scales over a ii V I vi chord progression in C major:

Music theory tells us you should play the following scales over each chord:

The problem with this theoretical approach is that it’s not very convenient because you have to think about another scale on every chord.

The good news is that these 4 modes all have the same notes:

As you can see in the table above, these 4 modes all have the same 7 notes, namely the notes of the C major scale (C D E F G A B), they just start on a different note.

This means we can pick one scale (usually the scale of the Imaj7 chord), and use that scale to play over all chords that are within the key.

In the following audio example, I play the C Ionian scale up and down over a ii V I vi backing track, and you will notice all notes are in key:

Playing scales like this is good for initial practice, but it doesn’t sound very musical.

In the following example, I play the same scale over the backing track but in a more creative manner.

When using scales to improvise, your musicality will dictate how you play them:

Here’s a more musical example of how you can use the C Ionian scale over the same ii V I vi chord progression: 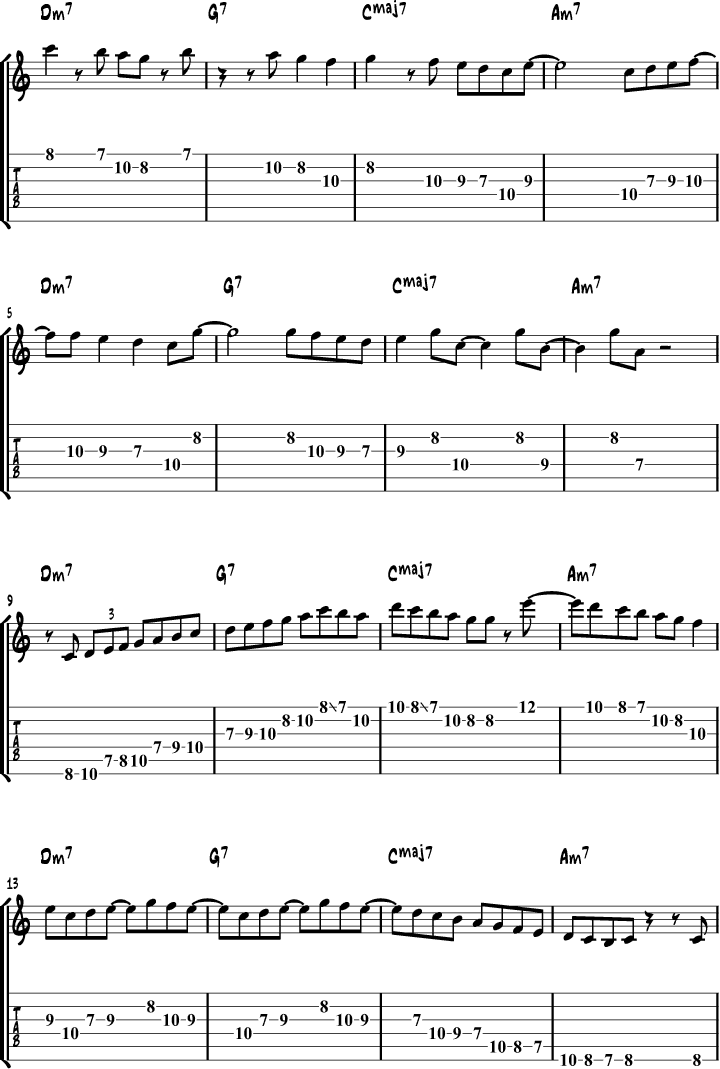 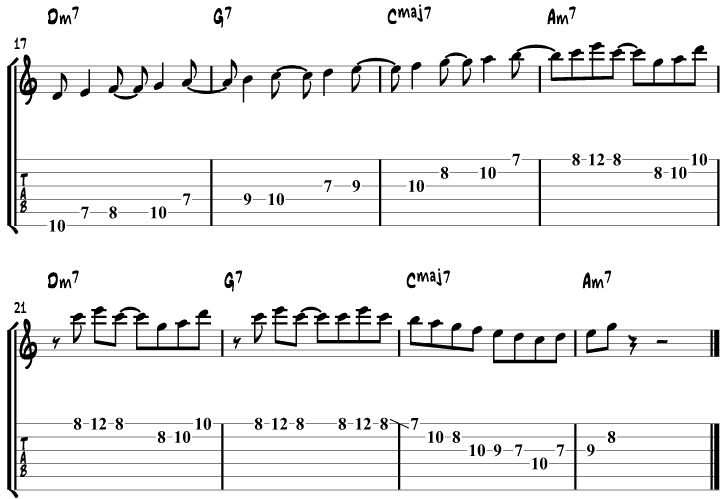 In this minor blues scale study, you will be using the minor blues, Dorian, Aeolian, and Phrygian dominant scales.

As you can see from the list above, the C minor blues scale works over the entire minor blues, but for the sake of variation, it’s a good idea to mix in other scales as well. 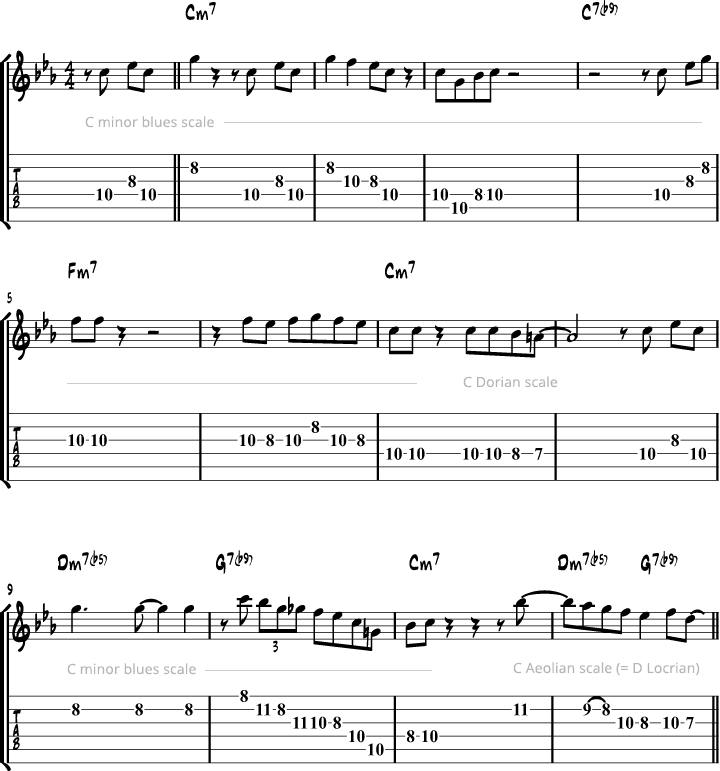 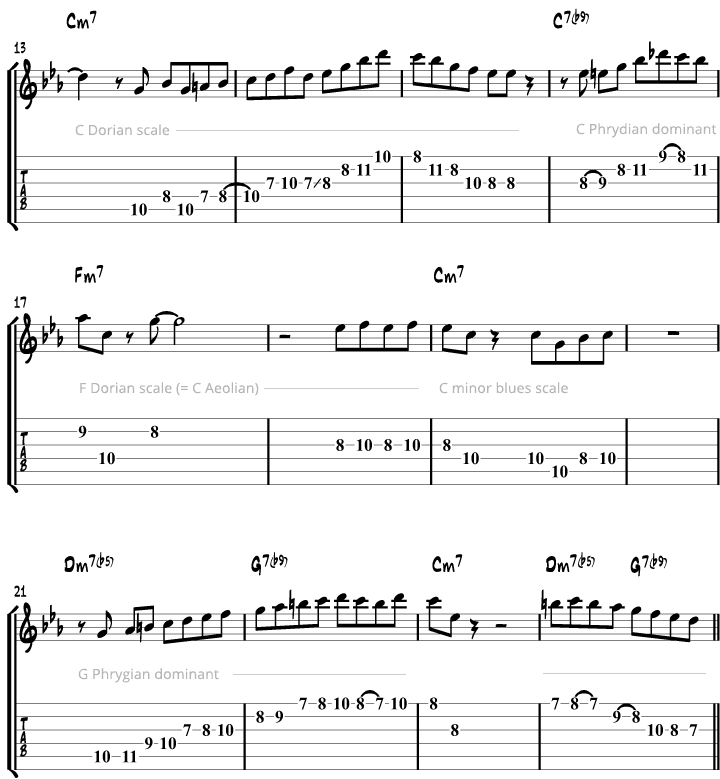 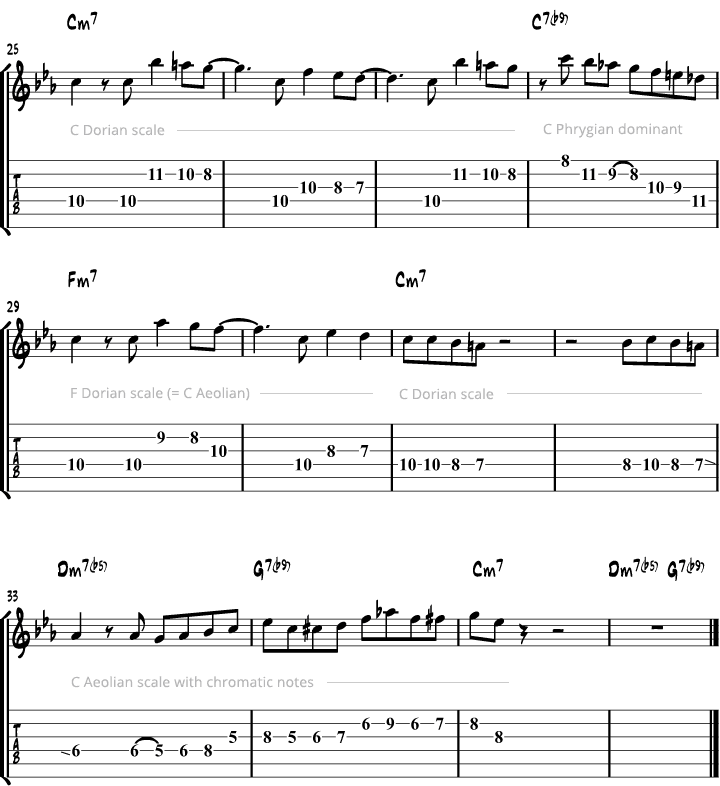 To learn more about the minor blues, and jazz blues in general, check out our Introduction to Jazz Blues Guitar Bundle.