Miles Davis’ professional career spans 50 years during which he was on top of almost every important innovation in jazz. Miles Davis impressed by his performance, recordings, and also by his choice of sidemen. Though not a guitarist, studying Miles Davis’ lines can take your jazz guitar soloing chops and creativity to the next level. 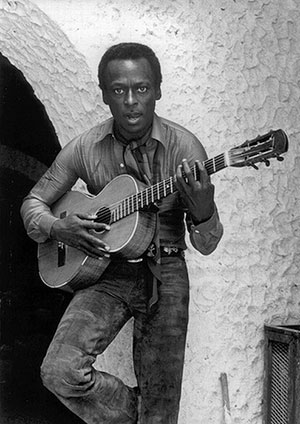 Getting picked to play in a Miles Davis band was like putting a dose of steroids in your musical career. The list of guitarists who played with him speaks for itself: John Scofield, Mike Stern, John McLaughlin, and Robben Ford.

Miles Davis – So What 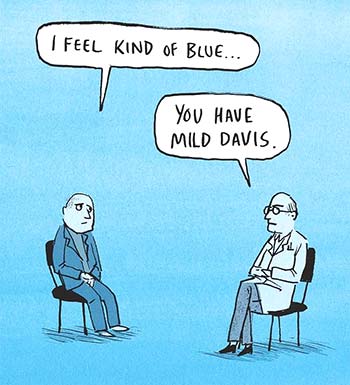 Here is the theme of So What, from the Miles Davis album Kind of Blue.

This first-take, unrehearsed Miles Davis session from 1959 is a true masterpiece. It was the key recording of what became modal jazz, a music free of fixed harmonies and forms.

If Kind of Blue is not part of your collection yet, don’t hesitate and get it, it’s the best-selling jazz album ever.

“The powerful thing with Kind of Blue is the space and information. There’s a lot of air in that record in the sense you don’t feel overloaded and you can take in each note. You don’t feel confronted with the music. You feel as if you’ve been invited into something very special.” -David Fricke

The band itself is extraordinary (proof of Miles Davis’s masterful casting skills), listing John Coltrane and Julian “Cannonball” Adderley on saxophones, Bill Evans on piano, and the crack rhythm unit of Paul Chambers on bass and Jimmy Cobb on drums.

So What is based on the D Dorian mode:

The composition itself alternates between D minor and Eb minor. The chords that are being used are quartal voicings, a harmonic device made famous by Miles’ piano player Bill Evans.

Miles Davis uses simple melodic phrases in his solo, all in the Bb major scale, except on the Gm6 in bar 7 and 15, where he switches to Bb Lydian (=G Dorian) and emphasizes the natural 6.

“Miles was the Picasso of jazz. He really knew how to use space just like a painter.” -Quincy Jones

Notice his use of voice leading (the guide tone notes are circled in blue): 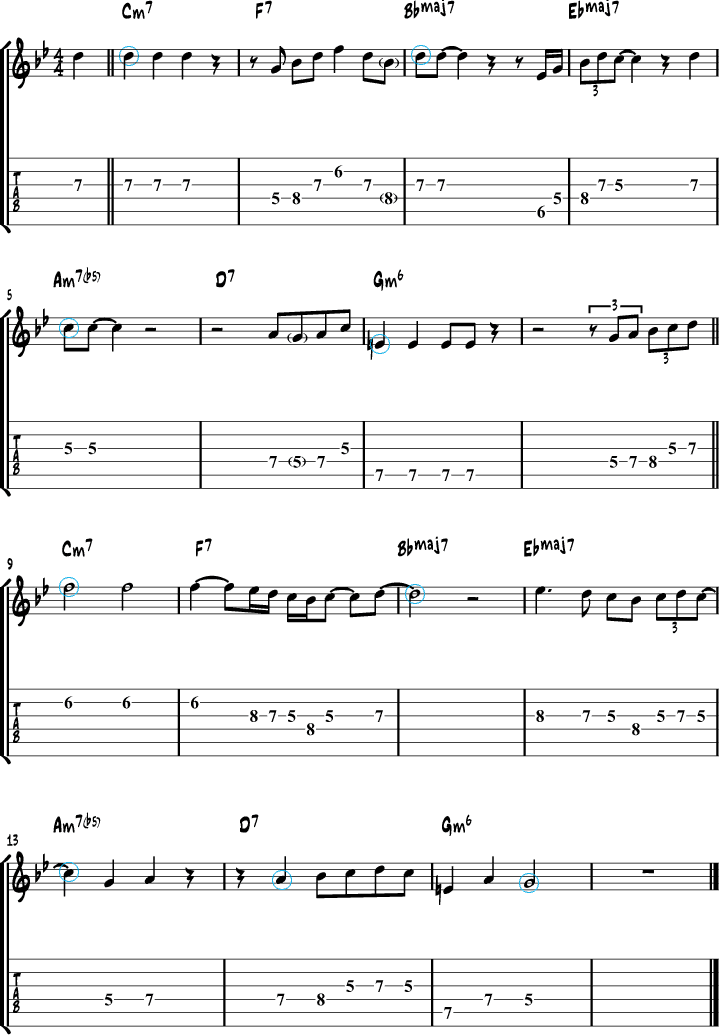 This ii V I lick in Bb uses typical Miles techniques as it snakes its way through the underlying chord changes.

Check out the voice leading techniques that Miles uses:

The next line has a typical shape that you hear in many of Miles’ improvised solos:

Here is a typical bebop lick that comes from Miles Davis’ solo on Move, the first song on Birth of the Cool.

The lick starts on D Dorian in the first bar, going to an Am phrase on G7, to a Dm phrase on Cmaj7, delaying the resolution.

This lick on a short II V in C minor comes from Miles’ solo on On Green Dolphin Street.

Notice the ghost notes in bar 2, producing some interesting phrasing which you can take out and use when practicing scales and arpeggios.

This lick on a series of II Vs going to Fmaj7 is from a Miles Davis solo on Boplicity. 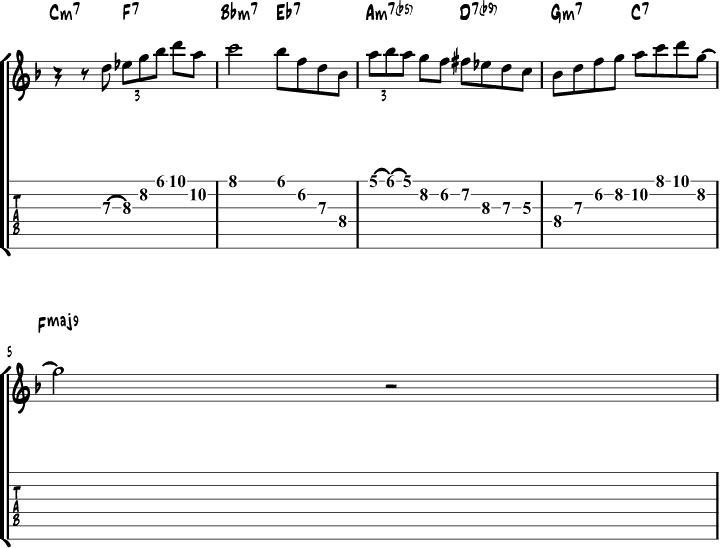 This lick over Ebmaj7 is from Miles’ solo on On Green Dolphin Street and revolves around an Ebmaj9 arpeggio: 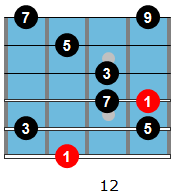 Here is a Dm7 lick that uses a few chromatic notes (the A# lower neighbor and C#), hinting at D melodic minor to build tension during the phrase.

Here are two approaches that Miles liked to use in his minor 7th chord soloing ideas:

In this Dm7 lick, you are only using the notes from the D Dorian Mode to create this snaking line over the underlying chord.

Notice the three 4-note groups in bar 2 and 3. These three groups are all classic Miles mini-licks that are worth exploring further:

This minor lick is from Miles’ solo on Milestones and is built around a Gm7 arpeggio: 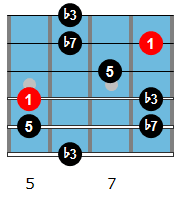 This simple, but effective lick is also from Milestones and uses the same Gm7 arpeggio.

All the backing tracks of the examples in this lesson are made with Band in a Box, intelligent accompaniment software for your computer. Thanks to Band in a Box, you can practice guitar with a virtual band, making your practice routines more fun and effective. Check it out here…

14 thoughts on “Miles Davis For Guitar”