Charlie Parker (aka “Bird”) is one of the founders of bebop. He was the master of chord tone improvisation and that’s why his playing is so interesting for guitarists to study. Though translating lines from sax to the guitar isn’t always easy, studying legendary players such as Charlie Parker is time well spent. Getting your fingers, ears, and mind around the improvisational mindset of such an important player in jazz history is essential in the development of any jazz improviser.

Even if you would leave the band out and listen to Parker playing solo, you can still hear every chord of the tune’s chord progression. Outlining the chords in your improvisations makes your improvised solos more interesting to listen to.

Studying Charlie Parker’s playing style is a great way to sharpen your chord tone soloing skills and getting a bebop sound.

The first bar starts with the opening phrase from Groovin High, a bebop standard written by Charlie Parker and Dizzy Gillespie.

The lick starts with a  Dm add 9 arpeggio over the Dm7 chord, a common choice in bebop.

The opening phrase of the next lick comes from the theme of Groovin High as well.

It’s a simple Dm7 arpeggio pattern, followed by an Abdim7 arpeggio over G7.

The diminished chord outlines the 3-5-b7-b9 of G7, giving it a bit of tension that is then resolved when the Ab moves to G in the line.

Playing a dim7 arpeggio from the b9 of a dominant 7th chord is a popular bebop concept, and is something you should explore further in your jazz guitar studies.

The next lick is over a ii V I in Eb major and features a bebop cliche in the second bar.

In that part, a Dm7b5 arpeggio is played over Bb7, a common substitution for dominant chords.

Charlie Parker Lick 4 – 3 to b9 Interval

This short 2-5-1 in C major has another bebop cliche, the interval-leap from 3 to b9 on beat 3, followed by a chromatic run to the 5 of Cmaj7.

Here’s a lick from the classic Bebop tune Donna Lee (it’s not clear who has written this standard, Miles Davis or Charlie Parker).

There are two items to pull away from this phrase, the first being the interval leaps in the first bar, followed by the b9-#9-b9 triplet motive in the second bar.

Both of these items are characteristic of Parker’s soloing material and can be studied outside of this lick so that you can apply both concepts to other tunes and progressions.

This minor 2-5-1 lick starts with a typical Charlie Parker rhythm, before it moves on to the C harmonic minor scale, a common choice in bebop to play over dominant chords.

The line ends with a delayed resolution because a G7 arpeggio is played over Cm7, which resolves on beat 3.

Charlie Parker Lick 7 – Minor ii V I in A Minor

The next lick, a 2-5-1 in A minor, uses the Gdim7 arpeggio over E7alt, as well as two trills (using F-G-F-E), which were characteristic of Parker’s playing style.

While working on Parker’s major key licks is essential, so is working on his minor phrases as there is a lot to be gained from studying this side of Bird’s improvisational output.

In bar 3 an Em7 arpeggio is used to create a Cmaj9 sound:

The lick ends on the b7, turning the Cmaj7 in a C7, something you would do in bar 4 of a Parker blues.

Notice the Cm7 arpeggio in bar 1. Using the ii or V over the I creates tension and movement, which makes playing over the same chord for several bars more interesting.

In bar 3 the Bb major bebop scale is used.

The second bar of this major lick is played around a Cmaj7 chord shape, which you can see in the grid below. 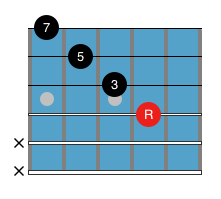 There is also a very common bebop phrase in the first bar (F-D-D#-E), where you start a half step above your target note, then run two chromatic notes below that target note, before resolving to the target note itself (in this case E).

This phrase works very well with the target note being the 3rd or 7th of the key, as both have diatonic notes a half step above them already, though with a bit of practice you can apply this concept anywhere you choose.

Jazz guitar patterns are small building blocks you can use in your solos.

Here are 4 major Charlie Parker patterns you can use over Cmaj7 or C7. The first one is from Au Privave, the second form Billie’s Bounce, and the third and fourth are from Moose the Mooche. 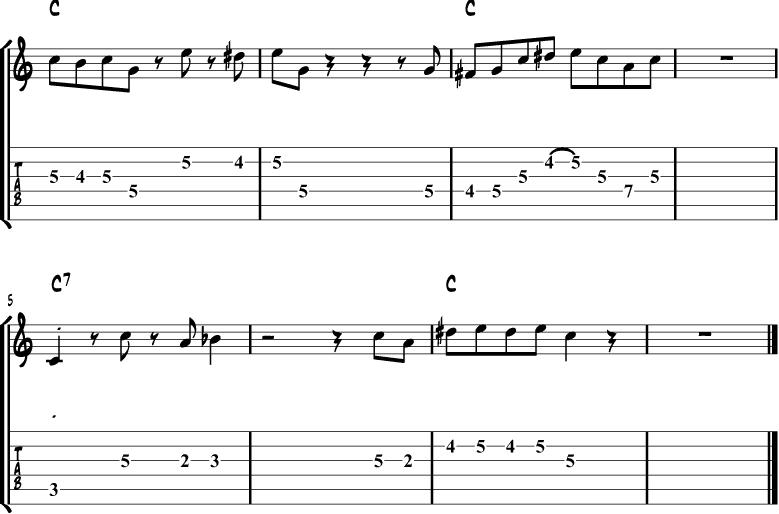 Here’s a lick over C7 that uses the C Mixolydian scale with chromatic approach notes.

Notice the typical Parker motive on beat 1 of bar 2, something that comes back often in his playing.

Another lick over C7. The same rhythmic motif we saw in previous licks comes back on beat 4 of bar 1.

Also, notice that the b7 is not played until the very end.

This is the opening lick of the bride of Anthropology, another bebop standard written by Charlie ‘Bird’ Parker and John ‘Dizzy’ Gillespie.

You can see the chromatic movement from the 3rd (F#) up to the 5th (A), which was a common Bird phrase and one many jazz players use to bring a chromatic/bluesy sound to their lines.