One of the first things you’ll notice when playing jazz guitar chords, is that there are a lot of variations for each chord type to get under your fingers. When playing over major family chords, for example, you can play C6, Cmaj7, Cmaj9, C6/9, etc., and they all have a similar function but sound different on the guitar. To help you become more confident with major family chords, this lesson will delve into 6 chords on the guitar.

6 chords are used to bring a soft sound to your major-based chords, and are used in place of maj7 chords when comping over a jazz standard.

In the material below, you’ll learn how to build 6 chords, how to apply them to a jazz situation, how they relate to relative minor chords, and study four examples of these chords in action over chord progressions.

6 chords are from the major family of chords, and are built with the interval pattern 1-3-5-6:

They can be written as C6, Cmaj6, or CM6, depending on the style of leadsheet you’re playing.

One thing to notice when writing and reading these chords, is that they’re not called or written as maj13th chords.

Though the 6th and 13th are the same interval, just one octave apart, the term 13th is used for dominant chords, and 6 is used for major family chords to help differentiate them on a leadsheet.

Here’s an example of a C6 chord from both an interval and note perspective to check out on the fretboard, and to play through to hear how C6 chords sound on the guitar.

As you become more familiar with 6 chords, you’ll realize that they share the same notes as the relative minor chord in the key you’re playing in.

Here’s an example of this relationship between and Am7 and C6 chord. Notice that Am7 and C6 share the same notes:

Here are those two chords on the guitar. Play through each shape to hear that they share the same notes, but have a unique sound, one minor and one major.

This can be helpful when playing 6 chords on guitar, as if you know m7 chord shapes, you can use those same shapes over any 6 chord.

When doing so, you just play a m7 chord from the 6 of any 6 chord you’re on, Am7 over C6 for example, and they’ll share the same notes.

To help you get started with taking 6 chords to the fretboard, here are four common C6 chord shapes on different string sets to practice.

After you can play any of these shapes for a C6 chord, take them to other keys around the fretboard. As well, practice applying them to any tune you’re working on.

Refer to the next section of the lesson to find out where to apply 6 chords to your jazz guitar playing. 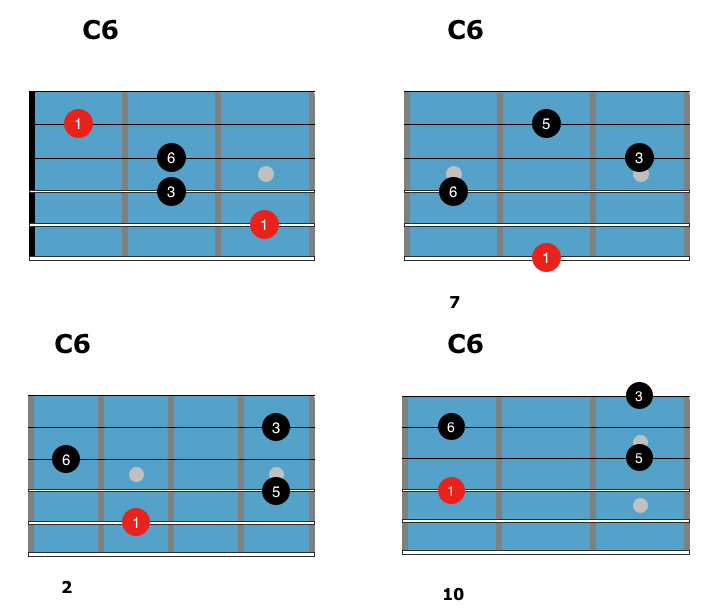 How to Use 6 Chords in Jazz

6 chords are used in place of maj7 chords in jazz.

Whether you’re comping, playing a chord melody, or playing solo jazz guitar, you can replace most maj7 chords with a 6-chord shape.

Because both chords, 6 and maj7, are found in the major-family of chords, both being built from the major scale, they can be used interchangeably in your playing.

Here’s an example that uses a G6 chord in place of a Gmaj7 chord in the fourth bar of a ii V I in G major.

Notice the softer sound that the G6 chord produces as compared to Gmaj7.

Knowing the difference in sound between these two chords will help you know where and when you want to use either in your playing.

The only place you would really want to avoid using a 6 chord is when you have the major 7th note in the melody line. In that case, a maj7 shape would be more appropriate as it’s more closely related to the melody line.

Use your ears as a guide when bringing 6 chords into your playing. You can use them in place of maj7 chords, but only when they sound good. So let your ears tell you if it’s a good time to use 6 chords or maj7 chords.

To help you take 6 chords into your playing, here are three chord progressions that use 6 chords in their construction.

Because you’ve already done a long 2 5 1 chord progression, here’s a short 2 5 1 in the key of C Major that you can work out.

The next chord progression is the first four bars of a Bb Rhythm Changes progression.

Here, you’ll be using 6 chords over both Bbmaj7 changes in the progression.

Notice the inversion being used in the 3rd bar (Bb6/D). If you’re new to inversions, this is a Bb6 chord with the note D (the 3rd) as the bass note. Inversions are a great way to create smooth movement in your basslines, especially in an ascending-descending progression such as this bass line.

The final 6 chord progression is the first 8 bars to the Girl From Ipanema.

6 chords are very commonly used in Brazilian jazz guitar, especially Bossa Nova. 6 chords have a softer quality to them as compared to maj7 chords, which suits the laid-back Bossa style perfectly.

17 thoughts on “How to Play 6 Chords on Guitar”