Drop 2 chords are the most popular chord voicings in jazz guitar, and serve a wide variety of purposes, including comping, soloing, and chord melody. They have been used by many of the great jazz guitarists including Joe Pass and Wes Montgomery. By understanding how drop 2 chords are built you can quickly learn to play them over the entire neck, and begin to use them to comp or solo over your favorite tunes.

Chances are you are already using drop 2 chords in your guitar playing.

Having a good understanding of drop 2 voicings can be a valuable tool for players of any experience level when comping or improvising a chord solo.

Drop 2 chords are seventh chords that are built by dropping the second highest note of a closed position chord down one octave, making that note the bass note of the chord.

Drop 2 chords are open position chords and are important for guitar players because these chords are easy to play on 4 adjacent strings.

In the following example, we start from a Cmaj7 chord in closed position.

The second-highest note is the 5th (G), that is dropped down one octave to create a drop 2 voicing.

The result is a Cmaj7/G (C major seventh with G in the bass). The 7th is moved to the B-string, in order to put the voicing on 4 adjacent strings: 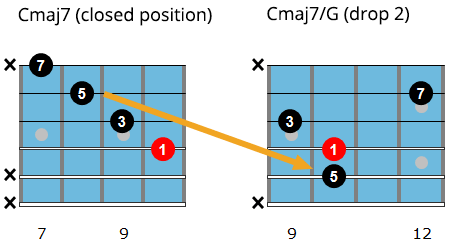 On the following chord chart, you will find major, dominant, minor, half-diminished, and diminished drop 2 chords and their inversions.

How to Build Drop 2 Chords

Drop 2 chords are built by dropping the second highest note of a four-way close chord to the bass.

In the following example, we make the second highest note (G) of a Cmaj7 chord in root position, one octave lower so it becomes the bass note.

The result is what we call a drop 2 chord: 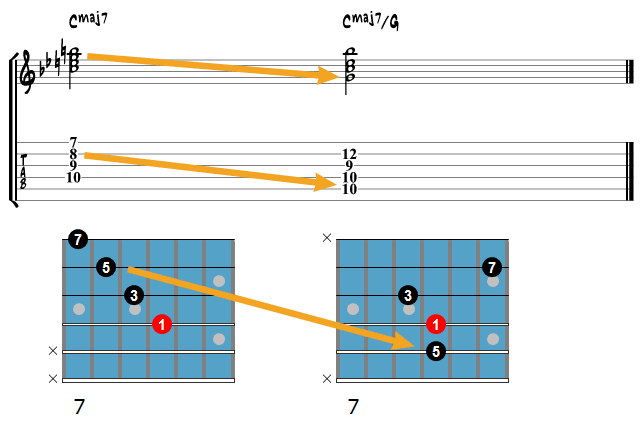 This intervallic arrangement helps give the drop 2 its signature sound.

Fig. 1 shows these four inversions written out in the key of C across the three different string groups:

How to Build Common Drop 2 Voicings

Once we have learned to play the different inversions of major seven drop 2 chords across the three string sets, we can begin to check out the other “common” drop 2 chord types.

Learning these different chords can seem like a daunting task, but with a few simple steps, we can play all of these chords with relative ease.

Instead of treating each of these different chords as separate fingerings, we can look at them as variations of the Maj7 chord we already know.

Start by holding the root position CMaj7 chord that we learned in Fig. 1.

Now, by moving only one finger we will turn it into four different types of chords:

Here’s a good exercise that will help you memorize the drop 2 voicings.

Play the drop 2 chords over a ii V I in C major.

Start with the Dm7 voicing in root position on the 12th fret and descend down the neck, while making as little change possible between chord changes.

The exercise sounds a bit mechanical played like this, but is effective for learning the positions of drop 2 chords on the fretboard.

Drop 2 chords are often used for harmonizing melodies and chord solos. In the example below, the G major scale (the top note of the chords) is harmonized.

2 things you need to keep in mind when harmonizing melodies:

You can use these drop 2 scales to harmonize melodies, do chord solos, but also bring variation in your chord accompaniment.

Here’s an example on a ii V I in G major. All chords used are drop 2 chords, except the Gmaj7 in the third bar, that’s a 4-way close voicing.

To make the D7 chord in the 2nd bar a little more interesting, I made some modifications to the plain drop 2 chord.

Instead of just playing the normal D7/C drop 2 inversion, I exchanged D7’s 5th on the second string with the 13th: 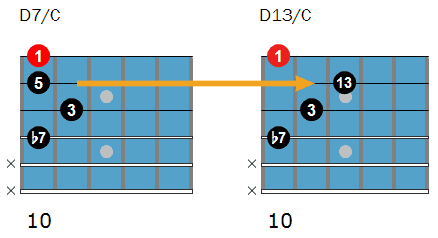 In the next voicing I exchanged D7’s root note with the 9th: 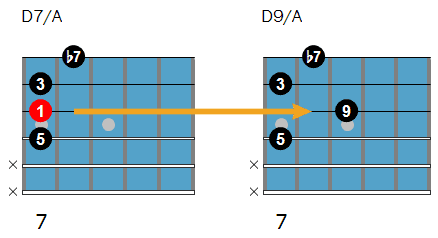