If you’re a jazz guitarist, you’ve spent time working out chord shapes on the guitar but have hit a roadblock or two along the way. You’ve learned dozens of cool-sounding grips, but when it comes time to apply these shapes to a tune, things fall apart.

Learning how to play chords and how to comp over your favorite jazz standard requires different skills and a different approach to practicing.

To help you expand your playing from memorizing shapes to comping with confidence over jazz tunes, here are 5 essential jazz chord exercises for guitar. Each of these exercises will take your chord playing to the next level, expanding your confidence and chord vocabulary at the same time.

So, grab your guitar, turn on your amp, and get ready to push yourself to new levels of excitement and engagement in your jazz guitar comping phrases.

Here’s the order of chord qualities that occurs when you begin on maj7 and work your way down to dim7 chords on the fretboard.

To help you visualize this movement, altering one note at a time to produce the next chord, here’s a handy chart.

Now that you know how to change one note to produce the next chord in the sequence, you can apply this concept to the fretboard.

Beginning with drop 3 chords on the 6432 string set, here’s an example in the key of C that you can practice in your jazz chord studies.

The note in blue is the one that is moving between each chord shape. 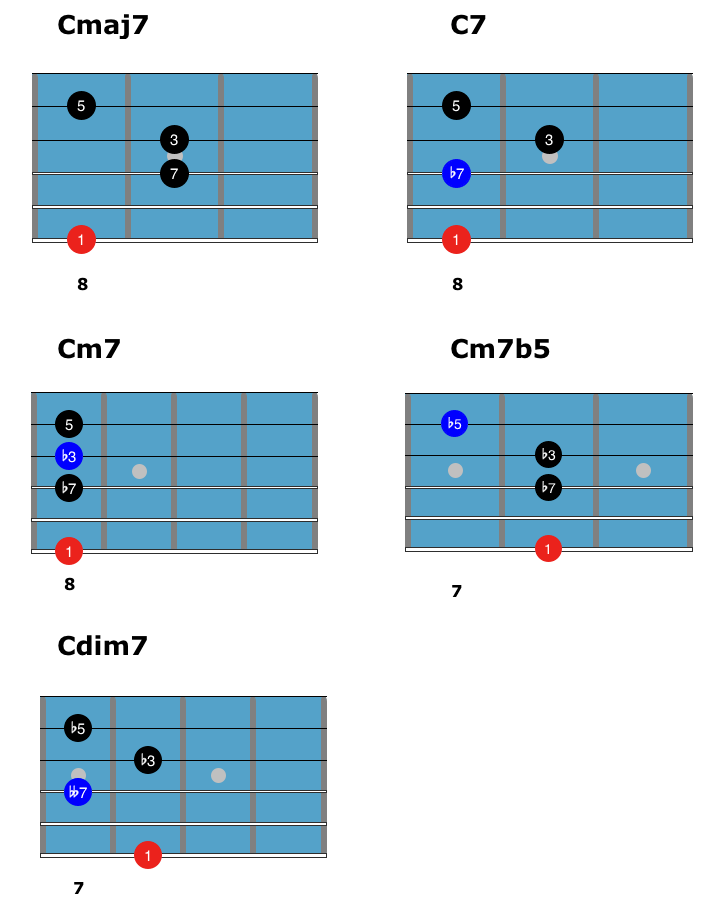 As well as work on chord qualities in root position, you can apply this jazz chord exercise to inversions as well.

Here’s an example of drop 2 chords in second inversion on the top 4 strings to explore in your jazz practice routine. 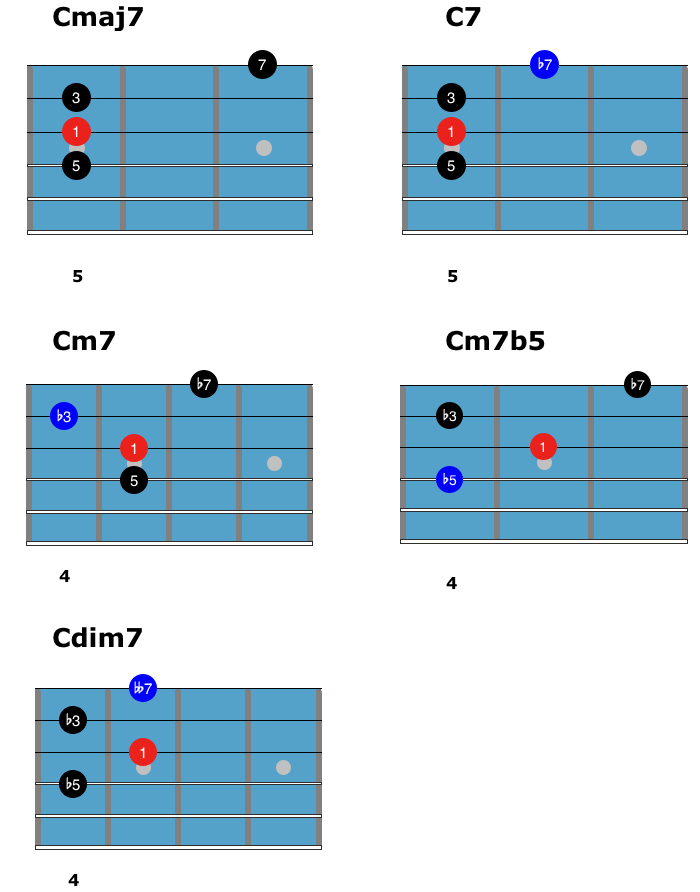 After you’ve worked out these examples, move them both to other keys, as well as apply this exercise to other inversions, chord types, and string sets in your studies.

Speaking of inversions, working chord inversions across the fretboard is an effective way to learn chord shapes in any area of the guitar.

As well, inversions feature different intervals on top of each chord shape, which will come in handy when working on chord melody arrangements on guitar.

This exercise is fairly simple on paper but can be difficult to visualize and execute on the fretboard.

Here are the steps for this jazz chord exercise that you can follow in your studies:

From there you can apply this exercise to any key, chord type, chord quality, and string set. 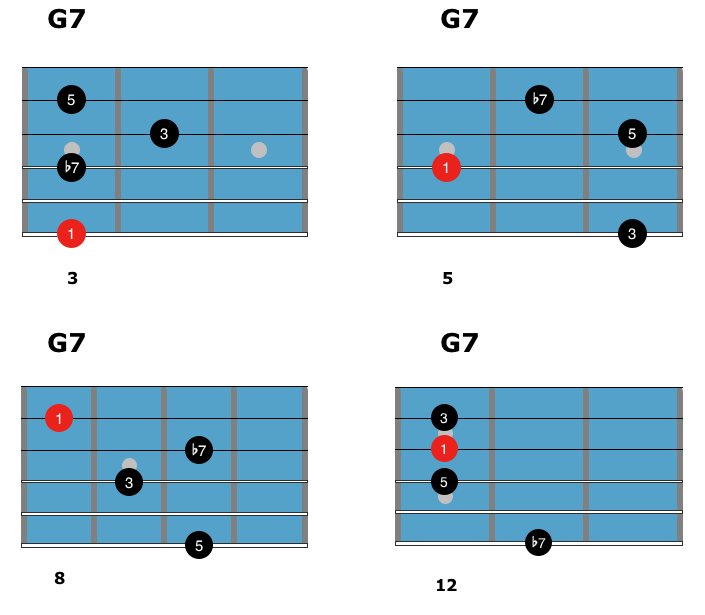 For a bit of variety, here’s a Cm7 drop 2 chord taken through its various inversions on the top-4 strings.

Notice that you begin higher up the fretboard with the Cm7 shapes, and then jump down once you get too high on the fretboard to continue with your inversions. 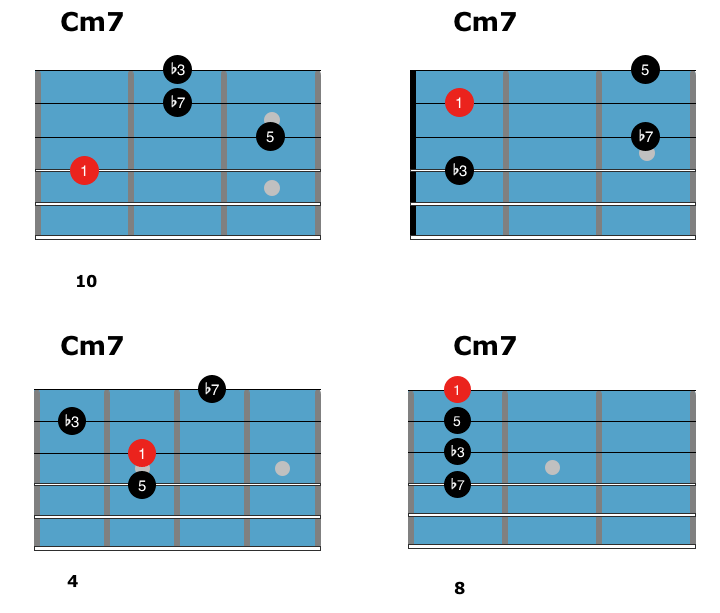 After you’ve explored these two examples, take them both to other keys on those string sets, before moving to other chord types, qualities, and string sets.

Moving forward, you can now begin to work chord progressions in inversions, starting with the most popular jazz progression of all, the ii V I.

When working this exercise, you start with the ii chord, move to the closest inversion of the V chord, and then the closest I chord from there.

Here’s an example of this exercise using drop 2 chords in the key of F major.

As well as working this exercise from a root-position ii chord, you can start on any inversion of the ii chord and move to the closest V and I shapes from there.

Here’s an example of that using drop 3 chords, with the iim7 chord being in first inversion and the rest moving to the closest shape from that point.

Working on ii V I changes means working in major and minor keys, and so you can apply this jazz chord exercise to minor ii V I progressions in your studies as well as major.

Here’s an example of a ii V I in the key of A minor, with the closest inversions being used for each chord after the iim7b5 chord gets things moving.

As was the case in the major progression, you can apply this concept to a iim7b5 inversion, moving to the closest inversion from that starting chord in your playing.

Here’s an example of that approach using drop 2 chords on the top-4 strings, with the iim7b5 being a 3rd inversion and moving to the closest shape from there.

After you’ve worked out these examples, you can apply this exercise to other chord types, inversions, and string sets in your studies.

Another effective jazz chord exercise is chord scales, where you play a series of shapes through a key on the fretboard.

Here are the steps for building this exercise in your studies.

Sounds pretty simple on paper, but it can be tricky to execute, especially if you’re just getting into finding chords in any given key.

Here’s that same example on the fretboard to help you visualize this exercise on the guitar.

As well as working chord scales in root position, you can use any inversion you’re working on with this exercise in your studies.

Here’s an example of a chord scale built with drop 2 chords on the middle four strings in the key of E, using the 2nd inversion for each chord.

As you can see, chord scales allow you to play around the entire fretboard, without simply running inversions of chords in your playing.

When you’ve got these two written examples under your fingers in the given key, take them to other keys before moving on to other shapes and string sets.

If you find it challenging to work chord scales on the spot in your playing, you can write out any chord scale your studying on paper.

Then, after you’ve worked it out, you can memorize that chord scale on the fretboard as you take the exercise further in your studies.

When doing so, you have two options:

To get you started with this second approach, the more complex of the two on paper, here’s a chord study over the tune Bluesette.

You can learn the study as written, then begin to alter the rhythms, picking-hand attacks, and the chords themselves as you begin to personalize the study.

Once you have it down and can bring your personality to the study, write out a jazz guitar chord study of your own.

You can use this tune as a vehicle for that study, or you can pick any jazz standard you’re working on and use that in your practice routine.