In this lesson, you’ll be looking at a simple way to think about the tritone substitution, as well as explore a few examples of how you can apply this cool concept to your jazz guitar comping and solos.

What is a Tritone Interval?

One of the first theory terms you hear, and one that comes up time and again when studying jazz guitar, is the tritone.

In classical music, the tritone is known as diabolus in musica (the Devil in music) or the devil’s interval.

There are different applications of the tritone, including guide tones and tritone subs, but before you dive into those concepts, you need to know exactly what a tritone is.

In this section, you learn what a tritone is, how it sounds, and how to apply it on the guitar.

A tritone is the interval between a root note and 3 tones above or below that note.

If you want to know what a tritone sounds like, it’s the opening notes to the Simpsons theme song. “The Simps” is a tritone, then it resolves to the perfect 5th on “ons”.

For example (see tabs below):

The last bar in the example below shows you how to play a tritone interval without stretching your fingers beyond 1 fret on the low 2 strings.

Try playing the last two notes in this example and sing “The Simps”, then play the 3rd fret C on the 5th string and sing “ons”. You’ll hear it right away.

Now that you know what a tritone is, let’s look at how we use it in your jazz guitar playing, specifically over dominant 7 chords.

If you look at any dominant 7 chord, you find a tritone interval built into that chord shape, between the 3 and b7 of the chord.

Here’s how that looks on the fretboard for a D7 chord:

Below you’ll see the D7 example in tabs.

The first two bars are a D7 chord solid and broken so you can see the full shape.

The last two bars are the same shapes with the root and 5th removed, leaving only the 3 and b7.

The 3 and 7 of any chord are called guide tones because even if you only play those two notes of a chord you can hear the chord progression.

These two notes “guide” you through the changes:

Play these shapes on the guitar to get a feel for how they sit on the fretboard and how they sound.

With the knowledge of how tritones create the 3rd and 7th intervals of any dominant 7 chord, you can now take that to the fretboard.

Here’s the tritone (3 and b7) for D7 in four positions on the guitar. Play each one to hear how they sound and get an idea for how to finger tritone intervals on the fretboard.

After you play through these 3rds and 7ths, move on to the next section where you apply those shapes to a 12-bar blues in D progression.

Now that you know what a tritone is and how it fits into dominant 7 chords, you can take that knowledge to a playing situation.

Here’s a 12-bar chord study over a blues in D that uses only the 3rd and 7th of each chord.

For each dominant 7 chord, the interval between the 3 and b7 is a tritone interval. For Em7 that rule doesn’t apply, though the 3rd and 7th still sound good over that chord.

Work out this comping study, and then when you have it down add this concept to your comping over other blues and standard chord progressions.

Listen and Play Along 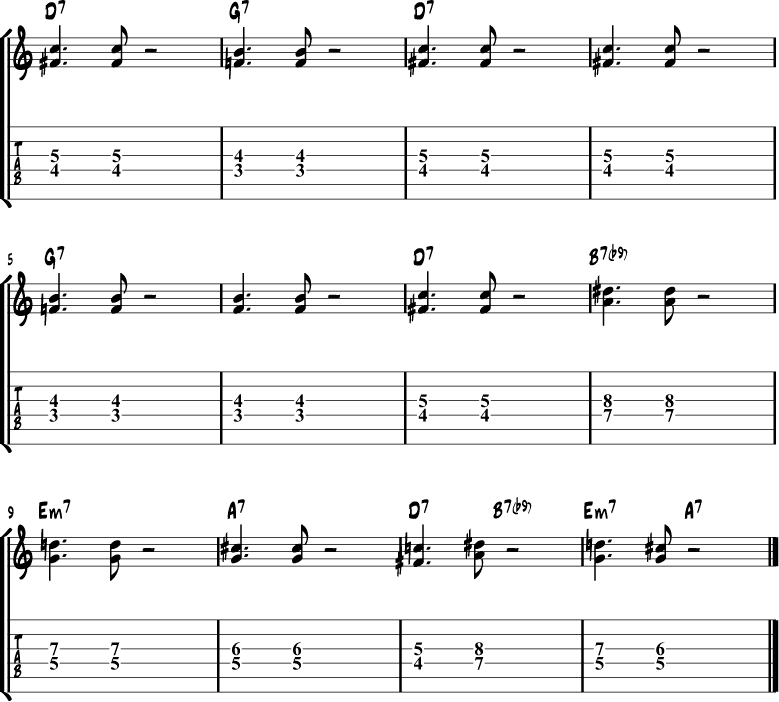 You can also use tritone intervals in your single-notes solos, both to outline the 3rd and 7th of any chord, as well as the transitions between chord changes.

Here’s an example of a solo that focuses on both approaches. You see the 3 and b7 (a tritone) played over specific dominant  7 chords.

You also see the 3 of one chord move by half step to the b7 of the next chord, creating a smooth movement between chords along the way. This is called voice leading.

Work on this solo in your studies. Then when you’re ready, add this concept of 3rds and 7ths to your own solos over blues and other progressions. 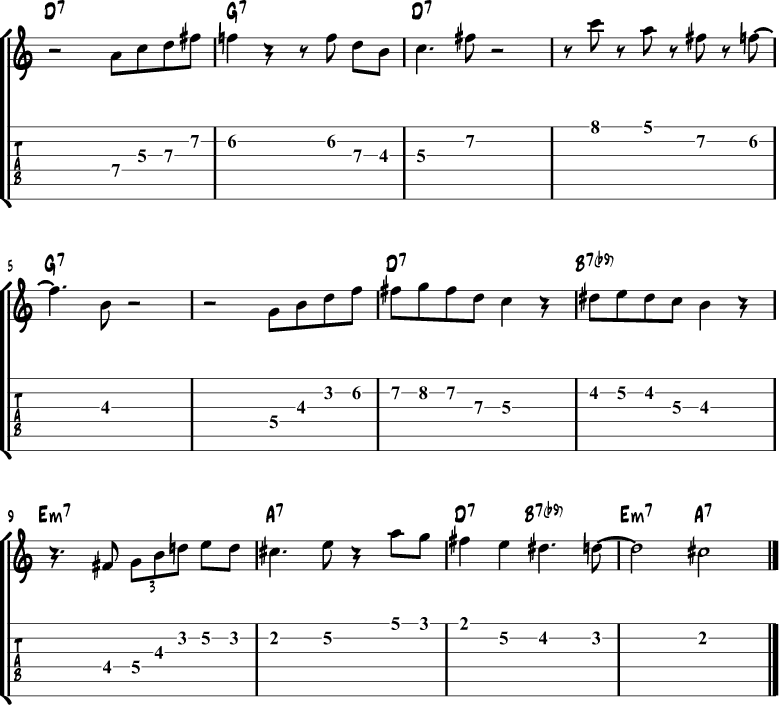 In this lesson, you will learn why tritone subs function as they do and how to apply them to various chord progressions.

What is Tritone Substitution?

To begin, let’s look into what a tritone sub is and how you can apply it to any dominant 7 chord you are comping over.

For example:  playing Db7 over G7.

The reason that this substitution works is that dominant 7 chords with a bass note a tritone apart share the same 3rd and 7th.

Here are the notes of those two chords for comparison:

As you can see:

This is the glue that holds the two tritone sub chords together.

Now that you know how tritone subs function and how to apply them to dominant 7th chords, let’s take a look at some common applications.

The first practical application of tritone substitutions we will look at is in the fourth bar of a jazz blues chord progression.

When playing on a common blues progression, you normally play I7-IV7-I7-I7 in the first four bars of the tune.

You can apply a tritone substitution in bar four.

In the key of F, this is a B7 chord, which resolves down by a half step to the IV7 chord (Bb7 in this key) in bar five.

Here is how that substitution sounds over a jazz blues chord progression in F. 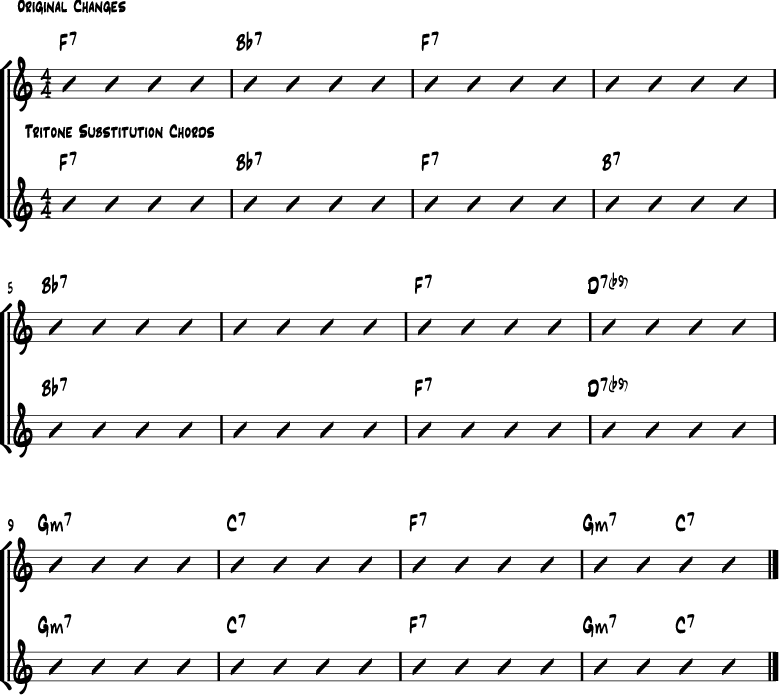 To help you get started with this tritone blues substitution, here is an example of how you can play through this pattern. 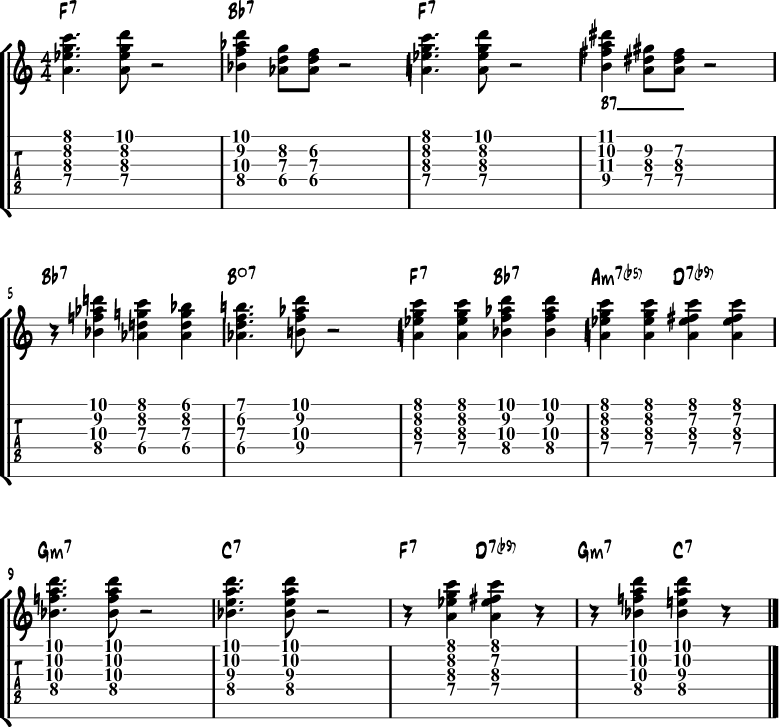 Probably the most popular choice for a tritone substitution is over the V7 chord in a major key ii-V-I progression.

When replacing the V7 chord of a ii-V-I with a tritone sub, you are creating the chord progression ii-bII-I

Have a look at the chord progression below for a basic example:

To help you get started with this tritone ii-V-I progression, here is an example of how you can play through this pattern in the key of C major.

Once you have these examples under your fingers, try applying them to tunes which contain a number of ii-V-I progressions, such as Tune Up or All The Things You Are.

Another popular progression that you can use to practice and apply tritone substitutions is the turnaround, which usually occurs at the end of a tune or section.

The standard major key turnaround uses the chords I-VI-ii-V, as you can see in the top changes of the example below.

The first place to apply a tritone sub is the V7 chord, as you can see in the chord changes in the lower staff.

When replacing the V7 chord with a tritone sub, you are creating the chord progression I-VI-ii-bII.

To help you get started with this tritone turnaround, here is an example of how you can play through this pattern in the key of C major.

You can also apply a tritone sub to the VI chord in a turnaround, which you can see in the following progression.

When replacing the VI7 chord with a tritone sub, you create the chord progression I-bIII-ii-V.

To help you get started with this tritone turnaround, here is an example of how you can play through this pattern in the key of C major.

Lastly, you can apply a tritone sub to both the VI and V chords in a turnaround to produce the chord progression I-bIII-ii-bII, which you can see and hear in the next example.

To help you get started with this combined tritone turnaround, here is an example of how you can play through this pattern in the key of C major.

Learning how to confidently apply tritone subs to your jazz guitar comping phrases is an essential tool for any jazz guitarist to have. Working on it in your daily routine until you can apply it smoothly will help take your comping to the next level of creativity.

How to Improvise over Tritone Substitutions

The scale of choice to solo over tritone substitutions is the Lydian dominant scale.

Here’s how the Lydian dominant scale looks on the guitar fretboard:

The first lick starts with the D minor bebop scale and goes to the Db Lydian dominant scale in bar 2.

The second lick starts with a Dm7 arpeggio, goes into the Db Lydian dominant scale in bar 2, and finishes on the 9 of Cmaj7 in bar 3.

Another scale you can play over tritone substitutions is the major pentatonic scale or the major blues scale.

Besides scales, you can also use arpeggios to play over tritone substitutions.

The F half-diminished arpeggio over Db7 results in a 9-sound:

Learning how to bring a modern jazz guitar sound into your improvised lines, in the style of great players such as Adam Rogers, Kurt Rosenwinkel, Ben Monder and John McLaughlin, can be tough.

But, with the right focus, and breaking ideas down into digestible chunks, you can learn to bring a sense of tension and release into your playing just like your favorite modern guitarist.

In this section, you’ll be looking at how you can play two chords at once over any underlying chord progression in order to bring a modern feel to your lines and phrases. Though the concept and ideas in this lesson can be applied to any chord or progression, we’ll be exploring it first over a Cm7 chord.

What is Tritone Side Stepping?

While many of us have checked out side stepping where you move between two chords a 1/2 step apart, you can also bring a modern sound into your lines by playing two different chords a tritone apart over the underlying chord(s) of a given progression.

For example, if you are soloing over a Cm7 chord, you can move between the chords Cm7 and F#m7 (2 minor 7 shapes a tritone apart).

Here are some examples of how you can bring this sound into your practicing and improvising as a jazz guitarist.

A good way to outline these two changes is to use arpeggios for each chord.

Here is how that would look like on the fretboard, beginning with Cm7, then moving through F#m7 and back to Cm7 again.

Here is another lick over a static Cm7 chord, using the tritone side-step arpeggios as the basis for the phrase.

Work this lick as written with a metronome in the given key, and then take it across the neck in all 12 keys. When you’ve worked it out and are comfortable with this line, try writing out a few licks of your own using the tritone side-step arpeggios as the basis for those phrases.

Writing out lines using a specific concept can be a great way to get a handle on a new idea while bringing new lines and phrases into your vocabulary at the same time.

Another pattern you can use with this tritone concept is the 1235 pattern. The 1235 pattern is made famous by John Coltrane, who used it in many of his classic solos including his legendary solo on the tune Giant Steps.

This pattern uses the triad of the underlying chord (135) and mixes in the 2nd for good measure. As well as sounding good over chord changes, the 1235 pattern is fairly easy to play on the fretboard.

Here is an example of the 1235 pattern for both Cm7 and F#m7 played over a static Cm7 chord.

Here is another example of the 1235 pattern used in a tritone side-stepping line over a static Cm7 chord.

Here is a sample solo over a C minor blues chord progression that uses this concept to build every m7 line in the solo.

Do you have a question or comment about this lesson? Post it in the comments section below.