All the Things You Are (Jerome Kern) is one of the most commonly played jazz standards and is often one of the first tunes called at a jazz jam session. Because of the tune’s popularity, many guitarists learn to play All The Things You Are at a fairly early stage in their development. What most guitarists fail to realize is that the piece actually has a fairly intricate harmonic structure that can pose quite a few problems for the beginning improviser or comper.

By understanding the relationship between each section of the tune, and the chords within those sections, you can develop a greater appreciation for the overall formation of the harmony, which will allow you to better navigate the changes in both a solo and chordal fashion.

All The Things You Are – Charlie Parker Intro

Charlie Parker – All the Things You Are Transcribed Solo

To begin this lesson, we’ll start with the famous intro Charlie Parker played on his recordings.

The intro starts on Db7#9 (tritone substitution of V/V), and then goes to C7#9, the V of the first chord of All The Things You Are (Fm7).

Here’s how you play it on guitar:

All The Things You Are – Chord/Melody Arrangement

Here is a chord/melody arrangement of the theme. 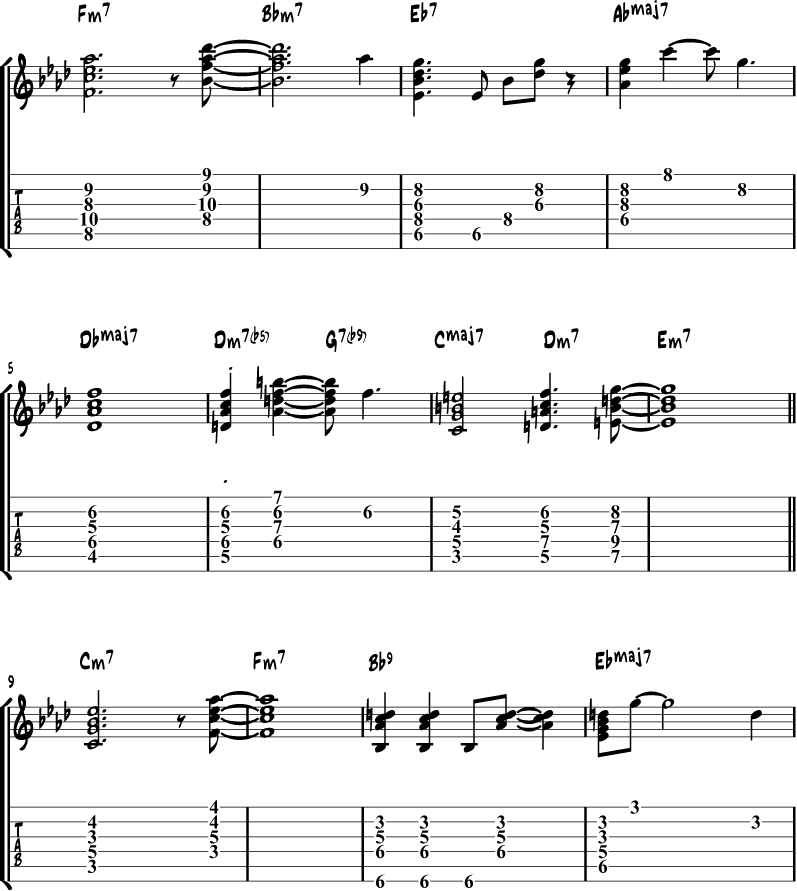 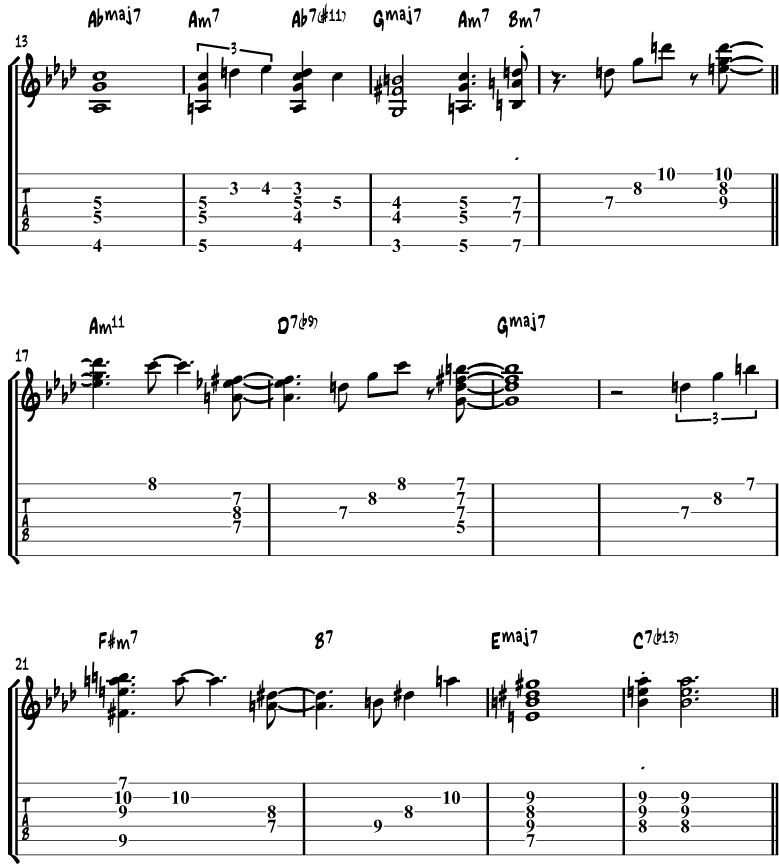 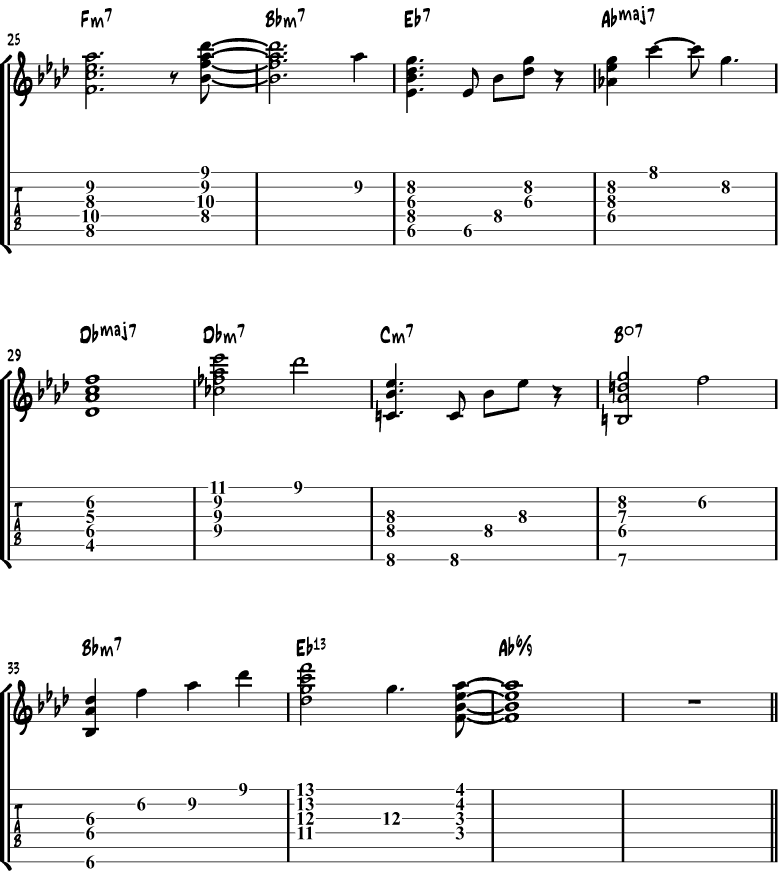 All The Things You Are – Backing Track

Here is a backing track to help you get ATTYA’s chord changes in your ears and to improvise over. The backing track is done with Band in a Box, a great piece of software that lets you create backing tracks on the fly.

All The Things You Are Play-Along Backing Track

All The Things You Are – Key Center Breakdown

All the Things You Are can be divided into four sections, with the first two being sub-sections of one larger section:

The first section of the tune contains bars 1 to 8 and is labeled A.

This is followed by another eight-bar phrase that we will label A’. The ‘ symbol is used to differentiate this section from the first, as they are both very similar, but as you will see,  they are in different keys.

These first two sections can also be thought of as the first “half” of the tune. In classical music, they would be called the exposition.

The third section contains bars 17 to 24 and will be labeled B. The B section is the “contrasting” section as it uses different keys and a different melody line than the other three sections.

In classical music, this section would be called the development section.

The last section of the tune is similar to the first, though just a bit different, so we will label it A’’.

This section is used to “wrap” up the first two sections by restating the melody line in bars 25 through 29, before presenting new material that leads to the final cadence in bars thirty-three through thirty-five. In classical music, this section would be called the recapitulation.

There are two key centers found within the first eight bars of the tune, Ab and C:

There are two key centers found within the first eight bars of the tune, Ab and C:

Even though these chords are in two different keys, the fact that they are a half-step apart makes for a smooth modulation.

The next eight bars have a similar key structure as the first eight, though this time the two keys being used are Eb and G:

Bars seventeen through twenty-four are often referred to as the “bridge” section of All The Things You Are, since the melody line has changed and we are now dealing with two new key centers.

Bars seventeen through twenty-four are often referred to as the “bridge” section of All The Things You Are, since the melody line has changed and we are now dealing with two new key centers.

The first five bars of this section repeat the same progression from bars 1-5 of the A section, before moving on to new material in bar 30.

The second four bars of this section, 29-32, contain an idiomatic jazz progression that is commonly found throughout the jazz standard literature, IVmaj7-IVm7-IIIm7-bIIIdim7. The progression starts with a IVmaj7 chord in bar 29, which then becomes a IVm7 chord, before moving down to IIIm7 and finishing on a bIIIdim7 chord.

After the descending section, the tune finishes with a 2-5-1 in the tonic key of Ab.
Again, the last bar of this section contains a short 2-5 in F minor, as we saw at the end of the bridge. This is used to turn the tune around to the first chord at the top of the form, Fm7.

The bIIIdim7 (Bdiim7) chord then resolves down to the IIm7 (Bbm7) chord in bar 33. Being able to convincingly comp and solo through this section of the tune will not only help you with AATYA, but will give you a leg up on other tunes that contain this, or fragments of this, progression.

All The Things You Are – Roman Numeral Analysis

Below is a Roman numeral analysis of All The Things You Are.

Notice how similar each section is to the other sections of the tune:

Knowing the Roman numerals will not only help you to understand the harmonic structure of AATYA, it will also help to transpose this tune into other keys. It gives you an idea of how important certain progressions are in the jazz idiom, such as the 2-5-1 chord progression, which occurs ten times during the thirty-six bars of ATTYA.

If you are having trouble remembering the Roman numerals to this, or any tune, try saying them out loud as you are practicing the piece. Don’t worry about the quality of the chord (m7, maj7, etc), just focus on remembering the numbers.

As well as playing the original chord changes to ATTYA, there are a couple of commonly used chord subs that you can learn and apply to both your comping and soloing phrases when jamming on this jazz standard.

You can see the added chord subs written in red in both examples below.

In this chord sub, which you can see and apply in bars 7 and 8 of the first A section, you will climb up the diatonic chords, Cmaj7-Dm7-Em7, before moving down chromatically to the next chord in the tune, Cm7 in bar 9 of the tune.

The second chord subs appear at the end of the second A section, in bars 15 and 16. Here, you will play a common turnaround that starts on the Imaj7 chord and then moves up to the iim7, then the iiim7 chords, before sliding down chromatically through the biiim7 chord to the iim7 chord at the start of the B section.

Here are those two common ATTYA chord subs on paper. After you have looked them over, and listened to the audio example, try comping over ATTYA and inserting these changes into your playing in order to feel and hear how they sound in a musical situation.

Here are those two common ATTYA chord subs on paper. After you have looked them over, and listened to the audio example, try comping over ATTYA and inserting these changes into your playing in order to feel and hear how they sound in a musical situation.

Since there are so many 2-5-1 progressions in All The Things You Are, it might be a good idea to check out the licks in this lesson: 2-5-1 Jazz Guitar Licks

Here are 2 Chet Baker examples over the VI II V I progression starting on bar 9.

In this first lick, Chet Baker plays an Abmaj7 arpeggio over Fm7, resulting in a minor 9 sound:

On the next chord (Bb7), he switches to an Ab7 arpeggio, emphasizing the b13:

When I teach this song to younger or less experienced players they usually have trouble navigating through bars 29-32, the descending chord section. Most of these players try and navigate through the changes using big, bulky two-octave scales and arpeggios which cause them to be late on the next chord, or not get there at all.

Instead of trying to work out larger groupings of notes over this section, I’ve found that it can be beneficial to pick a short four to six-note motive to base ideas of during this section.

In the first example, we have a motive built of the one-octave arpeggio for each chord. I’ve switched up the rhythm a bit to avoid running eighth notes, but have kept the same rhythm over each chord to make give the line a sense of melodic and rhythmic continuity.

In the second example I have kept the same rhythm but instead of using the 1 3 5 7 arpeggio, the line is based on the 3 5 7 9 arpeggio of each chord. This type of arpeggio comes in handy when playing with a bass player or another comping instrument, as the root is already being heard and therefore we do not have to reiterate it in our lines.

In the second example I have kept the same rhythm but instead of using the 1 3 5 7 arpeggio, the line is based on the 3 5 7 9 arpeggio of each chord. This type of arpeggio comes in handy when playing with a bass player or another comping instrument, as the root is already being heard and therefore we do not have to reiterate it in our lines.

When playing 3 to 9 arpeggios, you are using arpeggios you already know in a new situation, which you can see in the text below each bar of the melodic pattern.

Here’s an example of what Charlie Parker plays over these chords.

Notice that he plays a b9 as a passing note over the Cm7, and not the natural 9. This is because Cm7 is the III in the key of Ab major, which contains a Db, not a D.

Now that you have a better understanding of the harmonic layout of All the Things You Are, try and analyze other jazz standards in a similar fashion. Being able to quickly recognize key centers, and short excursions outside of the main key areas will make sight-reading any tune a breeze.

Try writing out the key and Roman numeral analysis for one of your favorite standards, then once you feel confident enough, try calling out the names of the chords and their function without writing them down. Having an understanding of any tunes harmony will make your solos have a deeper connection to the tune.

15 thoughts on “All The Things You Are”