In this lesson, you will learn how to play the classic jazz standard Stella By Starlight, written by Victor Young. Stella is one of the most popular jazz standards played today and one every jazz guitarist should have under his fingers. 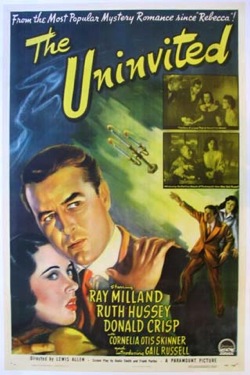 The harmony and melody of Stella By Starlight are derived from the soundtrack of the movie The Uninvited (1944).

Stella is a harmonically complex, but also a versatile standard because it can be played as a ballad, at medium tempos, as well as fast tempos.

This chord melody arrangement of Stella by Starlight is meant to be played in a typical jazz guitar trio (guitar, drum, and bass).

In a jazz trio without piano, there is no one to play the chords but you. Since you are also the one to play the melody, you have to combine playing chords and melody notes.

Something to look out for in a chord melody arrangement like this is that the chords don’t get in the way of the melody.

When playing a chord melody arrangement, the melody notes are what’s important, and the chords are there to support the theme rhythmically and harmonically, but they may not overshadow the notes of the theme. 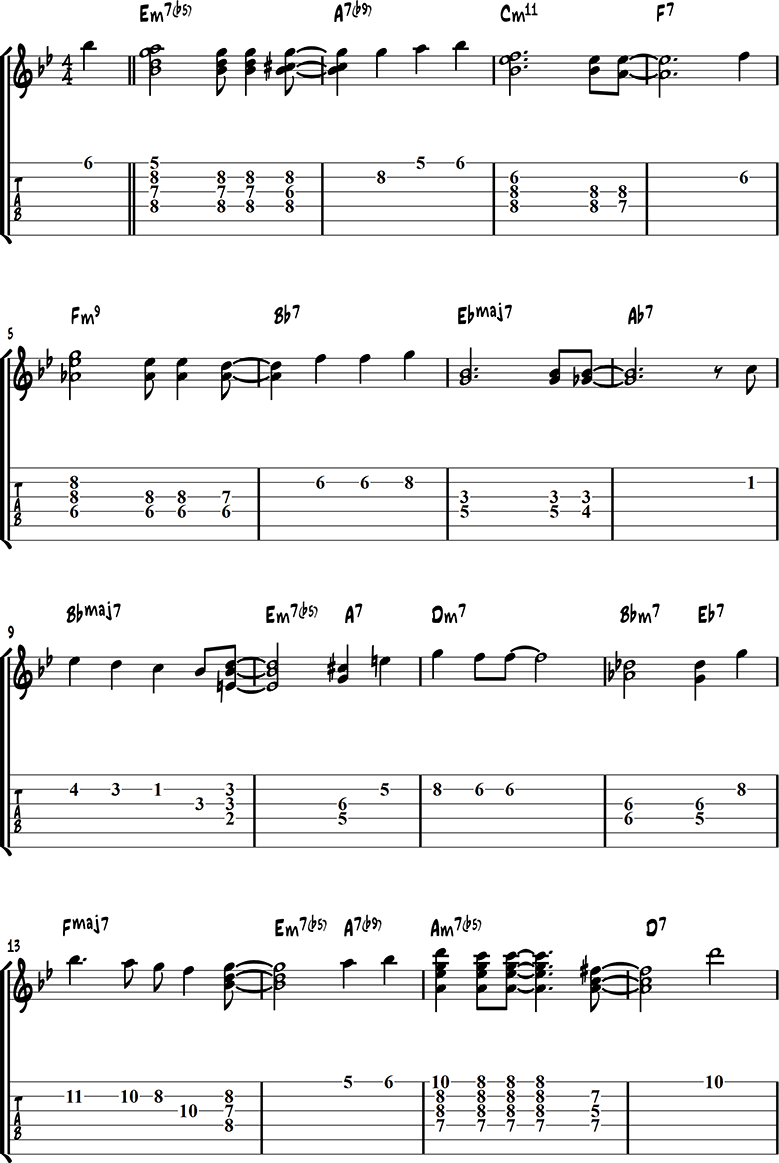 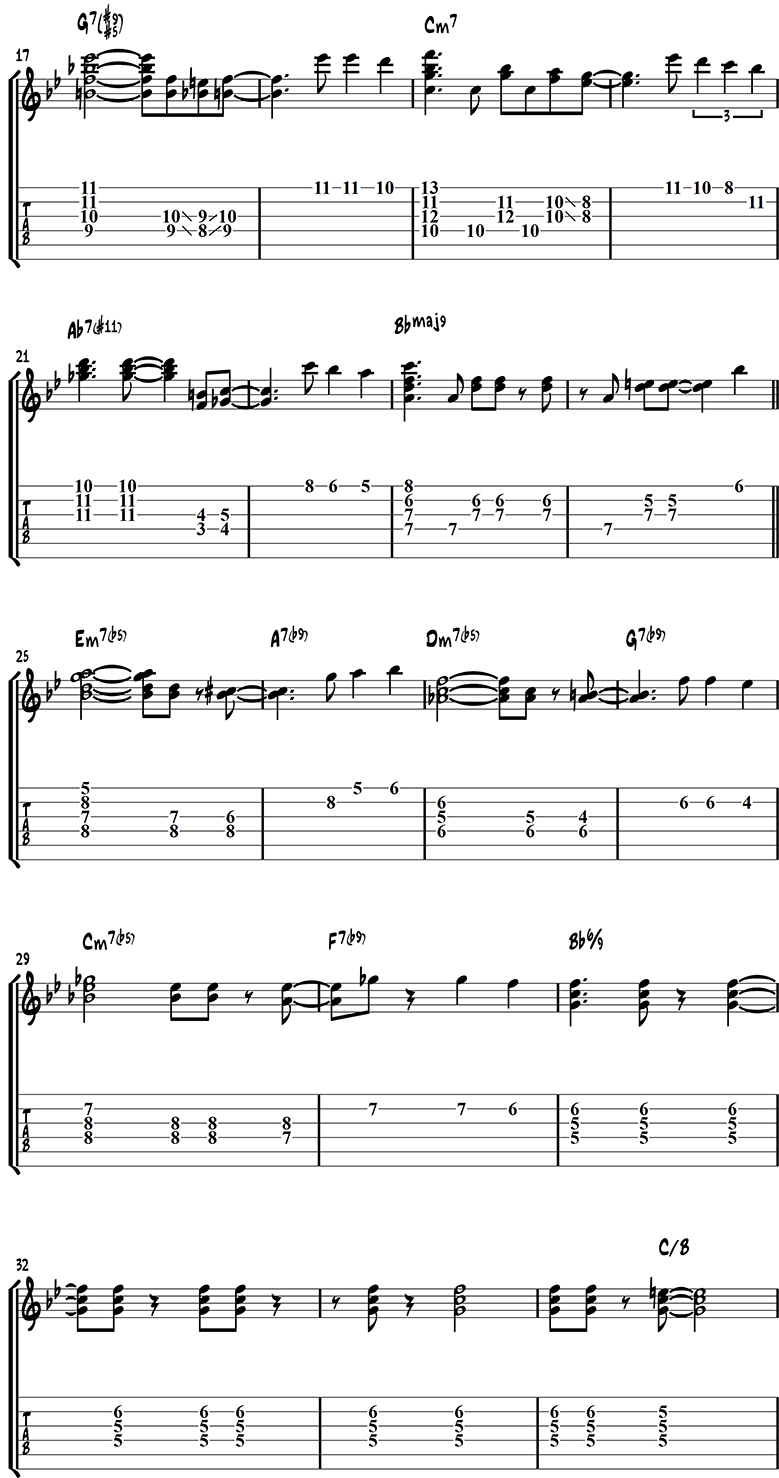 Some clarification about what I’m playing (I omitted the obvious):

The harmony of Stella By Starlight is not very straight-forward because there are a lot of non-diatonic chords and ii V progressions that don’t resolve to the I.

Stella is in the key of Bb major and has 32 bars. The standard has a “vague” AABA structure, but not in the traditional sense such as in a rhythm changes. A better way to describe Stella’s form is ABCA’.

Here is a scale analysis of Stella’s “modern” chord changes, as played by Miles Davis on his album My Funny Vallentine: Miles in Concert. 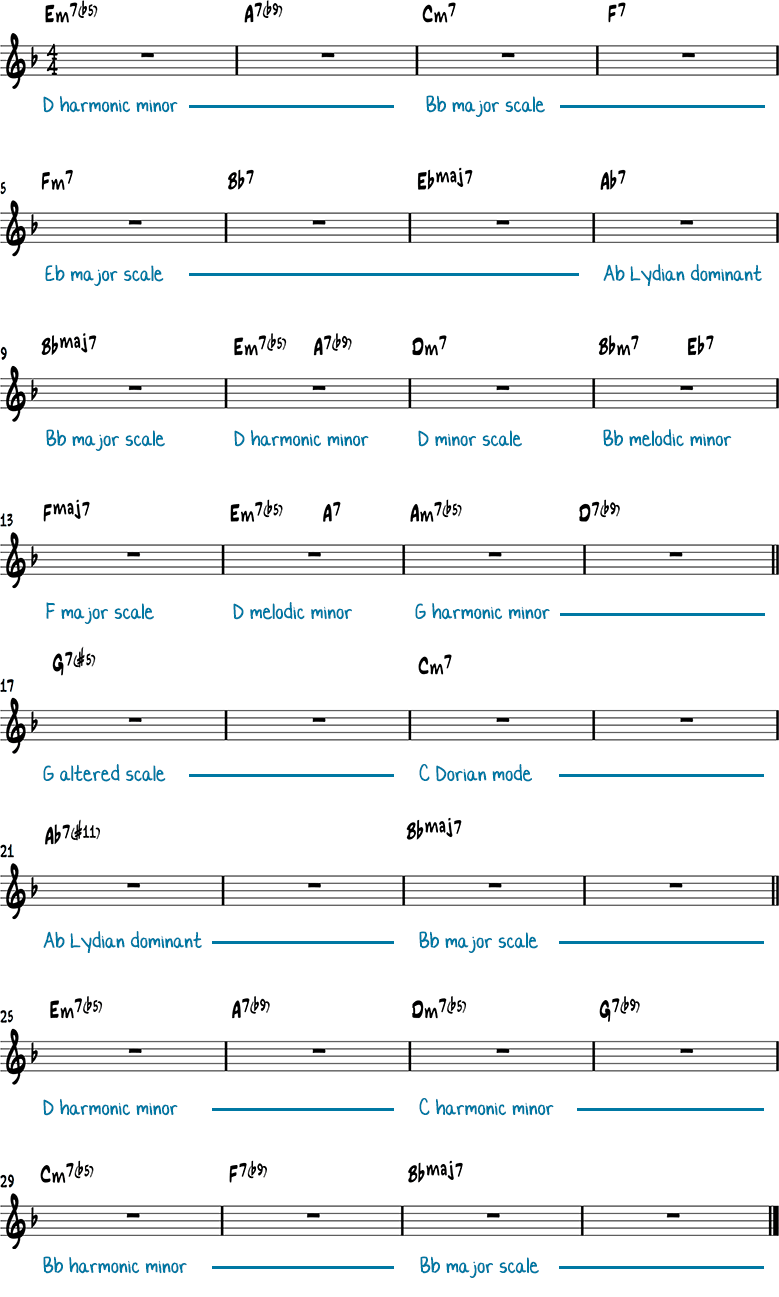 Stella by Starlight starts with a minor ii V progression (Em7b5-A7b9) without a resolution to the I (Dm7). There are a lot of these unresolved ii V progressions in Stella.

The scale of choice here is D harmonic minor.

In bar 3, we would expect a Dm7 chord, but instead, the harmony goes to a Cm7 chord that is part of another ii V that doesn’t resolve, this time in the key of Bb major.

This is a backdoor ii-V to Fmaj7 in the next bar.

The scale of choice here is the Bb melodic minor scale.

Here are Stella’s original chord changes, composed by Victor Young for the movie The Uninvited.

The most important difference between Victor Young’s changes and the chords played by Bill Evans lies in the first 2 bars.

Bbdim7 is a common substitute for A7b9 because they share four chord tones, as you can see below: 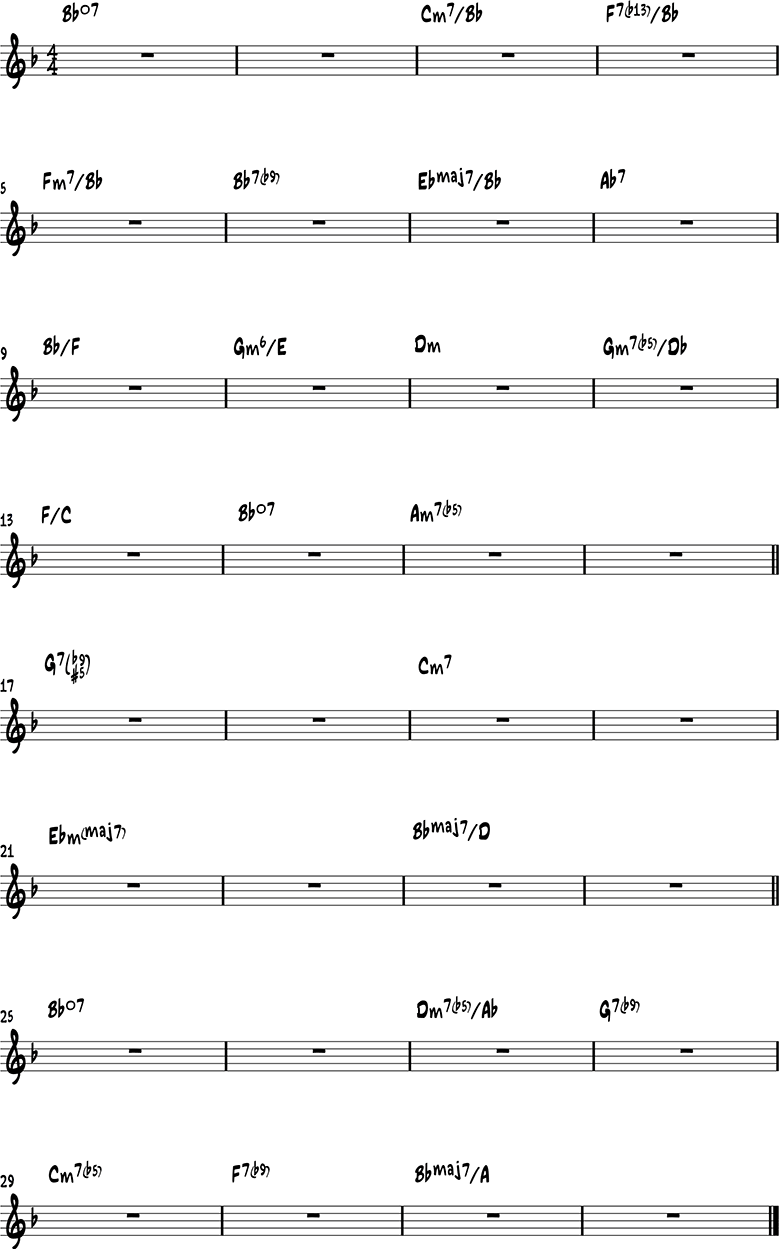 As you can see in the scale analysis above, Stella by Starlight is not simple to improvise over.

Changing scales every bar is not easy and doesn’t sound very musical, so it’s better to rely on arpeggios or focus on voice leading.

A good voice leading makes your improvised solos sound natural and gives you a framework to base your solo on.

Here is a voice leading example to get you started. The numbers in blue indicate which chord tones (or tensions) are played.

11 thoughts on “Stella By Starlight”