Joe Pass is undoubtedly one of the greatest jazz guitarists to ever play the instrument. He could play single-line solo, chord soloing phrases, perform in a trio, duo or solo setting with the best of them, and always be instantly recognizable by his tone and approach to the melodic and harmonic sides of jazz guitar playing.

Joe Pass started playing guitar when he was 9 and he was already playing at weddings when he was 14. In his 20’s he moved to New York, where Joe Pass got captured by the sound of bebop, but unfortunately, he also picked up a habit well known to jazz musicians of that time: heroin.

The next decade was wasted for Joe Pass, spending time in jails, until he entered Synanon, a drug rehabilitation center. In the center, he formed a band with other patients and recorded the album Sounds of Synanon, which was very well received by the jazz critics.

After 3 years in the center, he was cured of his addiction and he could move on with his musical career. He started playing in Los Angeles and got involved in the studio scene. In 1973 he recorded Virtuoso, an album that made him famous for solo jazz guitar playing.

In this lesson, we’ll be digging into 12 classic Joe Pass sounding licks.

After learning these lick in the given key, at a number of different tempos, check out the practice tips below to take this idea further and properly integrate it into your jazz guitar phrases and solos.

How to Practice These Licks?

To help you take this lick further in your jazz guitar practice routine, here are some of my favorite ways to practice licks:

The first Joe Pass lick that we will explore is a short ii V I phrase in the key of G major.

Although the second half of the lick is pretty straight forward, there is an interesting melodic technique over the Am7 chord at the start of the line that Joe Pass often used.

Here, there is a 3 to 9 arpeggio (Cmaj7) being used to outline the Am7 chord in the ii V I. Playing a maj7 arpeggio from the 3rd of any minor 7 chord is a common technique found in Joe’s solo lines.

To work on this idea further, try playing minor 7 chords, followed by maj7 arpeggios from the 3rd of that chord.

For example, play a Gm7 followed by a Bbmaj7 arpeggio: 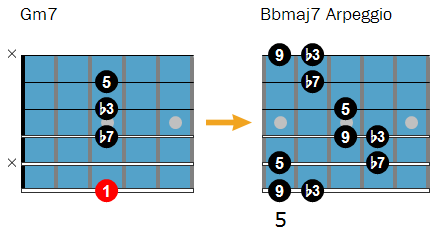 Or a Dm7 followed by an Fmaj7 arpeggio: 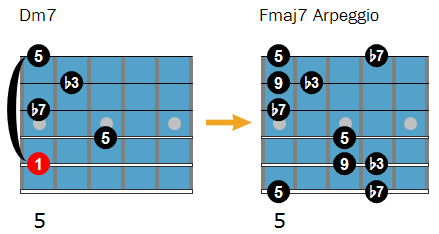 In the next three-bar ii V I lick in the key of F major, you will find triplets being used in the first and second bars. This is a rhythmic characteristic of Joe’s playing and can be helpful when bringing a Joe vibe to your lines from a rhythmic perspective.

The triplet in bar two uses the b9-#9-b9 trio of notes, which are common melodic choices for Joe when soloing over 7th chords. Notice how the b9 is resolved into the root of the C7 chord so that it is not left hanging, bringing the tension to a close before moving on to the next chord in the progression.

These are the chords you can keep in mind when playing a #9 to b9 voice leading.

The b9 chord is a diminished chord built on the 3rd of C7: 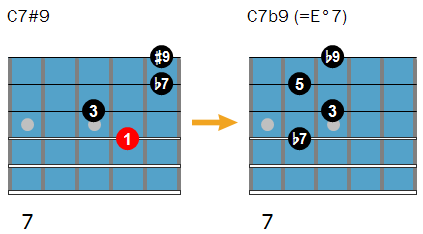 There is also a plain F triad at the start of the Fmaj7 chord in bar three of the phrase, which is a basic melodic device: 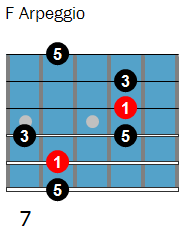 The next single-note line is a minor ii V I line in the key of A minor.

There are some larger intervals in the first measure which Joe liked to use to build interest in his phrases.

The approach notes in the third bar are characteristic of Joe’s improvisations.

In the second bar, you will notice the notes G and F (#9 and b9) over the E7alt chord, which are used to build tension before being resolved into the root of that chord leading to the Am7 at the end of the phrase.

These are the voicings you can think under the #9 and b9: 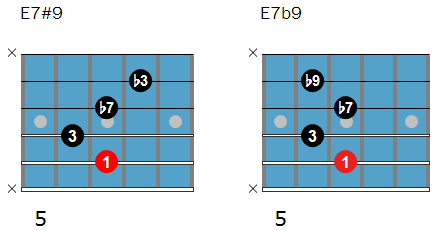 The diminished scale is a symmetrical scale, what means that it comes back every minor third:

This results in the following sounds over C7:

Here, a D minor triad arpeggio with an added 9 is played over the Bm7b5 chord, resulting in the following sounds:

On the E7 an A harmonic minor scale is played:

The harmonic minor scale is the first choice to play over dominant chords that resolve to a minor chord.

A nice ii V I lick starting with a pattern and then going to a Bbm7 arpeggio over the Db7 (sounds like Db13):

In this Joe Pass inspired chord lick, you can hear many of the idiomatic sounds that make up many of Joe’s solo guitar licks and phrases.

For this lick, try breaking it down into the mini phrases that make up each bar, that way you will be able to extract these ideas and use them in different combinations when coming up with your own solo jazz guitar lines.

The first Joe Pass chord lick that you will explore is a ii V I phrase in the key of G major.

Here, there are a number of drop 2 chords being used on the top-4 strings to outline the phrase, with a chromatic chord in the first measure that leads from the iim7 to the V7.

You might recognize this lick as a bit of a quote from the melody of In Your Own Sweet Way, which Joe recorded and performed throughout his career.

The Eb13 chord is a half-step approach chord that takes the listener from the Am7 to the D7 chord.

The half-step approach chord is an easy technique you can use to bring movement and variation into your chord comping or soloing. It works by approaching a chord from a half step below or a half step above the target chord.

For example, to go to an Am7 chord, play the G#m7 as an approach chord. This is an approach from a half step below the target chord: 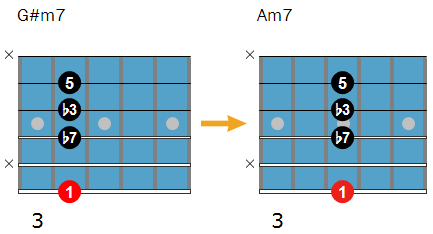 Or you can approach the same Am7 from a half step above the target chord: 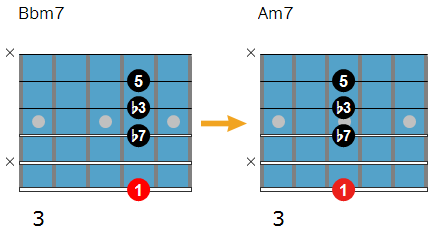 The following ii V I chord lick in the key of F major uses rootless chords throughout to bring added colors to each chord in the phrase.

The Bbmaj7 chord used over Gm7 in bar one is the same 3 to 9 concept you saw earlier in this lesson.

The Bbmaj7#11 chord played over C7 in the first half of that phrase is a common substitute used to bring a 13th sound to any 7th chord you are soloing over.

The red triangle on the chord diagram is not played, it just shows the root of C7: 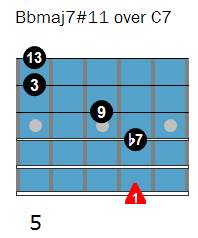 The next Joe Pass lick is a long ii V I in the key of A minor.

The interesting part of this line is the Dm7b5 chord added over the E7alt part of the phrase: 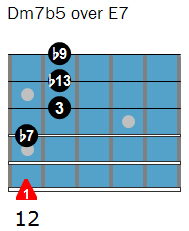 As you can see in this chord lick, you can play iim7b5 – ivm7b5 – bIIImaj7 over a minor ii V I progression.

This chord lick uses a favorite rhythm from Joe’s solo guitar work, you can hear a similar idea during his version of Have You Met Miss Jones.

The idea is that you break up the chord into the bass note and the top 3 notes of the shape, alternating back and forth until you get to the chromatic approach notes in the last two 8th notes of each bar.

Try accenting the chords only, not the bass notes, to bring an added Joe sound to the mix with this line.

This last lick is a bluesy phrase with double stops that works great over ii V Is.

Here are a couple of important things that you can notice and take away from this lick, besides learning the lick itself.

Try bringing these larger concepts into your practice routine as you apply these ideas to soloing over ii v I chords, other chord progressions and full tunes in your daily practice routine:

In this study over the chord changes of Autumn Leaves, you will see 6 licks from the above lesson being used in a musical situation.

Try working this solo in 8-bar sections so that you can break down the whole solo into manageable chunks as you work through it. From there, you can bring these shorter phrases together as you build up to being able to run the solo as a whole, taking these shorter licks to a larger-form application.

Joe Pass was a true legend and probably the best all-around jazz guitarist who ever lived. Learning his lines can help you get into the ears, hands, and thought-process of this legendary player.