Patterns are small melodic or rhythmic units that are very useful for improvising and easy to memorize. When moving beyond scales and arpeggios in your guitar studies, the next logical step is to build your vocabulary by learning these common jazz guitar patterns.

By learning how to play and solo with these classic jazz patterns, you will not only increase your vocabulary, but you will also enhance your understanding of how to mix scales, arpeggios, and chromatic notes. Study these patterns and you will see they slip unconsciously into your solo improvisations.

In this section you will learn 6 major jazz guitar patterns, which you can study in the given key of C major, but also take to all 12 keys across the fret board.

In this first maj7 jazz guitar pattern, you will be highlighting the b3 (a blue note) and the 6th (a common resolution note with maj7 chords). When soloing over maj7 chords, you can bring in the b3 interval, which comes from the minor blues scale, in order to add a bluesy vibe to your maj7 soloing lines.

Two commonly used color tones are the 6th and the 9th, and so working on targeting these notes at the end of a maj7 line will allow you to confidently focus on these colors in your soloing ideas.

Beginning on the root, this line uses a common jazz guitar technique, where you play R-7-R and then ascend the diatonic arpeggio from there.

Arpeggios are an important technique to use in your jazz guitar solos, but they can sometimes become monotonous, especially when starting on the root. This R-7-R movement allows you to play a maj7 arpeggio from the root, but avoid simply ascending that arpeggio as you move forward in your line.

Here, you are playing an Em7 arpeggio over a Cmaj7 chord, which builds a rootless Cmaj9 sound over the underlying chord change. Playing m7 arpeggios from the 3rd of maj7 chords is something that every great jazz guitar player used at one time or another in his solos, and so it’s worth exploring further.

Here is how that arpeggio functions when played over a maj7 chord:

Now that you have this concept in your head, and under your fingers after learning this maj7 pattern, try taking it to other maj7 chords in order to further integrate this concept into your vocabulary.

Now, you are going to bring in the second blue note in this lesson over a maj7 chord, the #4 (b5). You can use the #4 interval over a maj7 chord (along with the natural 4), in order to bring a bluesy sound to your improvised lines.

When you have worked this pattern out, try soloing over a maj7 chord backing track and bring both of these blue notes to your lines to see how they sound when combined in a musical situation.

As was mentioned in the previous pattern, you can combine both the b3 and b5 (#4) blue notes into your maj7 lines when channeling a blues sound in your playing. To help you get started with these combined blue notes in your soloing, here is a maj7 pattern that uses both of those notes in its construction.

The last maj7 pattern in this lesson uses an Em triad over a Cmaj7 chord to create a rootless Cmaj7 sound in the line. When soloing over maj7 chords, you can play a minor triad from the 3rd of that chord in order to outline the chord tones of that change, but avoiding the root in your line at the same time.

This easy, but effective pattern over a C6 chord is based on the C major pentatonic scale.

After you have learned these 7 major jazz guitar patterns, try writing out 5 or 6 of your own using the concepts and techniques explored in this lesson. As well, you can transcribe patterns from your favorite jazz guitarists and favorite jazz solos in order to build your maj7 pattern knowledge from an aural perspective.

Because Dominant 7th chords appear at least three times in any jazz blues chord progression, and make up the tension chord in a ii-V-I, it is important to have a number of classic patterns under your fingers in order to confidently and accurately outline this important chord change.

In this section, you will learn 8 classic dominant jazz guitar patterns as you expand your 7th-chord soloing palette and build your chops at the same time.

To begin, here is a short Dominant pattern that uses voice leading to connect the b7 of G7 to the 3rd of Cmaj7.

Working on soloing over Dominant 7th chords means not only soloing over that specific chord, but resolving that chord into the next change in the progression, and this is a perfect example of how to do that.

Here, you have a Bebop Scale cliché that brings out the bebop passing note, the major 7th interval over G7, that then resolves to the Cmaj7 chord in the second bar.

The bebop scale is an essential tool when soloing over 7th chords in a jazz setting, so it would be worth spending time on in the woodshed to get your fingers and ears around this important sound.

Here is an example of using the altered scale to create tension over the V7 chord in a short ii-V-I pattern in C major.

Notice the b13 (Eb), #9 (Bb) and b9 (Ab) intervals being applied to the G7 chord, which all great a sense of tension that you then resolve to the Cmaj7 chord.

The altered scale can be an effective way to create a sense of tension and resolution in your lines when soloing over dominant 7th chords.

Here is a short line based on the G7 arpeggio. Sometimes a simple chord-tone line is the most effective what to outline a Dominant chord when soloing in a jazz setting.

Another short, chord-tone based line, this is a great pattern for working out arpeggio soloing over 7th chords in your lines and phrases.

As mentioned earlier, the bebop scale is an effective way of soloing over any Dominant 7th chord.

In this example, you will learn a longer bebop scale pattern that also uses a Bdim7 arpeggio to “reset” the phrase back up to the top of the scale.

When soloing over 7th chords, using a dim7 arpeggio from the 3rd of that chord is a cool way to bring a 7b9 sound to any 7th chord line or phrase:

This line brings in the #4 passing note (a blue note), to create a dominant blues sound over a G7 chord.

Mixing notes from the dominant arpeggio and Mixolydian scale, with notes from the blues scale is a fun way to blend these two common sounds in your 7th lines and phrases.

Again, in this final pattern you are blending the blue notes into the line in order to bring a bluesy vibe to the overall phrase.

This dominant pattern is based on this basic E7 chord shape: 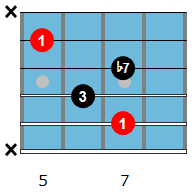 From So What to major ii-V-I progressions, the m7 chord plays a major part in the jazz guitar world. To help you build your m7 vocabulary, this section will teach you 5 must know minor jazz guitar patterns.

By developing your m7 vocabulary using commonly used patterns and techniques, you will allow yourself to confidently and accurately outline m7 chords when faced with these changes in a modal setting, major ii V I or minor ii V I chord progression.

Feel free to learn these patterns in the given key (Dm7), as well as work them in all 12 keys as you begin to take these lines around the fretboard.

In this first m7 pattern, you will be adding a passing note between the root and second note of the scale, in this case D Dorian (if the Dorian mode is new to you, learn more about guitar modes here).

When soloing over m7 chords, you can use passing tones to connect scale tones, and as long as you resolve the passing tones then they will work well to create a sense of tension and release in your phrases.

This next m7 pattern uses an F triad to outline the Dm7 chord, which is a rootless Dm7 arpeggio.

When soloing over m7 chords, you can play a major triad from the b3 of that chord in order to highlight the b3, 5 and b7 in your lines, essentially outlining the change without using the root in your line.

In this Django Reinhardt inspired pattern, you are using a Dm7 arpeggio with a passing note between the root and b7 of the chord.

Again, adding passing tones to your lines, either scale or arpeggio based, is an important technique that should be explored further in the practice room.

Here you will use the D Dorian scale to create a longer pattern over a Dm7 chord, which is what many players refer to as a “first choice” scale over any m7 chord.

Featuring the natural 6th interval, the Dorian mode has a “brighter” sound to it than the Aeolian scale, and is a favorite m7 scale choice by jazz soloists on any instrument.

This last m7 pattern, inspired by Pat Metheny, uses the D Dorian Scale, as well as a dissonant chromatic note (Eb), to create a slippery sound over this Dm7 chord.

When using chromatic notes in this way, with a delayed resolution as you can see between the Eb on beat 2 and the D on beat 3 with the B in between, you need to be careful that your chromatic note doesn’t sound like a mistake along the way.

In this section you’ll find guitar patterns that work well on half-diminished chords (m7b5). As always, try the patterns in different keys and fret board positions.

The first pattern in this article uses an Fm idea over Dm7b5.

By doing this, you are focusing on the 3 to 7 triad, the triad built from the 3rd of the underlying chord, which in this key is Fm over Dm7b5.

As well, there is one G note in this lick (the 11th of the chord), which we will see throughout this lesson as a go-to note when soloing over any m7b5 chord.

Here, there is a chromatic passing tone being added between the 3rd and 4th of the scale (Gb) to bring a Bebop flavor to this line.

Adding chromatic notes to m7b5 runs can be tricky, as it is such a strong chord sound, but it can be done and here is an example of just such a set of notes in action within an improvised line.

As well as superimposing four-note arpeggios over m7b5 chords, you can also focus on triads in your soloing over this common chord quality.

In this line, you will find Fm and Gm triads being used to outline a Dm7b5 chord, again using familiar shapes, the triad, in a new situation in order to outline a m7b5 chord in your lines and phrases.

This final lick uses a triplet rhythm to break up the chord tones that are the basis for this phrase.

Sometimes something as simple as changing the rhythms that you use over a chord is enough to breathe fresh life into your lines and phrases.

Try experimenting with different rhythms when soloing over m7b5 chord to see where this approach takes you in your soloing and improvisations.

Though soloing over m7b5 chords can be tough when first studying jazz guitar, with a bit of practice and some cool-sounding licks under your fingers, you’ll be ready to blow over this common jazz chord with both confidence and authenticity.