While transcribing and playing Django Reinhardt’s solos, I noticed he repeats the same shapes and musical ideas again and again. I wondered how he managed to use the same idea yet always sounds so fresh, vivid and new? I never noticed that he repeats himself in any way until I actually played his solos.

The answer is that Django Reinhardt used his musical ideas in a slightly different way each time. The inner rhythm of his phrasing is always changing.

The place in the bar in which he starts each phrase is different every time. He creates melodies that you can always sing because he follows his musical taste and not his fingers.

In this lesson, you will learn a few of Django’s improvisational ideas. Play the example phrases, try to understand them and practice until you can use each concept in a variety of ways.

That way you’ll get Django’s ideas and spirit into your own guitar improvisation. You will learn something far better than a few licks – ideas you can use to create interesting, fresh and new solos yourself.

Gypsy jazz guitarist Django Reinhardt was the first famous European jazz musician. Born in Belgium and raised in a gypsy camp near Paris, he first learned to play the violin, but later switched to banjo-guitar. At the age of 12, Django Reinhardt played good enough to play professionally.

When you want to play over a chord, you can use its arpeggio, but how can you create a new musical sentence each time from the same arpeggio?

For Django, the answer was simple: you can create a new phrase just by the way you approach one of the notes of the arpeggio and then play the rest of the notes straight.

[2:12 in the video] In the following phrase Django uses an enclosure (half-tone before the chord tone and diatonic note above the chord tone) to the note A (the 5th degree of Dm) and then a simple Dm6 arpeggio.

[5:20 in the video] In the next phrase, you have almost the same idea. Here the chords move from E7 to Am. On the first bar of Am, Django plays two eighths and a quarter instead of a quarter and two eighths.

You see that you can use the same idea again and again with tiny changes and still sound interesting. This is much better practice than learning a lick and “copy-pasting” it.

[9:30 in the video] In this third phrase, I play the exact same idea over Dm but the enclosure is played from the beginning of the bar and Django reaches the target note D at the 2& beat. The idea is the same though, an enclosure of a target note and the simple triad played after that.

[11:12 in the video] In the next example, we have simple enclosures of the 5th and 1st degrees, preceding by an octave jump which Django played very often.

Notice how interesting it is when Django starts this whole idea in the preceding bar, on E7. He anticipates the Am chord.

Try to implement this and improvise with this idea in different places in the bar.

In the next phrase, the same thing happens over Am. The Am arpeggio starts on the 1+ beat just after the enclosure.

In this phrase, Django plays a Dm6 arpeggio, just after the enclosure that appears on the previous bar, anticipating our target note.

The dim7 chord is a symmetric chord, with 3 half-tones between each one of its notes.

Django used this substitution a lot, and again, each time in a different way.

For example: on an E7 chord you can play the arpeggios of G#dim7, Bdim7, Ddim7, and Fdim7:

This is how the G#dim7 arpeggio looks on the fretboard:

Here are some examples from Django’s Minor Swing solo: 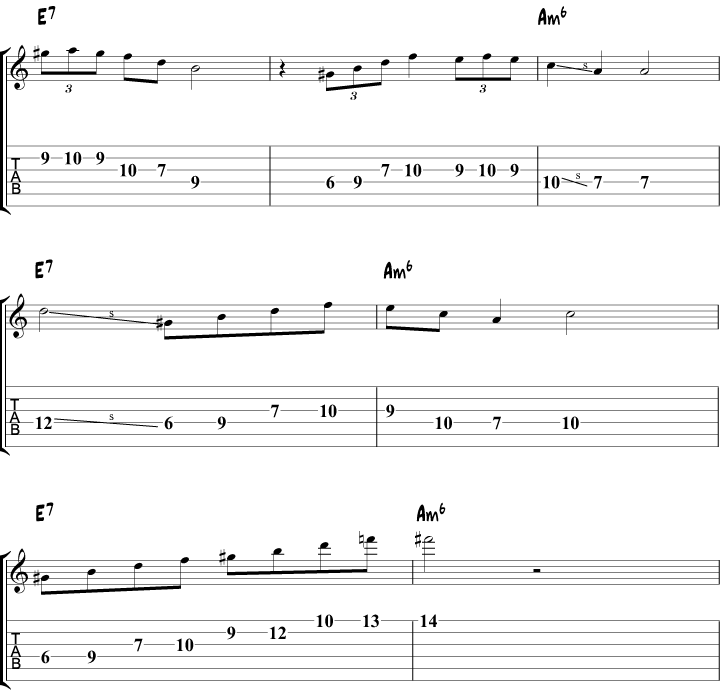 [13:44 in the video] There are three important movements: downstroke, sweep, and upstroke:

Here is a common gypsy jazz phrase with the dim7 arpeggio: 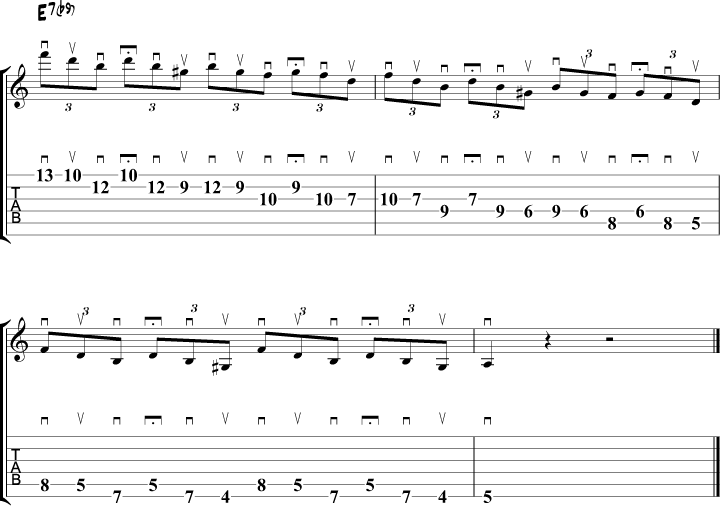 The Chromatic Scale [12:35 in the lesson video at the top]

The chromatic scale is one of Django Reinhardt’s trademarks. It is also a good technical exercise for mastering rest-stroke picking.

Django uses this scale in various ways – you can hear a complete long ascending run in his solos over Nuages and Montaigne Sainte Geneviève. Or you can hear the descending scale in the middle of Minor Swing and Dinah.

He would play this scale in sixteenth notes and in triplets, short or long, starting on a different beat inside the bar each time.

[15:08 in the lesson video at the top] Here are the tabs for the chromatic scale: 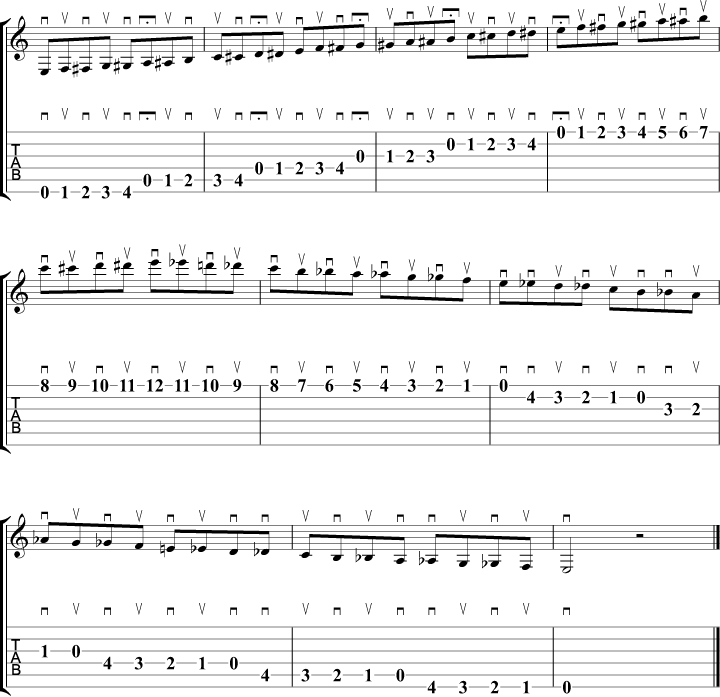 The “rule of gypsy jazz picking” says that you need to start each new string with a downstroke.

[14:24 in the lesson video at the top] To avoid that, modern Gypsy jazz players play the fake chromatic scale – which uses only 4 notes per string to keep the alternate picking going all the time:

[16:09 in the lesson video at the top] In the following lick, Django uses the descending chromatic scale with a triad at the end:

Toward the end of Django’s solo over Minor Swing, Django uses the descending chromatic scale, combined with a diminished arpeggio, enclosures, and an Am arpeggio: 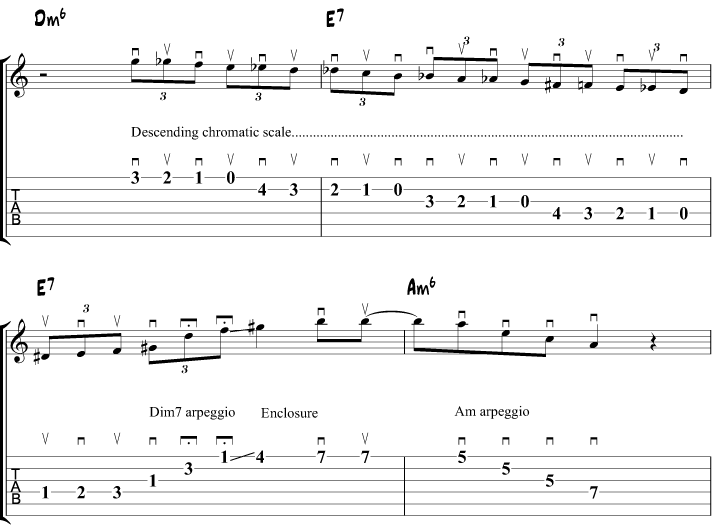 [17:35 in the lesson video at the top] This idea is taken from Django’s solo over Django’s Tiger.

Use a pair of notes each time:

[19:00 in the lesson video at the top] Here’s an example over the C major chord:

Click HERE to improve your gypsy jazz solos by mastering all the arpeggio shapes you need!