In this lesson, you will learn how to combine chords with a walking bass line, a concept that is becoming more and more in demand these days. As club and restaurant owners are cutting budgets, one way to keep our gig as a guitar player is to slim down the ensemble to a duo or solo.

A walking bass line walks through the chord progression, one note per beat. Its function is to outline the chords of the progression and provide a smooth transition from one chord to another.

While walking bass in a band is generally played by the bass guitar or double bass player, being able to play walking bass lines is an essential skill for jazz guitarists when playing without a bass player.

The difficulty in walking bass on the guitar lies in the combination of playing chords and bass at the same time.

Walking bass on guitar is usually played fingerstyle. Use your thumb for the bass notes and your other fingers to comp the chords.

In this lesson, you will learn how to write and play a walking bass line over a 12-bar blues in F.

Being able to walk a bass line and comp the chords at the same time is an invaluable skill to have and one that will allow you to work in situations where other guitarists cannot.

The very start in learning how to walk a bass line is being able to play the root note of each chord on the lowest two strings (A and E strings) of the guitar.

The root note will usually be the first note of every bar throughout the entire chord sequence.

In this example, the roots of each chord are written out on the lowest two strings. 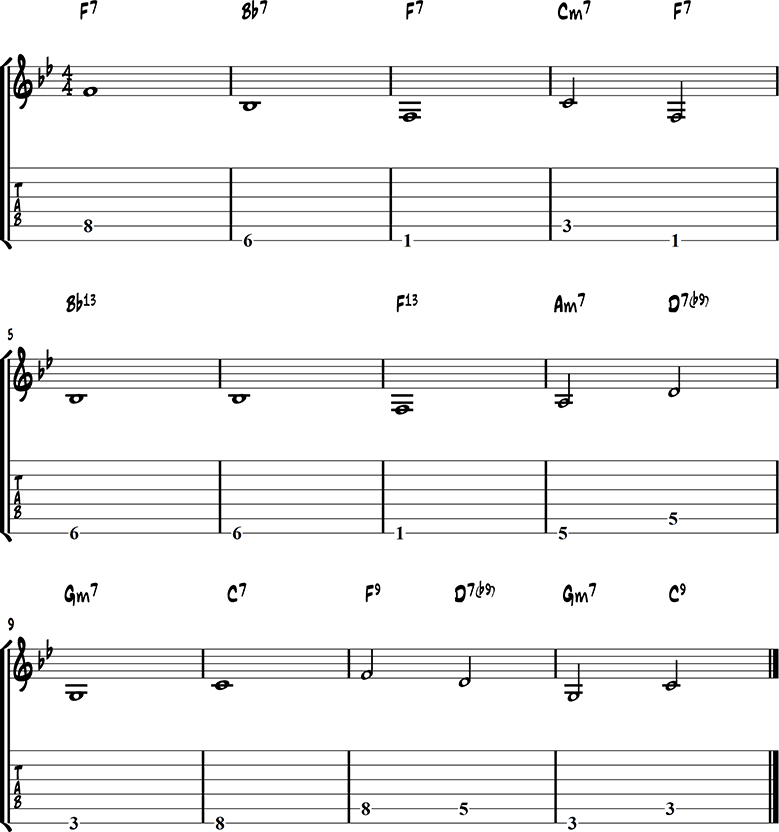 In the next step of constructing walking bass lines, we will play what bass players refer to as half time, where the half note is the rhythmic focus of the line.

This is done by adding a note on the third beat of each bar for a duration of two beats.

This note can either be: 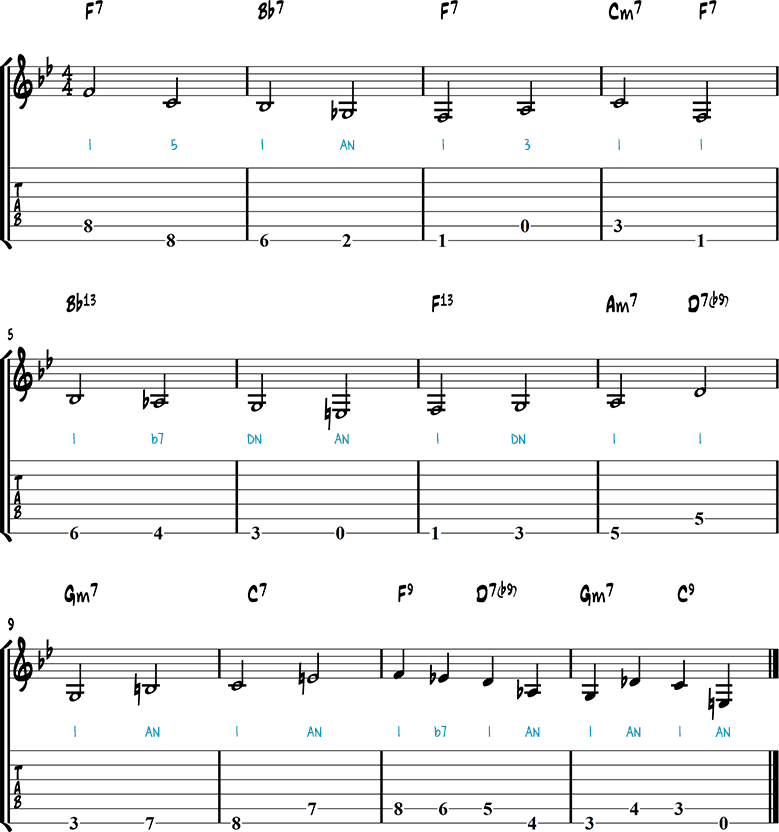 Notice that we now have a rhythmic change in the last two bars. Because the chord movement is twice as fast in these two bars we have to use quarter notes when adding our approach tones.

This leads us nicely into step 3 which will deal with what bass players refer to as walking time, where the quarter note is now the focus of the line.

Now that we have introduced a quarter note pulse in the last two measures of example 2 we can now “walk” a bass line through the entire blues progression.

When adding the extra notes there are two things to keep in mind: 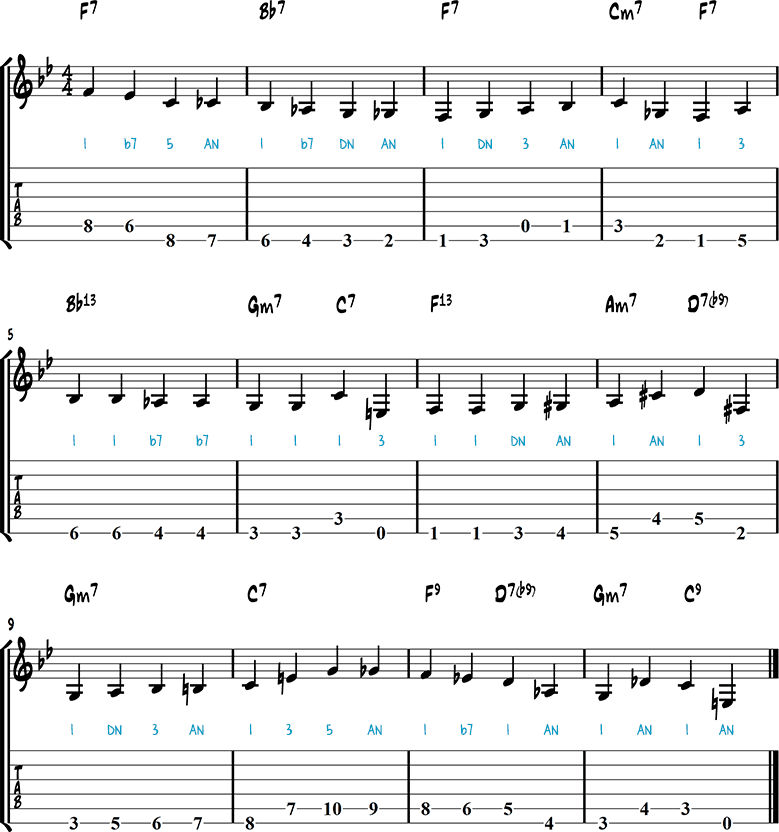 Now that you know how to build a walking bass line, we are ready to add some chord voicings.

Shell chords are a type of voicing that is often used in walking bass lines, but drop 2 and drop 3 chords are used as well.

Here are some easy-to-grab chord voicings that we will be using:

Now that we have the bass line and the chords under our fingers it is time to bring them both together.

This is a common rhythmic choice for guitarists who walk and comp at the same time, but again once you have this idea down feel free to put the chord in any part of the bar.

The final step is to add some chord substitutions to the progression.

The first substitution occurs in bar 5 of the main example.

Instead of playing two bars of Bb7 or one bar of Bb7 and one bar of B°7, I play a descending chord progression: Bb7 to Ab7 to G7 to C7.

The next substitution happens in bar 10, where I delay the C7 with a C9sus4 chord.

Adding a sus chord before a dominant chord is an effective way to create more movement in your chord voicings.

Gb7 is the tritone substitute of C7 and is another way to create movement in the chord progression.

The chromatic descending line of 13th chords that starts in bar 23 is also the result of a series of tritone substitutions on the normal turnaround.

Memorizing these patterns will make it a lot easier to improvise simple walking bass lines over jazz standards.

Now we are ready to take these same steps and apply them to any jazz tune, be it a blues tune or standard 32 bar tune such as Autumn Leaves. You might want to try writing out the steps when first applying them to other tunes, and once you are proficient at writing them out try and walk/comp on the fly.

Being able to create walking basslines and fill them in with chords on the spot is a great skill to have and will definitely make you (as a guitarist) more desirable in a solo or duo situation.