Charlie Christian is the father of jazz guitar, one of the most important figures in jazz guitar history, and a favorite soloist of many jazz guitarists today. Though he never released an album as a bandleader, his recorded legacy stands to this day as some of the most exciting, and entertaining, in the jazz guitar library. 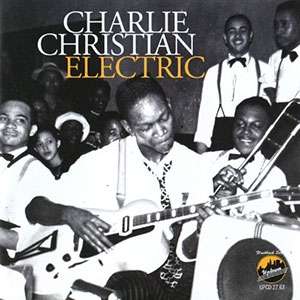 Charlie Christian was the first successful electric guitarist and although he played in swing bands mostly, he was very much influenced by bebop players.

He was a student of Eddie Durham – a jazz guitarist who invented the amplified guitar – and was one of the first guitarists who played amplified. Electric guitar opened up a range of possibilities because guitarists could concentrate on other things besides volume.

Unfortunately Charlie Christian died at the early age of 25 after contracting tuberculosis.

When learning how to play jazz guitar, studying Christian’s playing is essential for players of all musical tastes, experience levels, and backgrounds.

Learning these licks is important when studying Christian’s soloing concepts, but it’s the concepts that will allow you to expand this material in your playing. After you’ve understood how each lick is built, you can take those concepts and apply them to other chords, keys, and tunes.

In this first dominant 7 lick, you’ll see how Christian liked to use the Am7b5 arpeggio to outline an F9 sound over F7 in his solos:

When soloing over dominant 7 chords, you can play a m7b5 arpeggio from the 3rd of that chord.

Another example: if you have C7, you can play Em7b5 to generate that same Christian sound in your solo.

This typical Charlie Christian lick is played over A7 and uses the same m7b5 substitution as in lick 1. The first 4 notes form a C#m7b5 chord shape, a common substitute for the A7 chord. It gives us the 3, 5, b7 and 9 of A7.

Licks like these are nice to play on a B section of a rhythm changes.

This Christian lick starts with an Adim arpeggio over F7:

By working these types of chromatic notes, you too can use them to create interest, energy, and engagement in your own jazz guitar solos.

Moving on, this lick uses a passing note (the B in bar 1), as well as a Bb7 arpeggio in the next segment of the line.

Sometimes the best approach is the most direct approach (such as the diatonic arpeggios), and Christian used this approach often in his solos.

To finish the line, and to break the arpeggio up a bit, Christian uses a C (the 9th), as the second last note in the phrase. When soloing with arpeggios, inserting one or two scale tones, such as the 9th in this line, can go a long way to making your lines sound musical and not like an exercise.

Here is a very typical, and melodic Charlie Christian lick.

By repeating the start of the lick in both sections, Christian leads the listener through his solo but gives them variety at the end to create interest. Repetition is something Christian, and other jazz guitarists, used to great effect when creating phrases in his solos.

When soloing over jazz tunes, don’t be afraid to repeat yourself, using slight differences as Christian did to lead the listener along the way in your solos.

The next lick uses another passing note, which you can see Christian loved to use in his solos, as well as the F minor blues scale to create a V7-I7 line at the end of the blues.

Playing the b3-3 (as you’re doing here with G#-A), was a typical sound from Christian’s era, and one that has stuck in the jazz vocabulary until this day. Because of its longevity, using this approach in your own solos is an essential sound to have under your fingers and in your ears.

In this classic Christian sounding lick, the major blues scale is being used to outline an A7 chord, producing a bluesy, swing-sounding lick.

Using the major blues scale (the major pentatonic scale with an added b3) is a great way to bring a Christian and swing sound to your lines, so feel free to explore this idea further.

Here you see an enclosure over the 3rd of the underlying A7 chord, where D and C are being used to enclose the note C. This type of tension and release line (aka enclosure) is something that can be found in many of Charlie’s and other solos from the swing era.

Enclosures have been used by just about every great jazz soloist over the past 80 or so years, and so it is an important concept to have under your fingers.

This Charlie Christian inspired lick looks at the use of a lower neighbor tone in the first bar to highlight the large leap between the 9th (A) and the 13th (E) of the G7 chord.

By landing on a chromatic note after a leap, before resolving it to a chord tone on the next note, you can bring a strong focus to both the leap and the resolution point in your lines, something that Charlie and other swing musicians liked to do in their solos.

This Charlie Christian lick uses an idiomatic riff that runs from the b3 to the 3 to the 5th of the underlying chord (in this case G7 and Cmaj7).

Mixing the blue note (b3) with the diatonic 3rd and 5th of any chord is something that Charlie and many other swing artists like to do in their soloing lines.

Now that you’ve explored some Charlie Christian phrases on their own, you’re ready to combine them in a soloing study over an F blues chord progression.

Take your time when working these licks together, practicing four bars at a time until you’re ready to combine every phrase to play the entire solo over the backing track.

Most importantly, have fun with this solo, and when you’re ready, take the licks from this lesson and apply them to other tunes.