There are few players that have had a longer and more influential career than the great jazz guitarist Kenny Burrell. Burrell has inspired countless guitarists to make the switch from blues and rock to jazz with his own unique style of blues and bebop inspired playing. 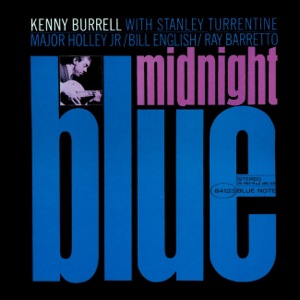 Kenny Burrell has been a high-in-demand guitarist during his entire career. He was Duke Ellington’s favorite guitar player and played with some of the biggest names in jazz music, such as Dizzy Gillespie, Sonny Rollins, Quincy Jones, John Coltrane, Jimmy Smith, Stan Getz, Billie Holiday, and many more.

When studying Burrell’s soloing concepts there are a number of important areas that you can explore, and two of the most characteristic of his playing will be covered in this lesson, blues lines and major key ii V Is.

By studying these licks and applying them to your own jazz guitar solos, you will be able to insert a bit of the blues and bebop vocabulary that has made Burrell a favorite among jazz guitarists.

Here is a fun and classic-sounding Kenny Burrell lick that is based on the Eb major pentatonic scale, used over an Eb7 chord.

Here you are using the Eb minor blues scale to solo over an Eb7 chord in a style very reminiscent of Kenny’s ‘60s recordings.

This classic sounding Burrell blues line over an F7 chord uses the F minor pentatonic scale for the whole line.

Lines like this, simple yet great sounding phrases, are what launched Kenny Burrell to worldwide success back at the start of his career. While they are easy to play, they are deceptively tricky to nail in a solo at the same level as Burrell.

When working on this line, and other “plain” blues lines built from the pentatonic or blues scale, make sure to go and listen to Kenny’s playing and try to imitate his tone, attack, and feel in order to get the same level of intensity as Burrell does in his solos.

In this lick, you will see a favorite rhythm of Kenny’s that you can study and bring into your own playing.

Playing a 16th note followed by a dotted 8th note, rather than two 8th notes as most players will do, is something that Kenny used a lot in his soloing ideas.

Another characteristic of Kenny Burrell’s playing are his slippery, legato lines when playing in a bluesy style.

You can see and hear that legato style in the lick below, which uses a slide on the way up and on the way down the lick which is played over an F7 chord and uses an F minor pentatonic scale in its construction.

In this blues lick, you can see three 8th-note triplets being used to outline a blues scale lick over an F7 chord.

Again, you can see that the lick is simply a descending blues scale with a resolution to the root, but under Kenny’s fingers, it can sound amazing.

Learning that often less is more is one of the biggest lessons you can learn when studying Kenny Burrell’s solos, and so keep that in mind going forward.

This lick over a II V I chord progression uses a common bebop technique that is found in many of Burrell’s classic solos, the enclosure.

This is a great line to study as it uses two variations of the enclosure technique:

As you take this idea further in your playing, try applying both enclosure variations to various notes of any arpeggio or scale that you are using in your solos in order to hear how this concept can spice up any melodic line you are playing.

In this ii V I line, you can see Kenny Burrell using a b13 interval to create tension over the C7 chord during the V7 section of the lick.

To take this idea further:

Play the tonic melodic minor over the V7 chord in any ii V I progression.

Example: play C melodic minor over G7 in a ii V I in C major.

Adding a triplet in this fashion is a great way to bring a bebop rhythm and melodic sound to your playing.

In the next lick, we will look at a Kenny Burrell chord phrase over a short ii V I progression in the key of F major.

Here, you will see a common substitution that Kenny and other jazz guitarists use, the II7alt chord over the iim7 chord.

When you play II7 to V7 you are creating a V7/V7 to V7 progression, or a very short dominant cycle substitution.

As you take this idea into your practice routine, try playing II7 chord over iim7 chords in a ii V I progression to get an idea of how a V7/V to V7 sub sounds in your own phrases.

The next lick is a convenient way to change position on the fretboard.

This last II V I lick starts with a G pentatonic scale, advances to a Dm9 arpeggio and resolves in the 3 of Cmaj7.

When learning how to play in the style of Kenny Burrell, one of the key elements to explore is mixing chords and single-lines during each phrase of an improvised chorus.

To help you get that cool-sounding Kenny Burrell chord/single-note sound in your jazz guitar soloing ideas, this section will explore 2 sample solos.

This section will explore a sample solo written out of an A minor blues chord progression that is inspired by Kenny’s playing on Midnight Blue and Chitlins Con Carne.

The single notes in the solo are all based on the A minor blues scale, and the chords used are typical, three-note shapes that many jazz guitarists use in this type of soloing/comping situation, including Kenny Burrell.

So, grab your axe and let’s dig into some smooth sounding cool jazz in the style of Kenny Burrell.

In this section, you will learn a solo over an F jazz blues progression.

Learning a solo from memory is a great way to digest the material in that improvisation, but there are also other exercises that you can use to continue your study of this material in the woodshed.

Here are 3 ways that you can continue your study of this Kenny Burrell blues solo as you dig deeper into the concepts in this solo in the practice room.

1. Play the solo with a backing track over the first chorus, during the second chorus you improvise the single lines but keep the chords as is. Continue this alteration throughout the backing track.

2. Write out your own Kenny Burrell-inspired solo over a blues progression, using the blues scale for the single notes, and small, three-note chords for the comping sections of the solo.

3. Practice singing an improvised single-line where you see the single-notes in the solo above, then comp the chords on the guitar where they land. This is a great way to connect your ears and voice to your fretboard while working on a minor blues solo at the same time.