Grant Green was one of the finest soloists to ever play jazz guitar. His playing was bluesy, full of bebop vocabulary, and swung hard no matter what situation he was in. Grant Green was a master jazz guitarist of the highest level, and it is definitely a good idea to spend some time learning Grant Green licks in your jazz guitar practice routine. 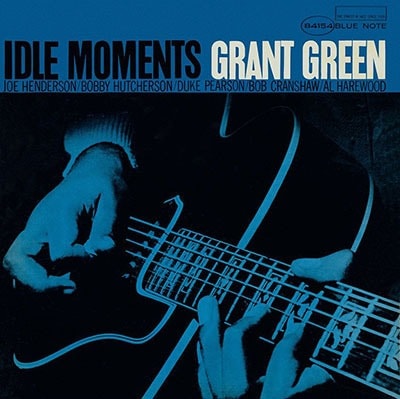 Known as a bluesy player (and later on, the father of modern funk), Grant Green was also a talented bebop soloist who had a strong handle on bebop vocabulary and substitutions.

In this lesson, you will study Grant Green’s guitar playing style. You will learn several Grant Green licks, but beyond the licks, you’ll learn the building blocks for each phrase so that you know how to create your own Grant Green-sounding licks.

If you are looking to get some classic blues licks under your fingers, expand your bebop vocabulary, and work on your swing all at the same time, then Grant Green is the man to study.

Idle moments is the most famous tune on Grant Green’s album Idle Moments, released in 1965. The song is written by piano player and Blue Note producer Duke Pearson.

In this section, you will learn the theme of Idle moments, which is a lot of fun to play. 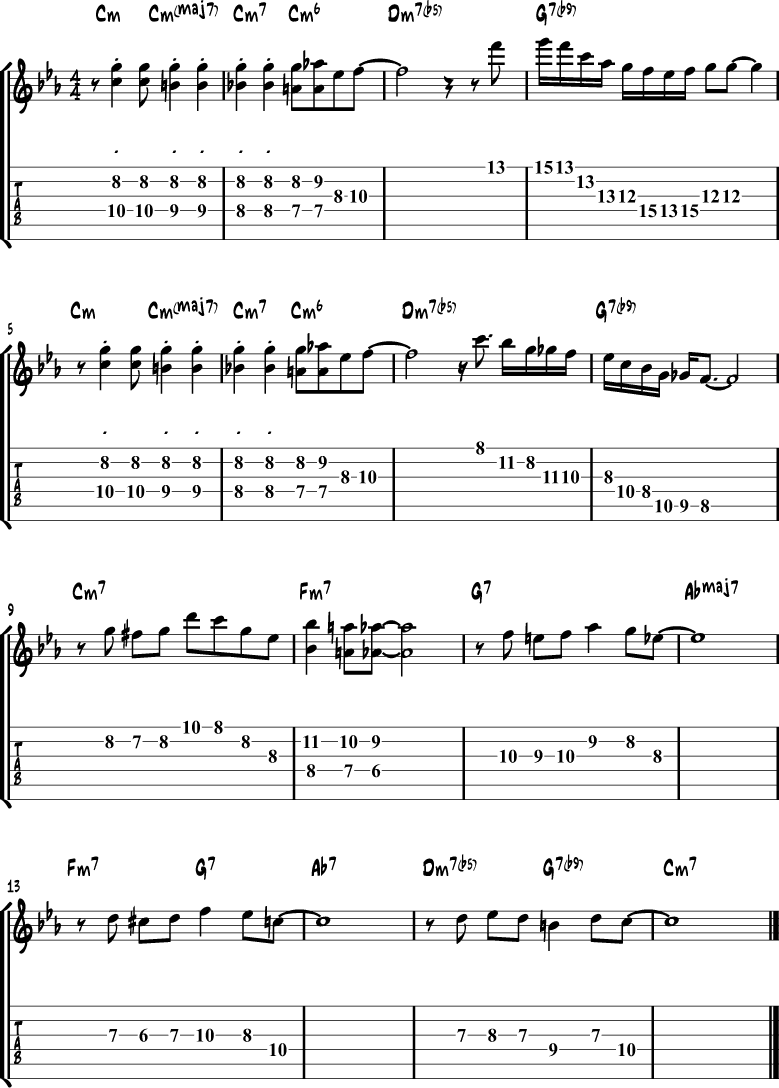 The next lick uses the G melodic minor scale over Gm7 in bar one, implying a GmMaj7 sound.

Applying the melodic minor scale to the iim7 chord is a characteristic of Grant’s playing, and it can be heard further during his solo over So What, where he uses melodic minor over large portions of that tune.

The next ii V I lick uses a few chord substitutions to create a focus on the iim7 chord. In this case by playing Gm7-D7b9-Gm7, rather than outlining the written changes.

This type of substitution, playing a V7b9/iim7 in the middle of a ii V I, is something Grant Green loved to do and it’s a great way to expand your ii V I vocabulary.

This lick uses a quick turnaround substitution over the last two bars of the phrase.

Rather than just playing over the Fmaj7 chord that’s in the progression, Grant would like to use turnarounds to create more interest over a static chord.

In this case, you can see the Imaj7-bIII-bVI-bII-Imaj7 turnaround being used. This turnaround progression is otherwise known as the Ladybird turnaround since it is the last two bars of the Tadd Dameron tune Ladybird.

This is a pretty straight-forward dominant 7 lick in the style of Grant Green.

Here are two items worth looking at further in your practicing:

Here is a lick over a ii V that goes to Bb7.

There’s a lot going on in this lick, of which you will learn more about below.

Here are the concepts used in this line that you can learn, practice, and expand upon in your soloing.

The first concept in this lick has Grant Green using an Am7b5 arpeggio over a Cm7 chord.

When doing so, he creates a Cm6 sound in his line.

Here’s how that looks and sounds:

You can also play an Ebmaj7 arpeggio over a Cm7 chord, creating the intervals b3-5-b7-9.

As a rule, you can play a maj7 arpeggio from the b3 of any m7 chord to produce a rootless m9 sound.

Here’s how that concept looks and sounds so you can start to take it onto the guitar.

The altered scale is found in the solos of every great jazz guitarist, including Grant Green.

When used over 7th chords, the altered scale highlights the b9,#9,b5, and #5 intervals. Because of this, the scale creates a lot of tension that you have to address in your solos.

Here are two fingerings for the altered scale to get you started with this important sound on the guitar. 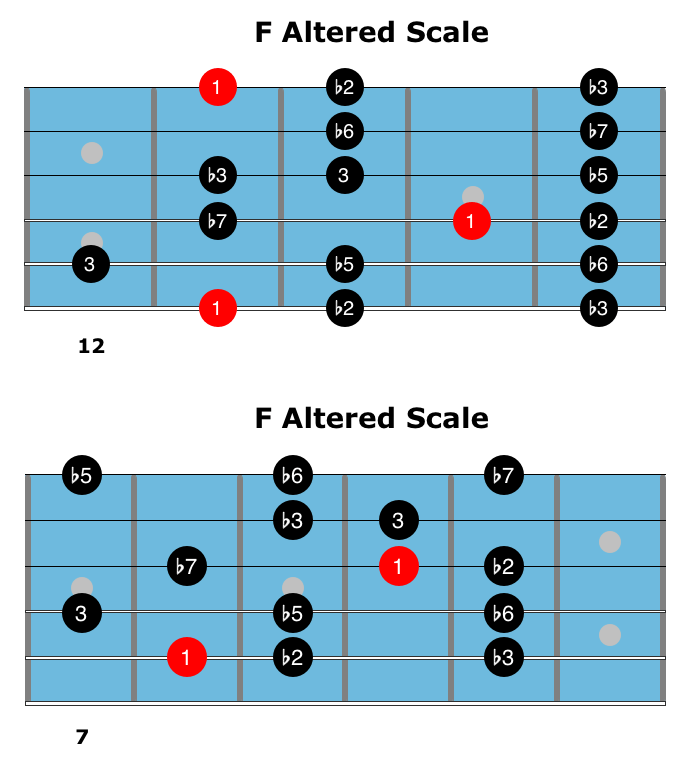 You also see a Cm triad over F7 in the line, which outlines the 5-b7-9 intervals of the F7 chord.

As a rule, you can play a minor triad from the 5th of any 7th chord.

Here’s how that looks and sounds:

Approach notes are chromatic notes that lead by half step into diatonic notes.

Most often they are used below diatonic notes, but you can also use them above.

In this lick, you see this as the B-C notes in the final bar.

Here’s how an approach note below looks like on paper:

The last concept is the lower neighbor tone, which you can see as LN in the guitar tabs below.

So, C-B-C, with the B being the lower neighbor tone.

Here’s how that looks on paper:

To take this lick further, here’s a jazz blues solo that uses typical Grant Green lines, as well as the exact lick in the final four bars.

Learn the solo as is, then begin to integrate these ideas into your soloing vocabulary from there.

In this section, you will focus on Grant Green’s dominant 7th concepts.

You’ll zoom in on three main ideas in this lesson. By working on V7alt lines in major and minor keys, as well as the dominant bebop scale, you’ll get a glimpse into the playing style of one of jazz’s greatest guitarists.

Check these lines out, work the concepts behind them further in your playing, and when ready, learn the sample solo at the end of the section.

To begin your study of Grant Green dominant chord concepts, you will look at how Grant added altered notes to major key V7 chords.

Normally you think of adding altered notes (b9, #9, …) to minor key V7 chords, but you can use them in major keys as well.

Here are two examples of Grant using V7alt chords to create tension and resolution in his major key ii V I soloing lines.

The first line uses the b9 and #9 over the V7 chord in a ii V I progression in Eb major.

Notice how the altered notes are then resolved to the root note of the underlying chord. As the root is a very strong chord tone (the strongest in fact), this line has a strong resolution.

This allows for the altered notes to create tension and resolution, rather than just tension, which can cause your lines to sound out of place without that resolution.

In this second major ii V I line, again the b9 and #9 are used over the V7 chord to create tension. These notes are resolved to the note Bb, the 5th of Ebmaj7.

Alongside the altered notes, there’s a raised 7th interval over the Fm7 chord, creating a melodic minor sound over this chord.

Another way that Grant liked to spice up his dominant 7th lines is to use the dominant bebop scale over that chord.

The dominant bebop scale is a Mixolydian scale with an added 7th note.

In this first bebop scale phrase, the Bb dominant bebop scale is used in bar one, in anticipation of the Bb7 in bar two of the phrase.

Notice that the major 7 interval (A) is placed on the 4th beat of the bar.

As long as you resolve the passing note in a bebop scale you can place it anywhere in the bar you please. But, if you don’t resolve that note, either down to the b7 or up to the root, it’ll sound out of place no matter where you use it in your line.

The next bebop line again uses the Bb dominant bebop scale in bar one of a ii V I, where Grant is thinking V7-V7-I.

You’ll notice the A (the bebop note) accented on beat two of the phrase, before being resolved into beat three on the Ab.

In this section, you will look at two ways to bring altered notes into your V7 lines:

One of Grant’s favorite ways to color V7 chords in a minor key is with a 3 to b9 arpeggio, which you can see in the line below.

By playing Bdim7 over G7alt, Grant highlights the 3, 5, b7, and b9 intervals of the underlying chord.

When soloing over dominant chords, you can always play a dim7 arpeggio from the 3rd of that dominant chord to create a b9 arpeggio.

Notice that here Grant resolves that b9 into the root and down to the b3 of Cm7 (Eb).

The next minor V7alt lick uses the b9, #9, and #4 to create tension over that bar in the phrase, before resolving that tension over Cm7. Starting a V7alt line with a b9-#9-b9 triplet is a common way to add those tension notes to your lines.

From there, the C# (#4) is used as a lower neighbor tone, resolving up to the D (5) of the underlying chord.

In this Solar solo, you’ll use most of the previous lines to create a one-chorus solo etude that you can learn and work into your own playing.

Notice the double-time lick in the last phrase, which is a lick you’ve already learned, though this time played twice as fast to fit into the space given to those chords.

When working on fast licks, such as 16th-note phrases, you can often just take a normal lick and play it twice as fast. This approach is being used here to squeeze that lick into two bars, rather than four bars.