Pat Martino is one of the greatest players to ever pick up the guitar, and studying his material may seem like a daunting thing to tackle. But, by breaking down his solos into phrases, analyzing those phrases, and taking the underlying concepts to your own playing, you will be able to get that legendary Pat vibe in your solos.

Pat Martino emerged as a jazz guitarist in the sixties, releasing his first album El Hombre in 1967.

He made a remarkable comeback at the beginning of the eighties. After undergoing brain surgery he had complete amnesia and forgot how to play guitar. It took him years to recover and get back to his old form, partly by listening to his old records. The first record he released after the post-amnesia period was The Return.

Sunny, a song written by Bobby Hebb in 1963, is one of the most performed and recorded pop songs. It was written as a tribute to John F. Kennedy, but also to Bobby Hebb’s brother, who was killed during a mugging on the same day Kennedy was murdered (November 22, 1963).

Sunny was performed and recorded by hundreds of artists, including Marvin Gaye, Stevie Wonder, James Brown, and Shirley Bassey.

The most legendary Sunny version among jazz guitarists (besides Wes Montgomery’s) is Pat Martino’s recording on his album Live! (1972) because of the amazing solo that spans nearly 5 minutes.

In this section, you will learn 5 licks transcribed from Pat’s solo.

In this first Pat Martino lick, you’ll see a number of quintessential Martino concepts throughout the phrase: 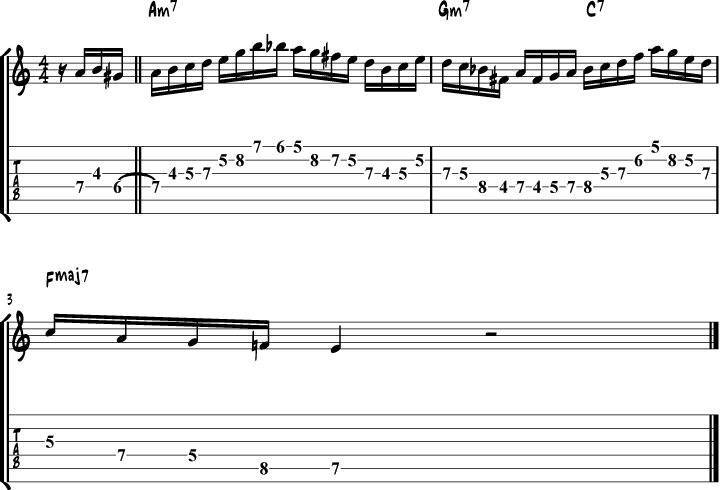 Apart from the bebop influence at the end of this Pat Martino lick, you’ll see a repeated melodic phrase repeated throughout the first five and a half bars of the line.

Repeated a short phrase such as this is not only a characteristic of Martino’s soloing concept, it’s a great way for you to increase the intensity level of your own solos.

Practice taking this melodic pattern, heard in the second half of the Am7 bar at the start of the line, and repeat it when soloing in your practice routine. From there, come up with your own melodic phrase to repeat in your solos.

The key is to use the repeated phrase to build energy, but know when to move on in your lines so that the lick doesn’t become overdone. This is a tough line to walk, but if you can do it then any repeated line such as this becomes a powerful tool in your improvisational tool belt. 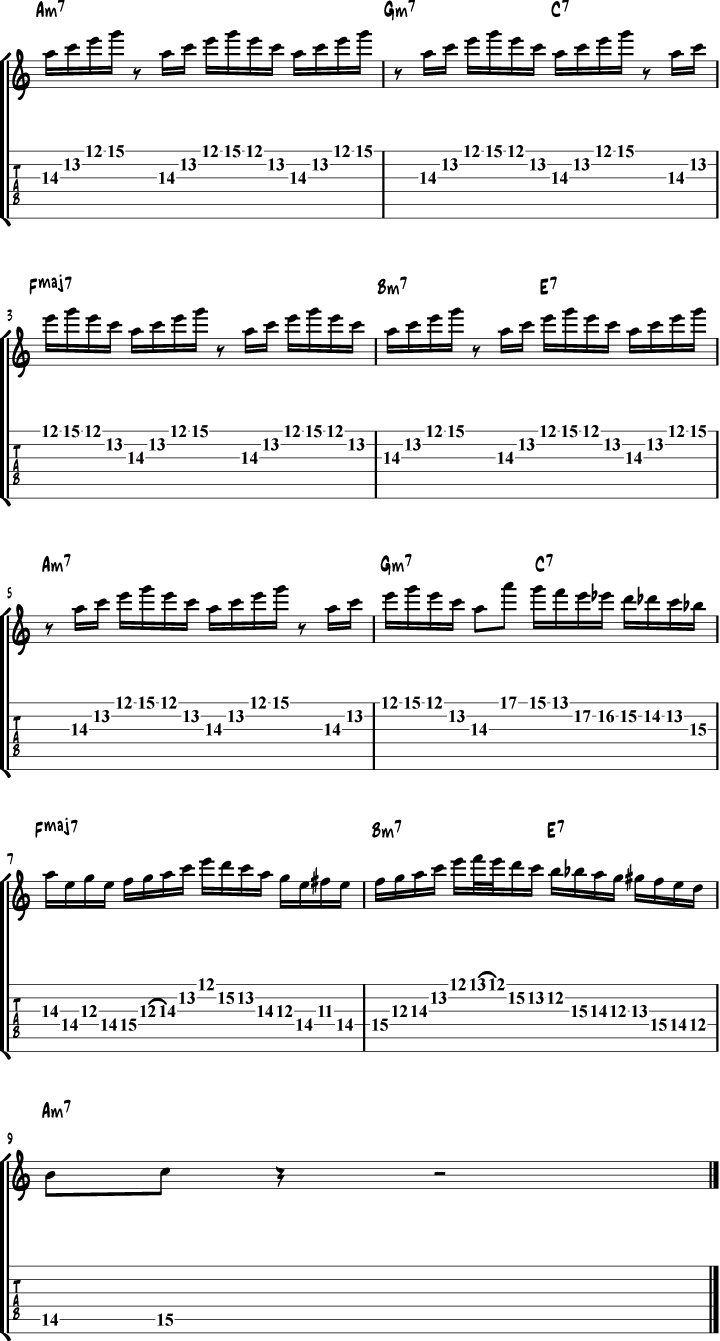 Apart from studying single-notes when digging into Martino’s soloing concepts, you’ll also want to dig into his use of double-stops and chords in his soloing phrases.

You can see two and three-note shapes being used in this line to create energy throughout the phrase.

As well, there is a repeated melodic phrase used in this line, combining two of Martino’s favorite concepts for building energy in his improvised lines.

When working on double stops on your own, you can take them from arpeggios, minor pentatonic scales, or modes in your solos. 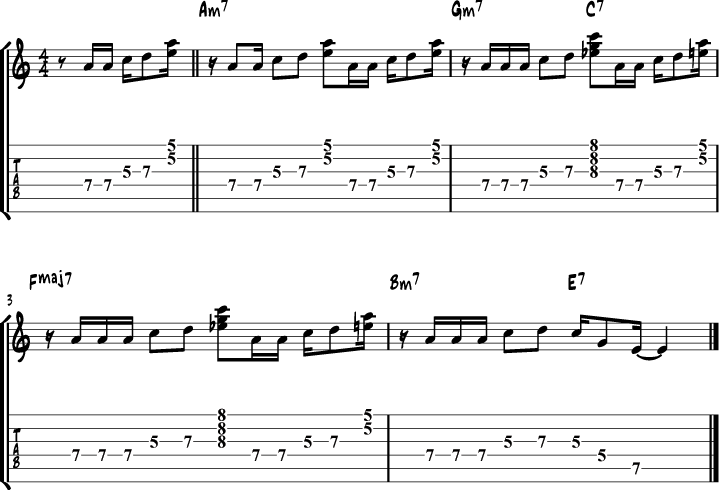 Here’s another repeated Pat Martino lick, though this time the line is not based on arpeggios or pentatonic scales, as you saw in the first two repeated lines in this lesson.

Instead, the line is highly chromatic, running six chromatic notes in a row during the repeated phrase, from F down to C.

When doing so, Martino starts the lick on the 2nd 16th note of the phrase, which also gives it a syncopated feel as you repeat the phrase over a series of measures, as you can hear in the lick below. 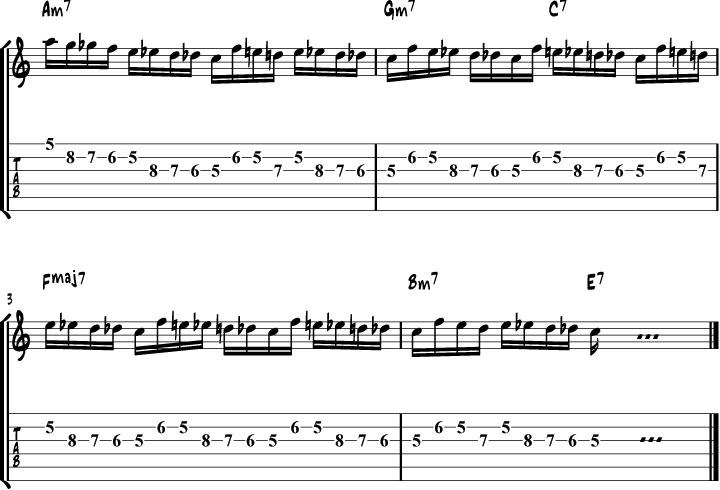 In this lick, you’ll work on a mixture of arpeggios and scale notes as you outline the changes over the tune Sunny.

You’ll notice diatonic arpeggios being used in the following ways:

As you can see, there are some arpeggios that outline the direct chord that Pat’s soloing over, while others are subs that come from the related key center.

Also, you’ll see a number of chromatic passing notes, such as the Ab, Eb, and Db notes in the second bar of the line.

Though it’s not always the case, often Pat Martino will play skips (arpeggios) up, followed by steps (scales or chromatic notes) down.

This helps balance the line and keeps the listener guessing as to what’s coming next in the line. 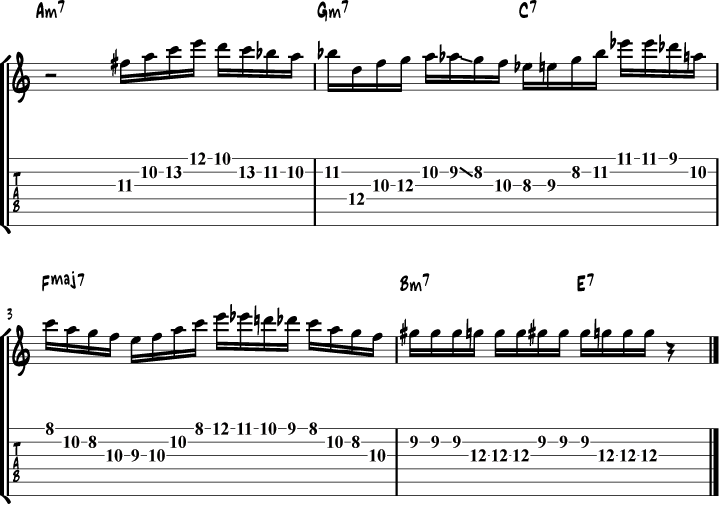 The first lick is a V – I minor key phrase that uses the C harmonic minor scale to outline the b9 and b13 intervals over the G7 chord in the progression.

If you want to take this concept further, try putting on a G7-Cm7 backing track and improvise over those changes using the C harmonic minor scale to build your lines and phrases.

If the second chord would be a major chord, change the last note to an E natural in order to resolve it to a Cmaj7 chord rather than a Cm7 chord.

This lick uses a simple rhythmic idea (a three-note 8th-note pattern) which is repeated to create a syncopated feel throughout the line.

Though it is simple on paper, getting this lick even and repeating is for longer periods can be tough. Go slow, use a metronome, and nail the rhythm for each note in your studies.

Pat used repeated licks to build energy, especially in the drums, and while it may be a cliche now, this is still a classic lick that’s worth adding to your vocabulary.

This minor lick is built around a C major arpeggio, a common substitute for Am7.

Starting maj7 arpeggios on the 7th and moving up the 1-3-5 from there is a commonly used jazz phrase that you can explore further.

There is also an Em7 arpeggio in the last four notes of the phrase, which highlights the 5-b7-9-11 of the underlying Am7 chord. This is another arpeggio concept you can take from this lick and work it in other keys and over other chords.

This Pat Martino Lick is also built around a C major arpeggio over an Am7 chord.

The opening four notes (7-1-3-5) are a common arpeggio pattern used by Pat and other jazz legends.

This lick is a real classic that is inspired by the material Pat presented in his jazz guitar book Linear Expressions. If you are interested in Pat’s playing, then owning and studying the soloing concepts in this book is essential.