One of the most successful, and sometimes controversial, jazz guitarists of all time is George Benson. While he began his career as a pure jazz guitarist, taking up the lineage of Charlie Christian and Wes Montgomery, Benson later branched off into the pop world where he achieved worldwide success with albums such as Breezin’. 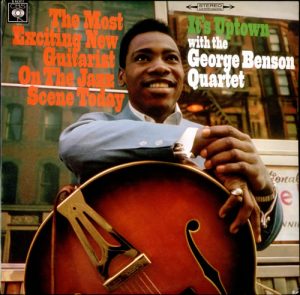 George Benson is one of the greatest jazz guitarists who ever picked up the instrument. A master of blistering lines, octave phrases, chord soloing and of course scat singing, Benson seems to have it all when it comes to his ability to play jazz standards and pop repertoire in a jazzy vibe.

Though his pop work brought him fame, it did alienate some of his fans from the earlier, more bebop oriented recordings. Nevertheless, Benson has remained at the top of the jazz guitar world for over 4 decades now, and with a recent string of new releases, there’s no slowing down for this jazz guitar legend.

In this lesson, you will learn a number of Benson’s favorite soloing concepts. You will learn to play, and apply 19 different George Benson jazz guitar licks to a variety of chord progressions and musical situations.

Recommended listening: Beyond the Blue Horizon

The following footage comes from a 1975 television tribute to John Hammond. In the PBS show, Benny Goodman (66 at the time) reunites with musicians he’d worked with over the years such as bass player Milt Hinton, drummer Jo Jones, and George Benson, substituting and honoring the playing of Charlie Christian.

In this video, the band is playing Seven Come Eleven, a famous composition by Goodman and Charlie Christian from 1939.

Have a look at the video, Benson’s comping, soloing and interplay with Goodman is phenomenal.

Funny anecdote: at the end of Goodman’s first chorus [1:33 in the video], he signals piano player Teddy Wilson to take a solo, but George Benson takes it away instead…

I did a transcription of the great lick that starts at 2:10 in the video: 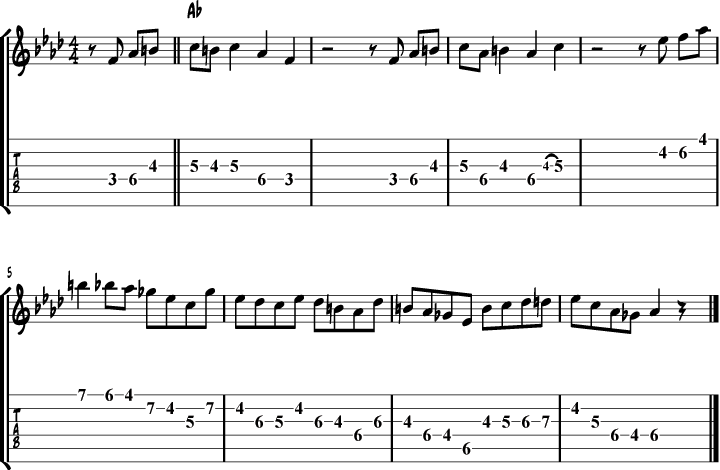 In this lick over Ab, George Benson switches between an Ab6 arpeggio and the Ab minor pentatonic scale:

In this blues-influenced example, bends are used, something that’s not very common in jazz music.

Most of the phrase is in the D minor blues scale, except for bar 5, where an Am9 arpeggio is used.

Here’s another phrase that brings out the 9-sound over D minor.

The first 2 bars are a combination of the D Dorian mode and chromatic notes, targetting the 9 in several places.

Bar 3 starts with an Abmaj7#5 arpeggio and bar 4 has a major 3rd as a passing tone. Both sound a bit atonal, which is nice to keep long lines over one chord interesting.

This next example mixes the A minor blues scale with chromatic notes.

There is a lot of chromatism around the A minor blues scale going on in this next phrase over A minor 7.

Bar 5 ends with a typical jazz guitar embellishment. The target-note is the A on the 1st string.

The phrase ends with an Am9 voicing in bar 9.

This one uses the A minor blues scale, which is a common scale choice for George when soloing over m7 chords.

Though it is a simple choice, masters such as Benson, Grant Green, Wes Montgomery, and others were all experts at creating hip-sounding lines using this commonly studied and applied guitar scale.

There are a lot of blues influences in Benson’s playing such as the blues scale and double stops (playing 2 notes at once).

Here’s an example with double stops.

The first lick starts with a Cmaj7#5 arpeggio over E7b13 and continues with the A melodic minor scale. This arpeggios highlights the b13 of the E7 chord, and is a solid way of outlining altered chords without simply playing the altered scale in your lines.

The first bar of the next lick uses a Dm7b5 arpeggio, which gives an altered type of sound over E7:

In the second bar, George plays an Abmaj7 arpeggio.

The use of a major 7 on a dominant chord is a bit unusual but sounds ok here because it is part of a series of arpeggios that are used to build tension.

After the Abmaj7 arpeggio follows an Ab augmented triad (3, b13 and 1), which then resolves to the 9 of Am7.

The video is an extract of Louis Panassié’s L’aventure du Jazz (The Adventure of Jazz). A young George Benson improvises a tune loosely based on bass player Ben Tucker’s song Comin’ Home Baby (1961).

Here is the transcription of the theme, there are a few spicy licks in there: 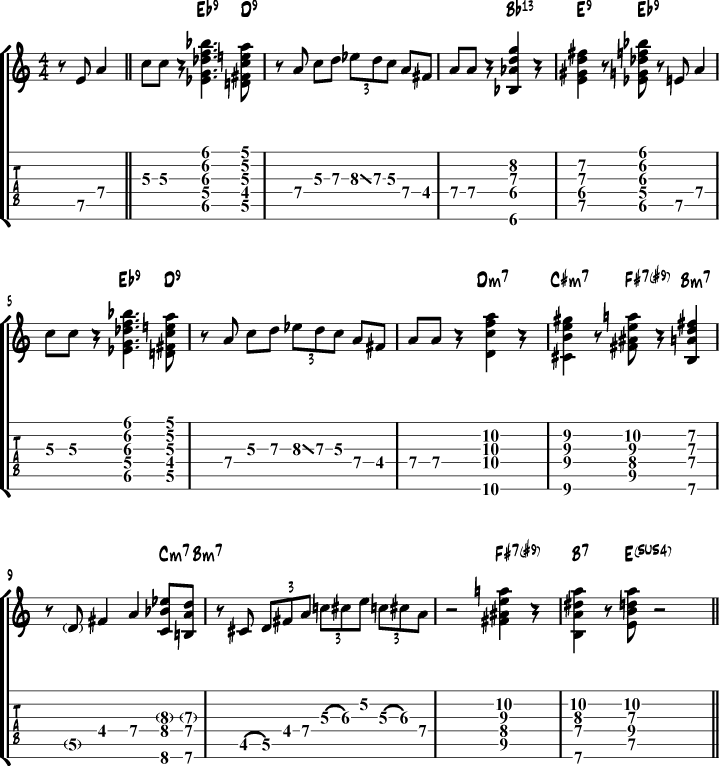 The Fm7 chord here is substituted by Abmaj7 with a bit of chromatism. When playing Abmaj7 over Fm7, you are outlining the b3-5-b7-9 of that chord, so it’s like playing a rootless Fm9 chord.

Another cool 251 lick in the key of C major.

The next ii V I lick in the style of George Benson uses the G dominant bebop scale (in the second bar).

Though it’s a simple device, adding a passing tone to the Mixolydian scale, the dominant bebop scale is a staple of Benson’s soloing ideas.

The next Benson lick we’ll explore features a common concept that you can take out of the phrase and expand upon in the practice room.

In the first two bars of the lick, you’ll notice a four-note pattern labeled “Lick”. This phrase is a commonly used device that Benson, and many other jazz guitarists, use to add chromaticism to their soloing lines.

The lick works as such: when you have two notes a half-step apart (such as F and E in the example below), you can play the higher note (F), then two chromatic notes below the second note (D and D#), that lead into the lower of the two first notes (E).

Here is an example of that lick used over a G7 scale.

In the G Mixolydian scale, you have two places where there are notes a half-step apart (F-E and C-B). I have added in the bebop lick to both of these locations in the scale.

Here’s how that looks on the guitar neck. The blue-colored notes are the added chromatic notes.

Another concept is Benson’s use of diatonic triads.

In bar 3 of the following example, you see three ascending triads (Em-F-G) being played over a Cmaj7 chord. All three of these triads come from the C major scale.

I have written out all of the diatonic triads in C major for you to check out and use to create your own lines in a similar style.

Once you have worked the above concepts in 12 keys around the fretboard, you can check out the lick itself.

Start slow and work it with a metronome, to begin with. Then, once it’s comfortable on its own, you can practice soloing over a tune and adding this lick to your ideas whenever you encounter a ii V I progression.

Octave displacement is a device that Benson (and Wes Montgomery) uses a lot in his solos.

Octave displacement = when going down a scale, at some point in the line instead of going to the next note down, you play that same note up an octave.

You can see this between the B and Ab and the D and C in bar one, as well as the F and E in bar two.

In both of these situations, the octave jump is used to continue down the scale, but go up to a higher point on the fretboard.

Here is an example of a C major scale using an octave displacement pattern, where the scale jumps up an octave every 5 notes. Try this pattern out in a few keys and at different tempos with your metronome.

While both Benson and Wes use a lot of octave ideas in their jazz guitar solos, Benson takes the concept a bit further by adding in an extra note in between his octave notes, the 4th.

In the following ii V I lick, you can hear how adding in a note a 4th above the lowest note of an octave pattern helps to thicken the sound while maintaining an octave vibe at the same time.

Since this concept is probably new to you, here is a C major scale harmonized with a 4th above the lowest note and the octave on top. Work this pattern out in a few keys around the fretboard, and in different octaves, to get a feel for how this pattern can be used to create your own improvised lines and phrases.

Here is a Benson lick using the octave and 4th concept.

To get a typical Benson sound, you can strum the chords down with your thumb or pick. If you find that hard to nail as far as accuracy is concerned, you can pluck each note with your fingers, or with your pick and fingers.

Though it seems like a simple idea, it’s these little tweaks of common concepts that make Benson such a master of jazz guitar, and it’s a great way to play octaves without sounding like you’re imitating Wes Montgomery or George Benson exactly in your playing.

This lick uses the C minor pentatonic scale, which when applied to the ii V in the progression creates some nice color tones in your lines.

As you can see, this minor pentatonic scale highlights the b13 and #9 of the G7 chord in this progression, which allows you to play altered sounds in your lines, without moving beyond the pentatonic scale shapes you already know.

George Benson knows the classics and you can hear that in his playing. He regularly cites other guitarists that have influenced him, such as Charlie Christian and Wes Montgomery.

An example of a cliche that comes back regularly in his playing is a phrase that is known as “The Lick”. This line can be played over a 2 5 1 in D minor (see below) but also on Dm7, Bbmaj7 or Gm7.