Blue Bossa is a popular bossa nova standard written by Kenny Dorham and made famous by Joe Henderson on his album Page One (1963). It was written after Dorham visited the Rio de Janeiro Jazz Festival in 1961. 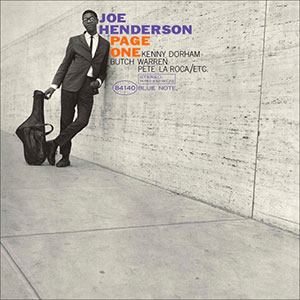 Blue Bossa is a good song for beginners to improvise over chord changes because it is usually played at a medium tempo and has an easy-to-follow harmony (including a modulation). Blue Bossa is often played at jams, so it’s a good idea to add it to your repertoire.

Besides The Girl From Ipanema, Blue Bossa must be the most popular bossa nova song ever.

What You Will Learn in this Blue Bossa Lesson 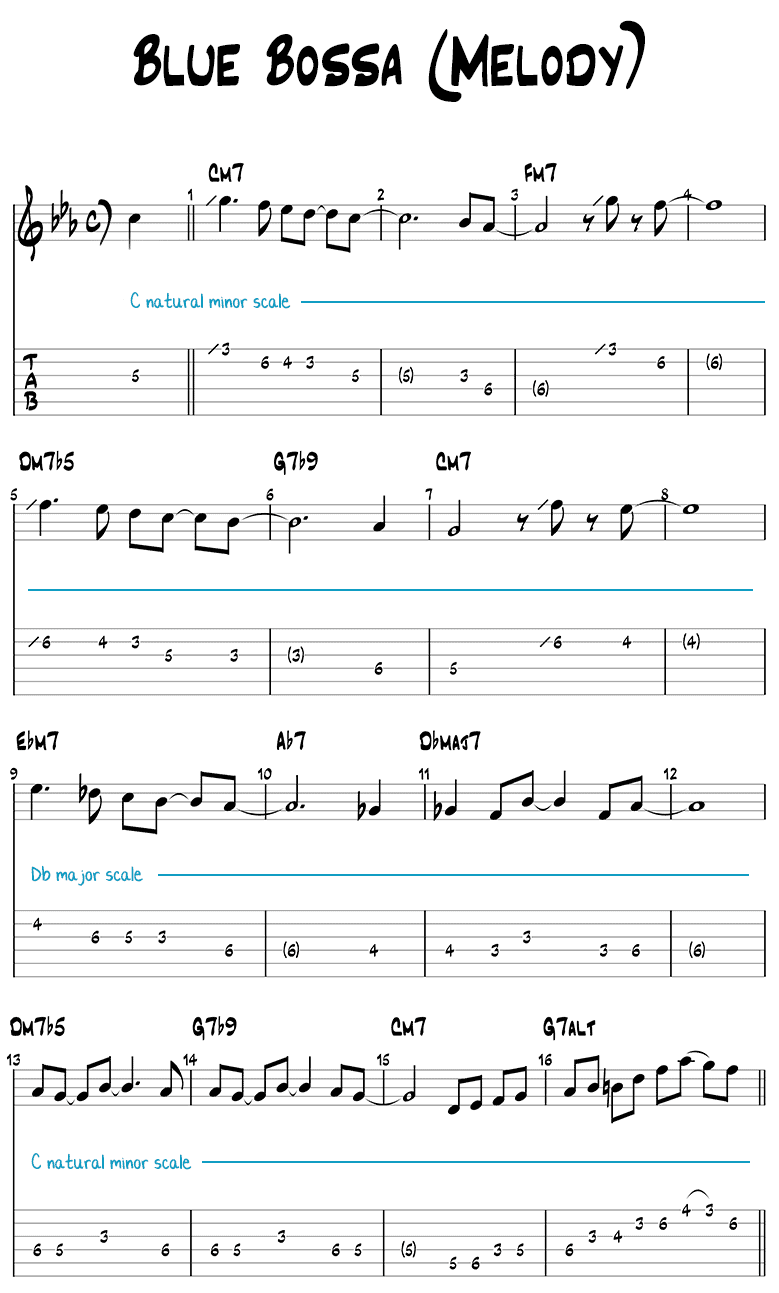 Before we go on to the solo, let’s first have a look at the harmonic structure and the guitar scales you can use over Blue Bossa. 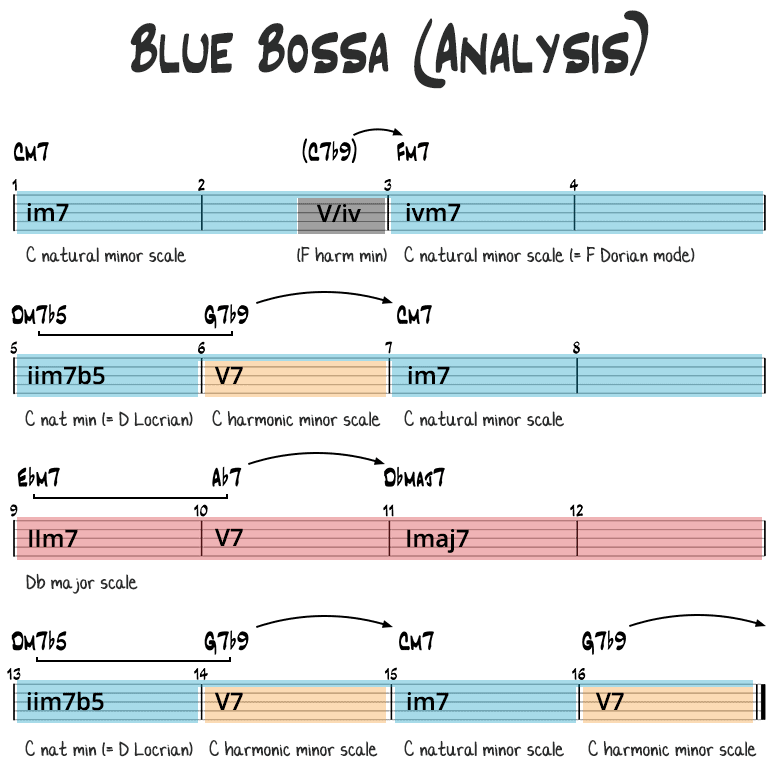 On the blue parts, you use the C natural minor scale, aka the C Aeolian mode.

On the Cm7 chord, you can also play the C Dorian mode.

As an optional variation, you can make bar 2 into a C dominant 7th chord, by playing the F harmonic minor scale.

C7 (in Blue Bossa) is a secondary dominant chord (V/iv) that resolves to Fm7.

The scale of choice to play over C7 is the F harmonic minor scale, also known as the C Phrygian dominant scale or the C Mixolydian b9 b13 scale.

The scale of choice over the dominant chord (G7) is the C harmonic minor scale (= G Phrygian dominant).

As an alternative, you can play the G altered scale over the G7.

This is a regular II V I progression, and you can play the Db major scale (=Db Ionian mode) over it. 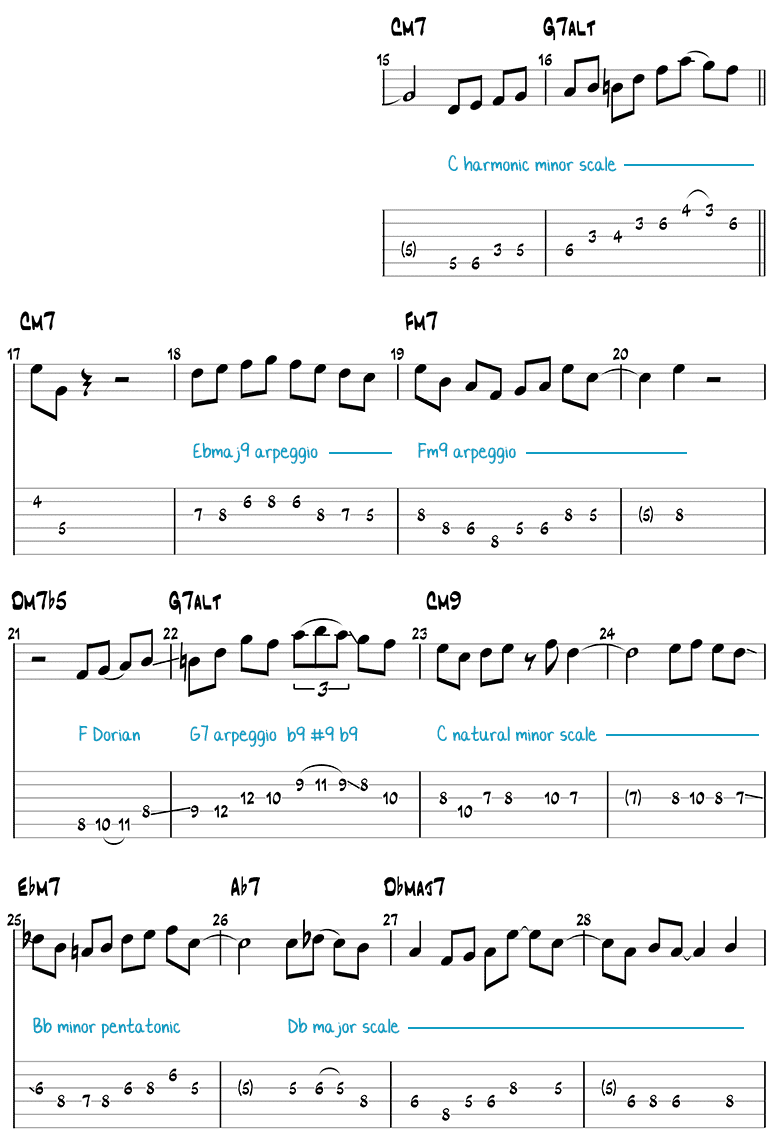 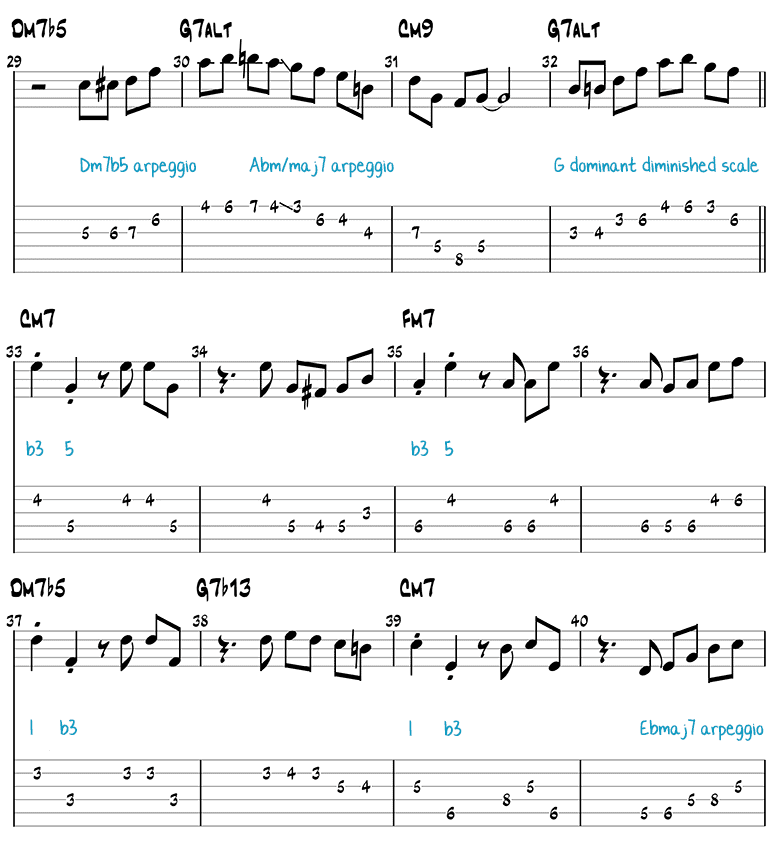 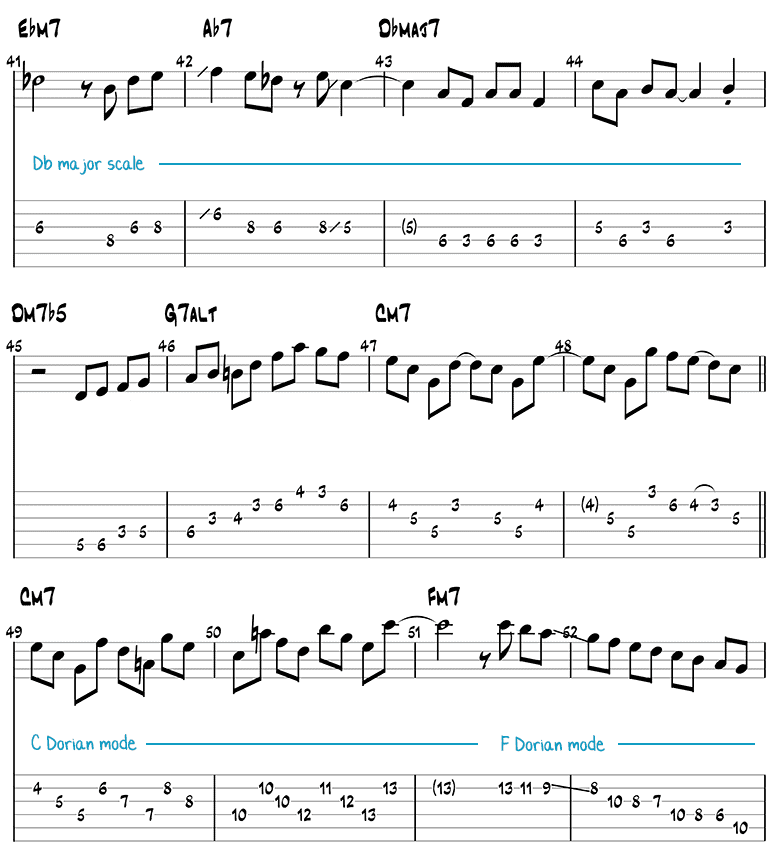 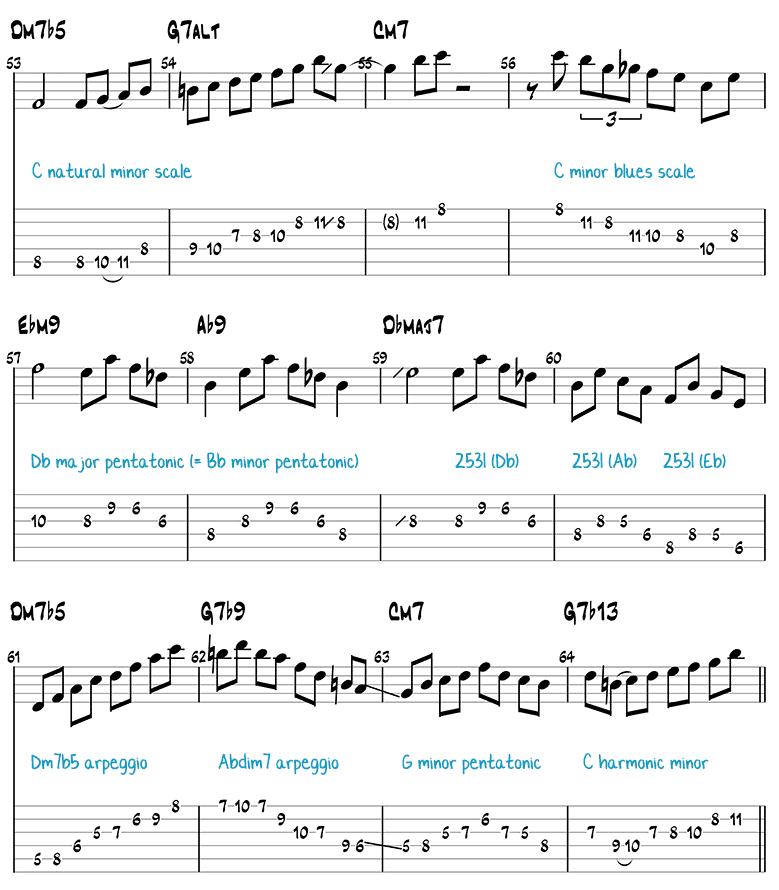 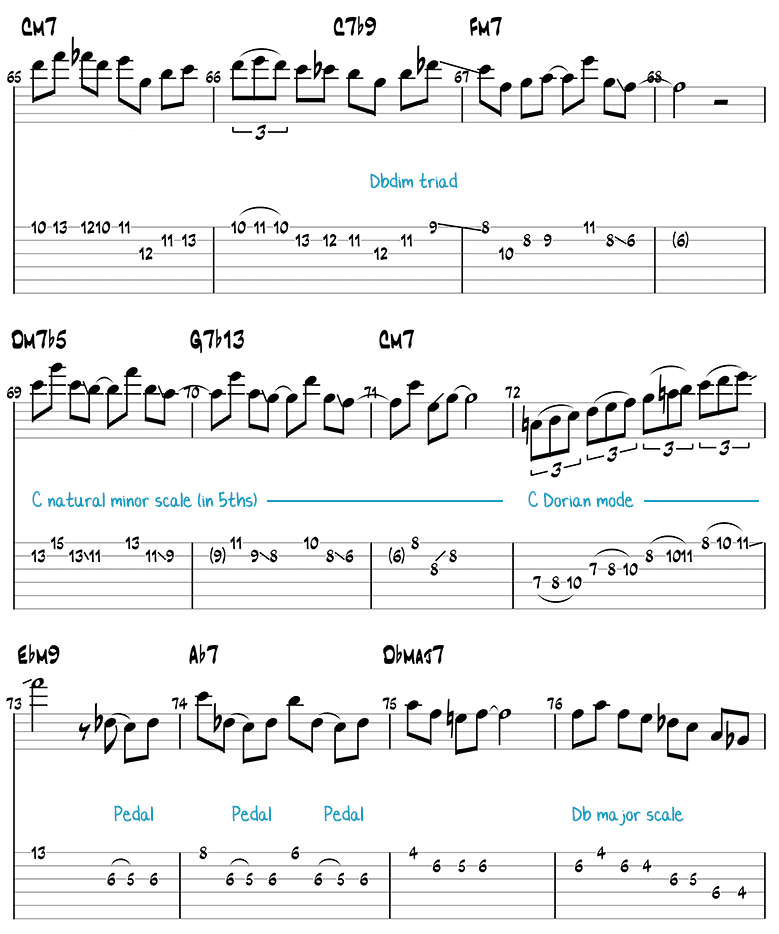 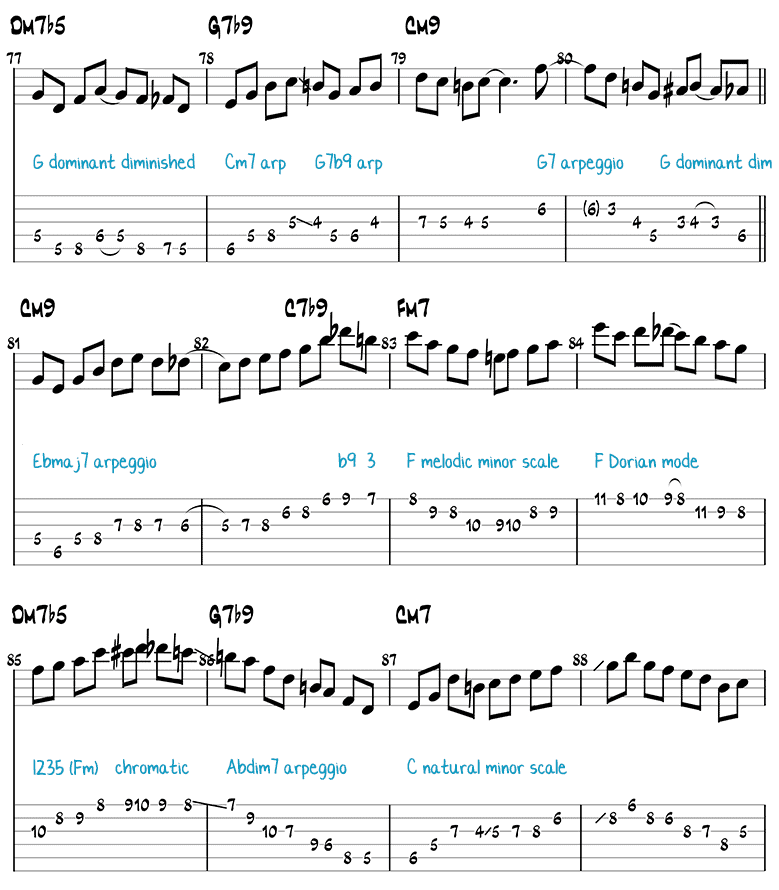 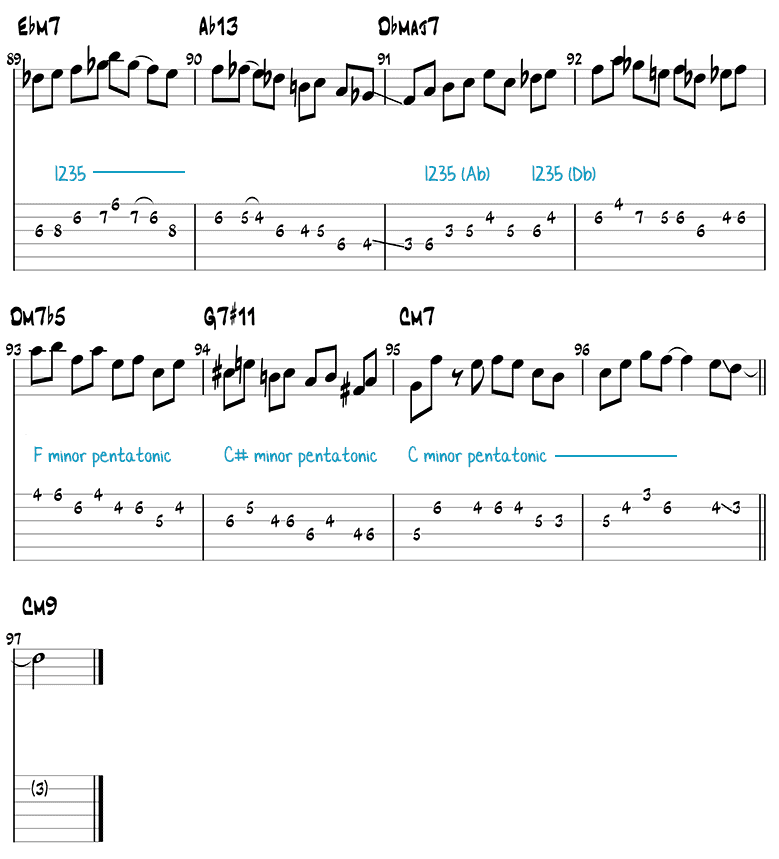 In this version of Blue Bossa, I arranged the melody the way you would play it in a jazz trio by adding chords to the melody.

When you play in a combo without a piano or another guitar player, it’s a good idea to harmonize your melodies. 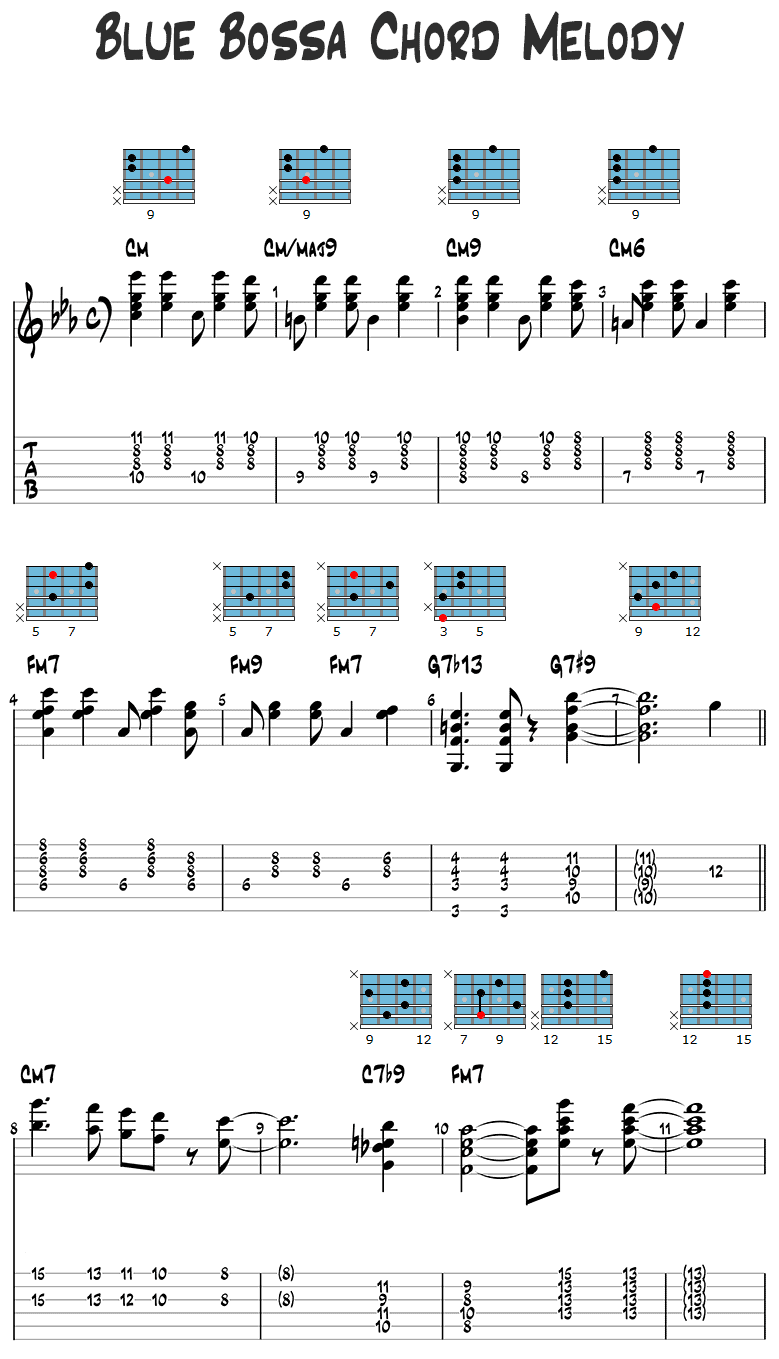 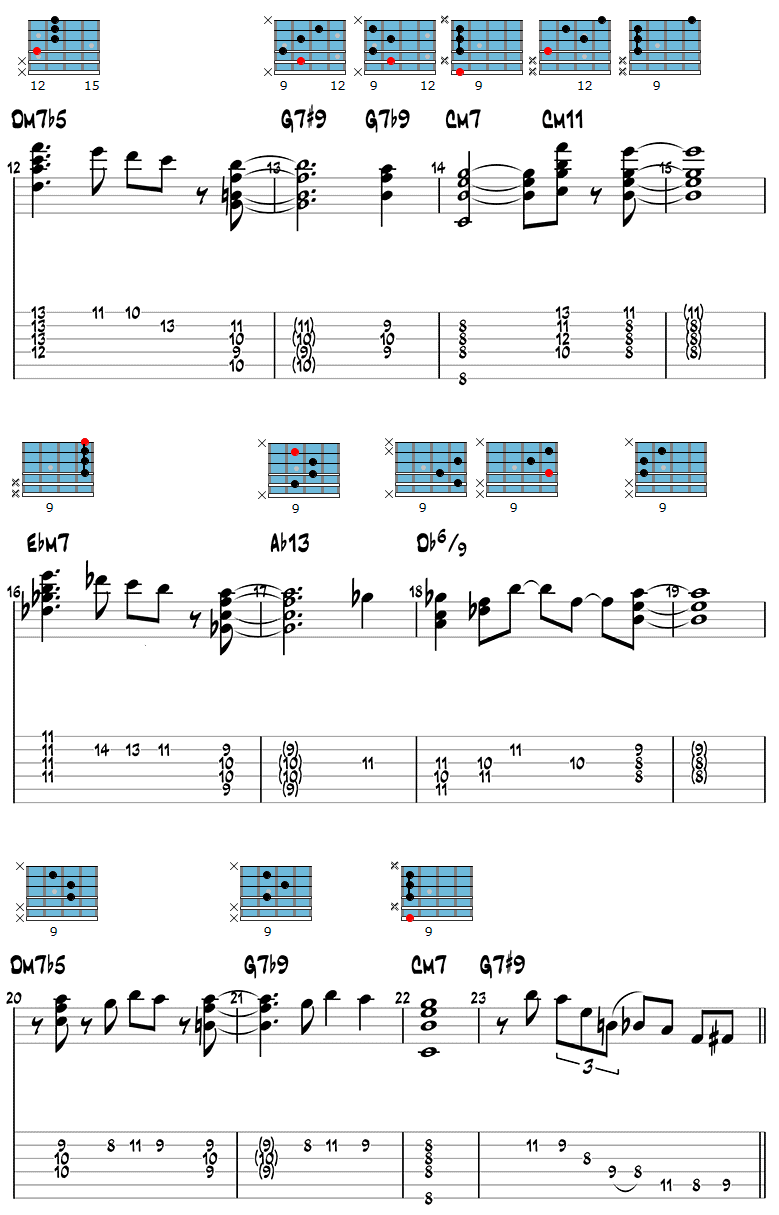 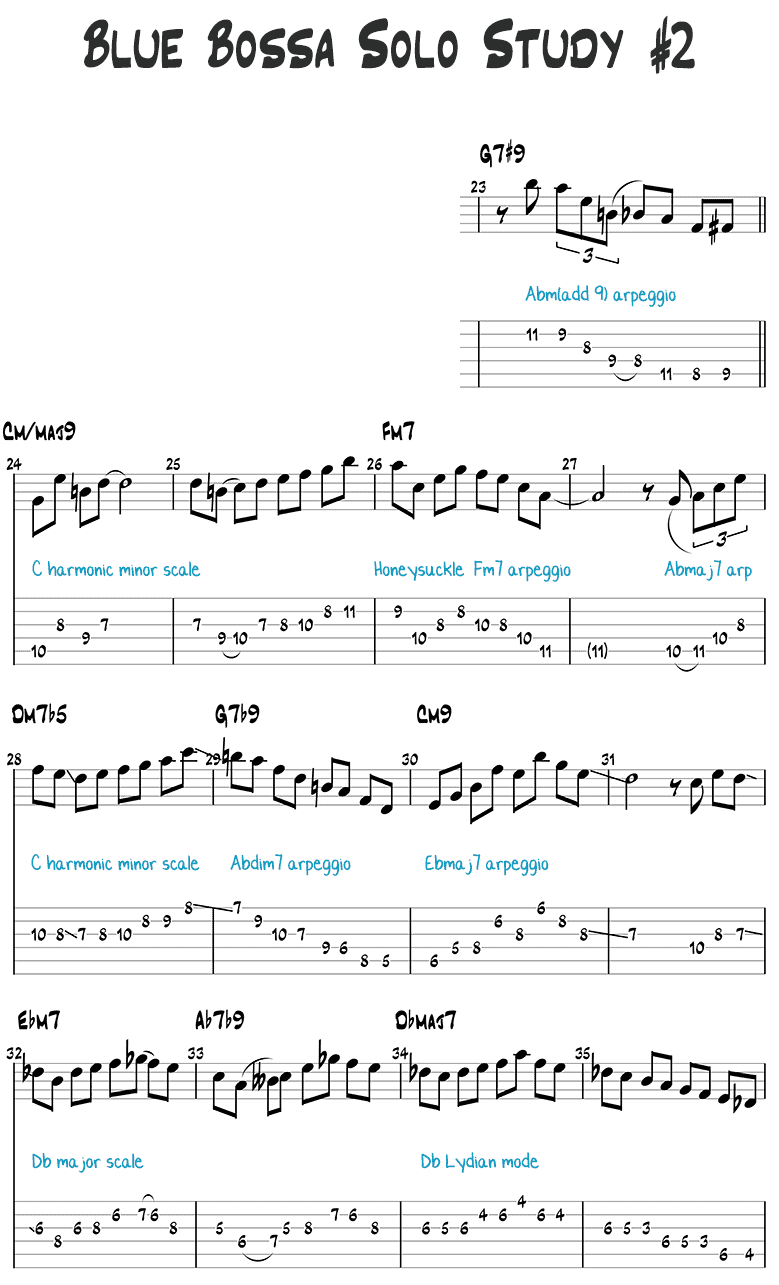 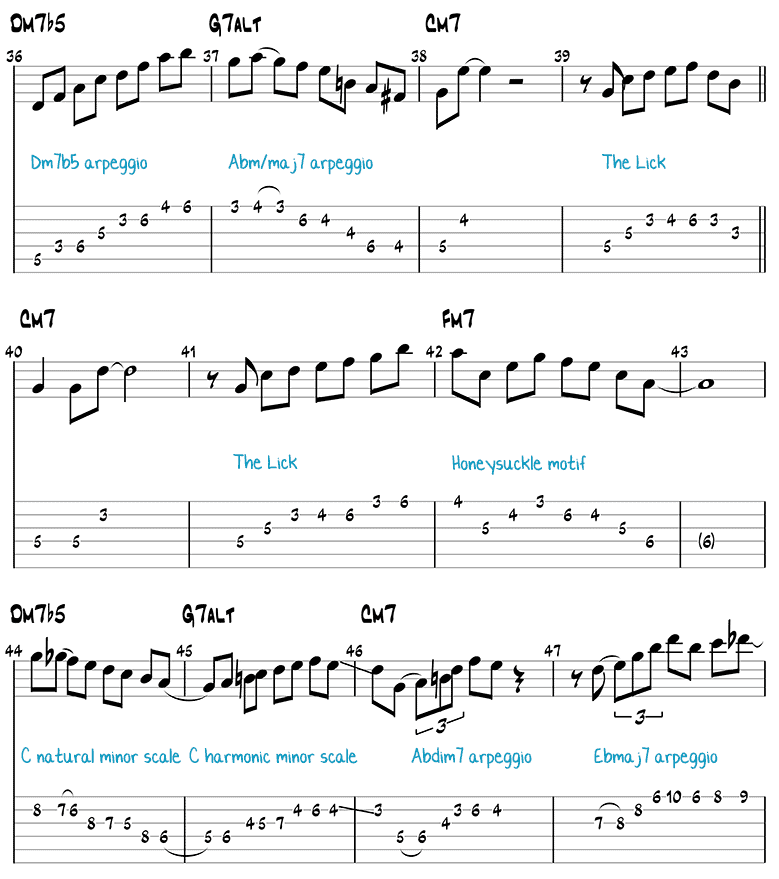 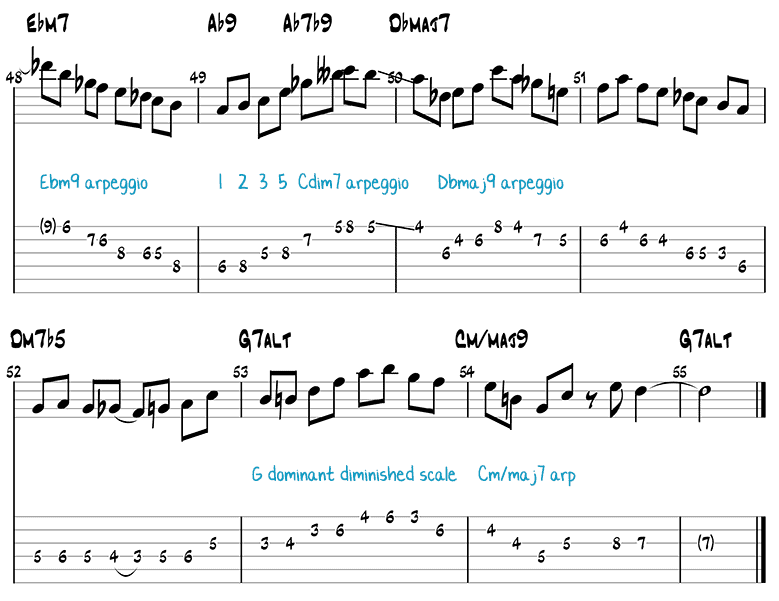 Arpeggios are an important tool for jazz musicians because they enable you to mirror the harmony of a tune in your solo, something that’s harder to achieve with scales.

The best way to learn arpeggios is:

The following arpeggio study over Blue Bossa will help you on your way. I play the arpeggios continuously up and down the strings and stay in one position.

Here’s how you use the study:

These studies are not meant to sound good, but they are a good way to master arpeggios so you can use them in a more creative and musical way in your solos.

Here are the arpeggio shapes used in this study: 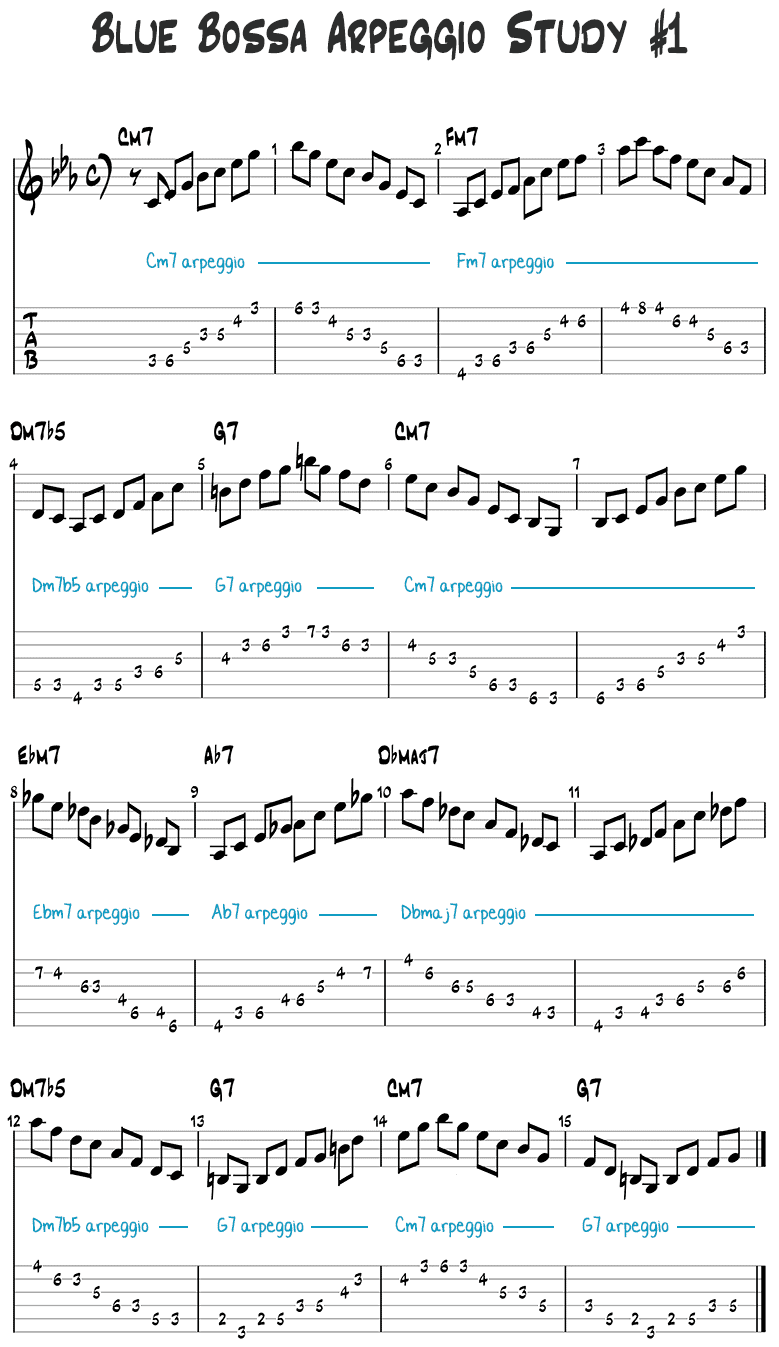 In study 2 we add the first extension to every chord (the 9) by using chord substitutions.

Here’s how this substitution works:

Playing an Em7 arpeggio over Cmaj7 gives you the major 9 sound:

Here are the substitutions for Blue Bossa’s chords:

Dm7b5: here we play the plain chord for now.

One of the most common non-swing rhythms that jazz guitarists explore is the bossa nova groove. While many of us learn to play Brazilian jazz tunes in our practice routine, learning how to play an authentic bossa or samba groove on the guitar can be tricky.

To help you get a handle on how to play an authentic groove over any Brazilian jazz tune you are learning, we’ve put together two chord studies featuring a popular Samba/Bossa groove that you should get under your fingers and apply to your playing.

Here are short descriptions for each of the chord and bossa concepts covered in the chord study below so that you can understand the building blocks of this exercise.

m9 Chords – Whereas jazz guitarists prefer m7 chords for minor sounds, it is very common in Brazilian music to use m9 chords instead. These m9 chords, 1-b3-5-b7-9, have a bit of a “softer” sound than m7 chords and help create the smooth sounding quality that we associate with bossa music.

7b13 Chords – Here, there is a bit of voice leading at play where you are moving from the E note on top of the Dm9 chord for example, to the Eb on top of the G7b13 chord, to the D on top of the Cmaj9 chord. This type of half-step movement on top of chords is commonly found in the playing of many Brazilian guitarists.

Maj9 Chords – This is a softer version of the maj7 chords that many jazz guitarists prefer to use for their Imaj7 and IVmaj7 chord voicings.

m11b5 Chords – Here, you are replacing the 3rd of Dm7b5 with the 11th in a commonly used alternate shape for a m7b5 chord. When adding this chord into your playing, you can play the m11b5 to the m7b5, or vice-versa, in order to create some melodic movement on top of the chord changes.

Bossa Bassline – During the chord study you will notice that the thumb plays bass notes on 1 and 3 of each bar, mostly the root note but sometimes the 5th or a chromatic note can be added in to create movement as well. When playing these bass notes, you should accent the 3rd beat in order to create a more authentic Brazilian feel with this chord study.

Anticipated Chords – You will notice that between bars one and two, and the first and second bars of each two-bar group, the chord in the second bar is played on the & of 4 in the first bar. This anticipated chord movement is common in Brazilian music, and it will be one of the hardest parts of learning this chord study, or any Brazilian tune on the guitar. So, take your time, isolate these moments and work them on their own before going back and trying to work the study as a whole.

Syncopated Accents – As was the case with the accented 3rd beat in the bass notes, you will want to accent the upbeat chords a little in order to create the swing feel that you hear in Brazilian music. You don’t have to play heavy accents, but just making the upbeats a little louder than the downbeats will help get the authentic Brazilian feel you hear on classic recordings.

Here is a similar chord study, but this time on electric guitar, without the alternating bass pattern and some variations added in.

To practice improvising over Blue Bossa, you can use the following “Karaoke-style” backing track video, made with Band in a Box.