In a recent forum post, we asked our readers to name their favorite jazz guitar solo. And, as you might imagine, we got a varied response to that tough question. As readers struggled to pick just one solo that they would rank as their all-time favorite, a short-list of tracks began to emerge that would end up becoming the top 10 best jazz guitar solos laid out below.

You may or may not agree with this list, so feel free to read through and then post your own top 10 list in the comments below.

As well, besides a video of each of the recordings on this list, there is a lick transcribed from each solo for you to check out.

So, without further ado, here they are, the top 10 best jazz guitar solos as chosen by the readers of JGO.

The most popular jazz guitar solos, as chosen by our readers, is Besame Mucho by none other than “The Thumb” himself, Wes Montgomery.

Taking a fresh look at this tune, by playing it in 6/4 rather than the traditional 4/4 time, Wes’ solo is energetic, sophisticated, and full of classic Wes vocabulary.

While this might not be his most famous tune, this solo has one over the hearts of jazz guitarists around the world.

Check out the list below to see if your favorite Wes solo made the top 10. 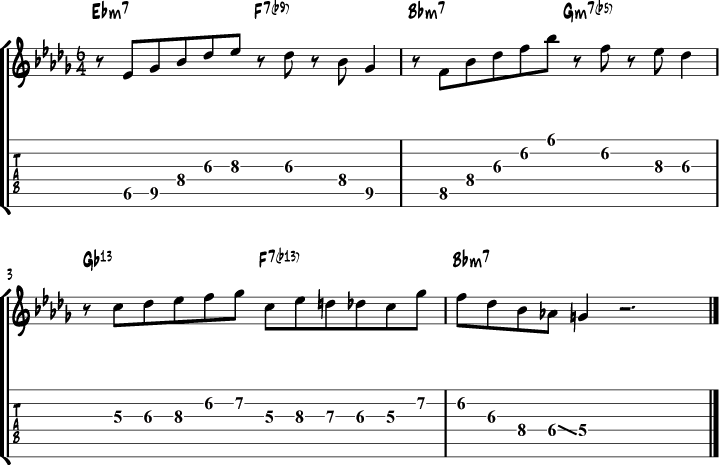 Other popular Wes Montgomery solos (in order of popularity):

Joe’s recording of Django appears on his album, “For Django,” a tribute to the legendary Gypsy jazz guitarist Django Reinhardt.

This is a fiery solo, full of double-time licks, where Joe is on top form during his creative and intense improvisation.

In the transcribed line below, you’ll find a number of idiomatic Passisms that you can study further in your practice routine.

Check out the list below to see if any of your favorite Joe Pass solos made the top 4 as suggested by our readers. 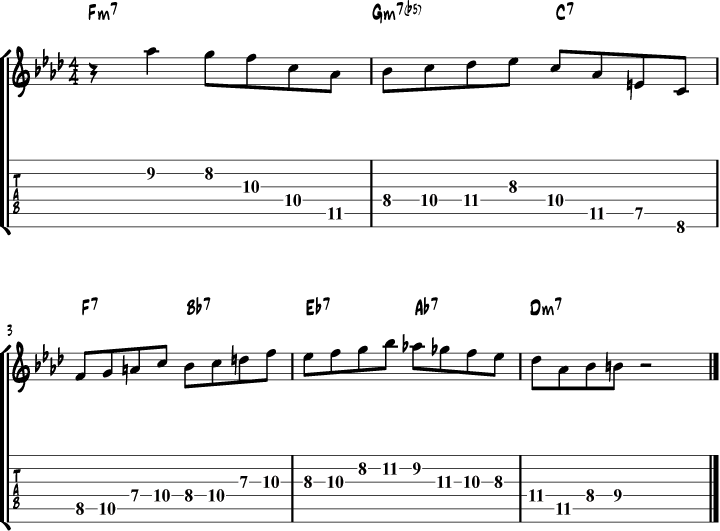 Other popular Joe Pass solos (in order of popularity):


A top 10 best jazz guitar solos list wouldn’t be complete without including at least one Pat Metheny improvisation.

Pat has long been at the top of the jazz guitar world, and it all began with his groundbreaking recording, “Bright Size Life.” His solo on the title track of that album is often considered one of Metheny’s best-recorded improvisations. It also helped to have Jaco and Bob Moses by his side as he navigated these fun to play, and creative, chord changes.

The lick below is taken from a live recording, and features a number of characteristic Metheny sounds.

Metheny may have accomplished an enormous amount over his career. But, it all stems back to his first recording as a bandleader, and Bright Size Life is one of the most memorable solos on that memorable recording.

Check out the list below to see if your favorite Metheny solo made the top 5 as chosen by jazzguitar.be readers. 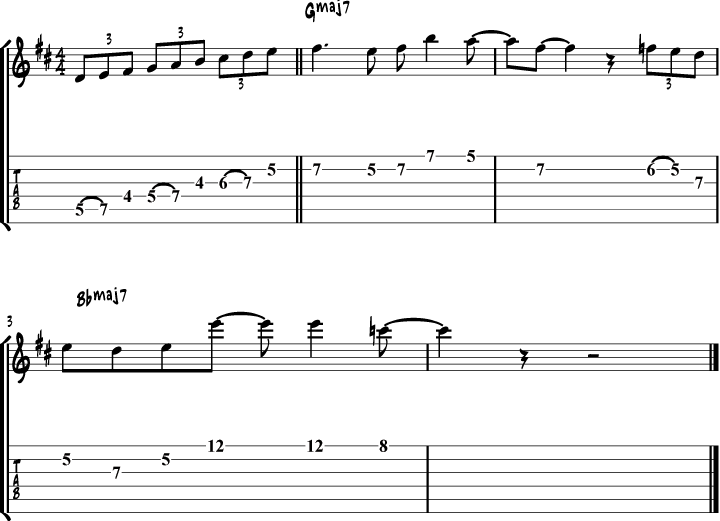 George Benson has had one of the longest and most diverse careers in jazz guitar history.

Getting his start playing hard-driving bebop, pushing Wes’ accomplishments on the instruments to the next level, Benson then moved into the smooth jazz world as he expanded his musical horizons. While some disapproved of his switch in musical focus, as indicated by the fourth most popular jazz guitar solo on our list, fans the world over have embraced Benson in all his forms.

The lick in the “Breezin’” example is played in the typical, energetic Benson style. Full of triplets, 16th notes, and short rests to break up the phrases; this line encapsulates the energy that has made Benson a favorite among fans for over half a century.

Check out the list below to see if your favorite Benson solo made our readers’ list of top 6 George Benson guitar solos. 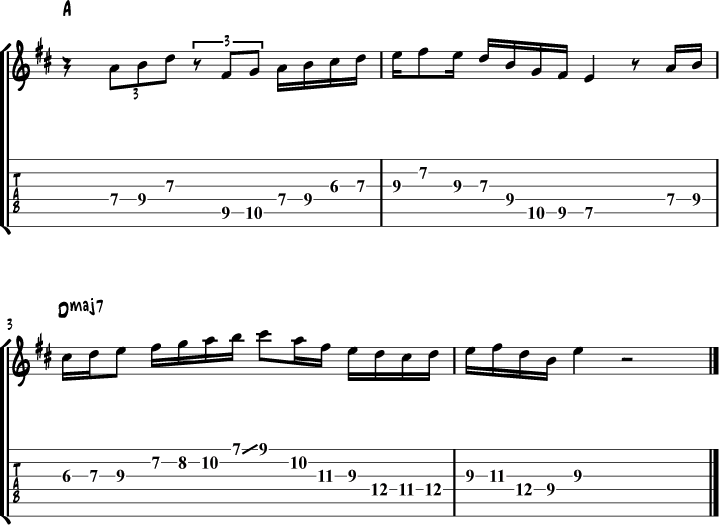 SWING TO BOP (1941) by Charlie Christian

Known as the father of modern jazz guitar, it’s no surprise to find Charlie Christian on a list of top 10 best jazz guitar solos.

The solo voted to our list by readers, “Swing to Bop,” showcases the melodic control, harmonic understanding, vocabulary, and creativity that propelled Christian to the top of the jazz world early in his career.

Though he left this world at a very young age, Christian helped to shape the future of jazz, and influenced almost every great jazz guitarist that came after him in one way or another.

The longer, bebop influenced lick in the example below is characteristic of Christian’s sophisticated, yet bluesy and melodic, approach to soloing.

With a number of chromatic notes, scales and arpeggios, this line reflects the cool, and bebop-based sound that made Christian the first major figure in modern jazz guitar.

Check out the list below to see if your favorite Christian solo made our reader’s top 4 list of solos. 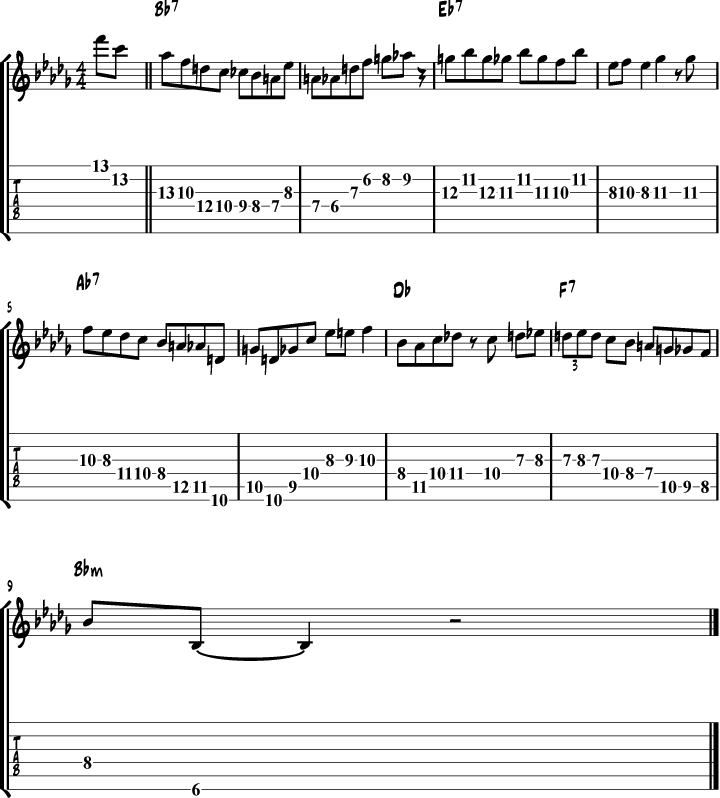 Pat Martino stormed onto the jazz guitar scene at a very young age. Before many other players could drive a car, or even grow facial hair, Martino was already making a name for himself as a top-level jazz guitarist.

Although he has recorded many memorable solos, Just Friends remains as a fan favorite and is considered essential transcribing by jazz guitar educators the world over.

The lick below showcases a number of characteristic Pat Martino soloing concepts.

Check out the list below to see if your favorite solo made our reader’s list of top 5 Pat Martino improvisations. 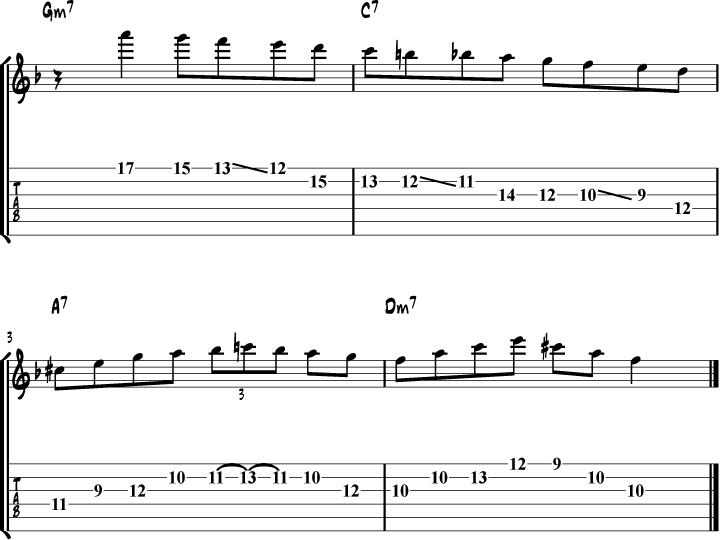 A member of the cool jazz scene, Jim Hall made his name in the jazz world by eschewing speed and chops for a melodic approach to soloing. Though he did possess the chops to play double-time licks, and at fast tempos, Hall preferred to leave space, work melodies, and experiment with textures and colors in his solos.

It’s no surprise to see Jim’s solo on “You’d Be So Nice to Come Home To” on this list of top 10 best jazz guitar solos. The performance is one of Hall’s best on record, featuring his strong rhythmic and melodic approach to improvisation throughout the tune.

The lick below reflects Hall’s melodic approach, as he develops melodies across the phrase, leaving space and letting each note breathe as he plays over the changes.

Check out the list below to see if your favorite Jim Hall solo made our reader’s list of top 7 solos. 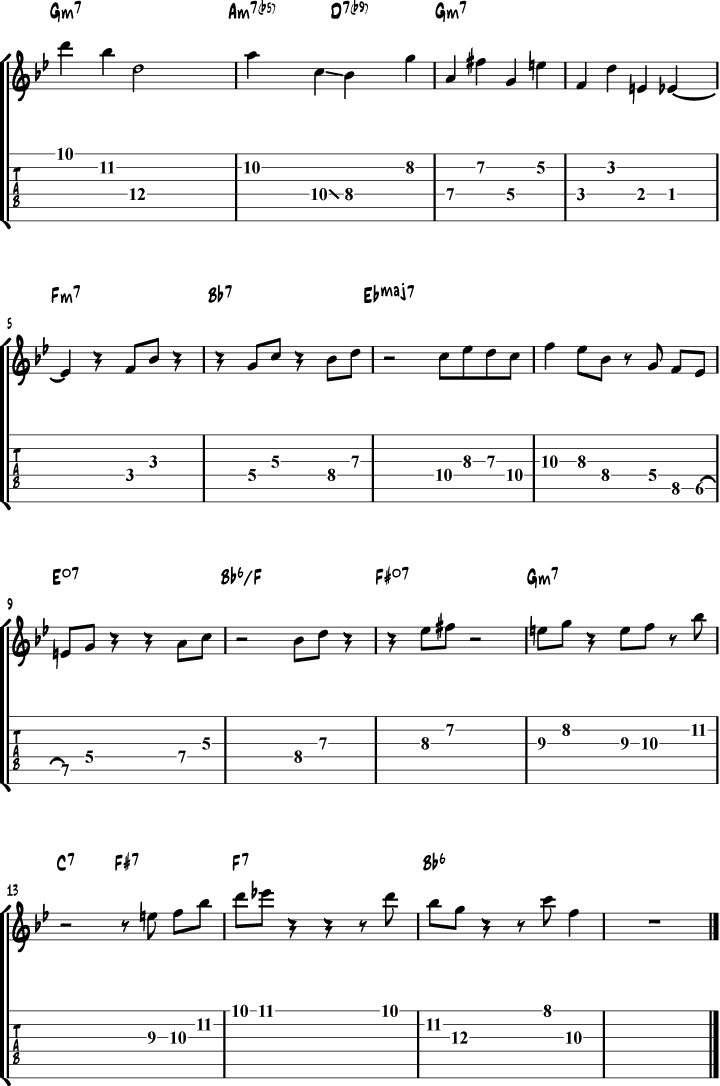 8. Django Reinhardt – I’ll See You in my Dreams

I'll See You In My Dreams By Django Reinhardt

Consistently voted as one of the best jazz guitarists of all times, Django Reinhardt’s name has long been synonymous with gypsy jazz guitar.

Ranked as the 8th best jazz guitar solo of all time by our readers, “I’ll See You In My Dreams” is a classic Django improvisation.

The solo builds in intensity, contains a strong rhythmic feel, and brings out Django’s penchant for developing melodic phrases over the course of his solos.

In the lick below, you’ll see just such a melodic line.

It’s this level of organization and melodic control that have kept Django’s name near the top of the list of greatest jazz guitarists for decades since his passing.

Check out the list below to see if your favorite Django solo made our reader’s list of top 5 improvisations. 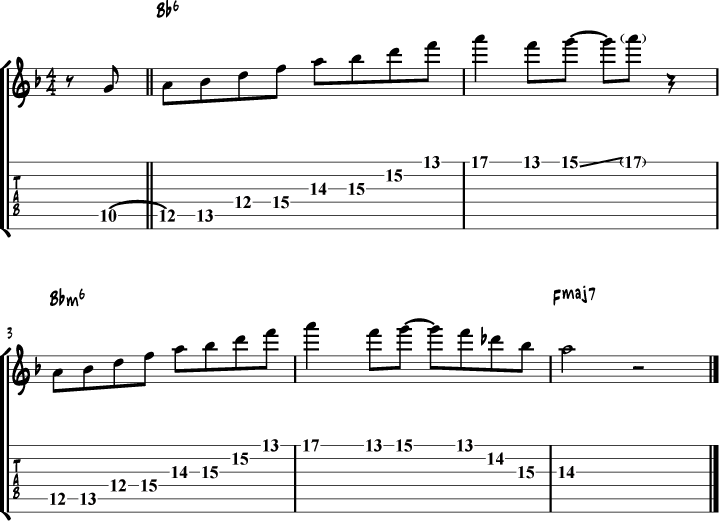 While it’s not surprising to see Kenny Burrell on a list of the top 10 best jazz guitar solos, what might be surprising, is the solo chosen…

With a long and successful career, Burrell has released a number of memorable records over the years, including his most famous album, Midnight Blue. But, the solo voted by readers as his best, and number 9 on the list, doesn’t come from that record, instead its Burrell’s take on the classic jazz tune “My Favorite Things.”

Playing in 4/4 time, as opposed to the traditional jazz waltz feel, Burrell brings his characteristic bluesy feel to this often-played jazz standard.

The example line is built with a favorite rhythmic and melodic motive of Burrell’s, one that you can hear in his other recorded solos. As well, Burrell’s control and love for the blues is showcased in this Em7 phrase. 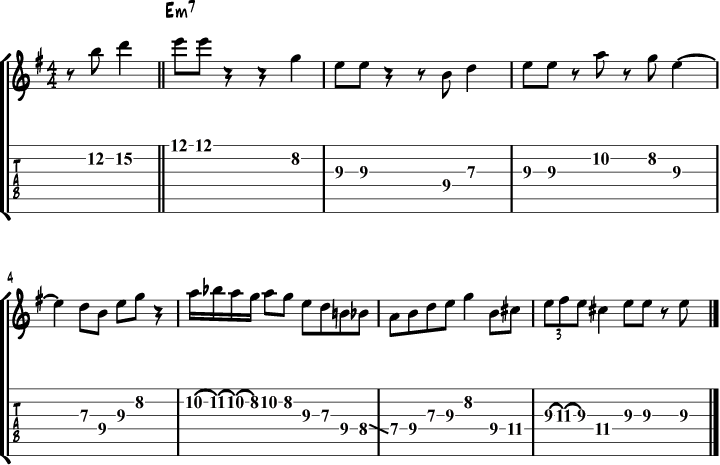 Though many know Grant Green as a jazz funk pioneer, his early career was firmly based in the Blue Note, hard bop sound.

His unique tone, strong sense of rhythm, and control of bebop vocabulary helped propel Green to the top of the jazz world in the 1960s.

Known for his strong blues playing, it’s no surprise to find “Blues for Willarene” on this list of top 10 best jazz guitar solos.

As you’ll see and hear in the lick below, Grant was a master of jazz blues soloing, with an endless supply of licks under his fingers to draw from in his improvisations. Grant didn’t just recite lines, he made them his own, and brought his personality into everything he played. 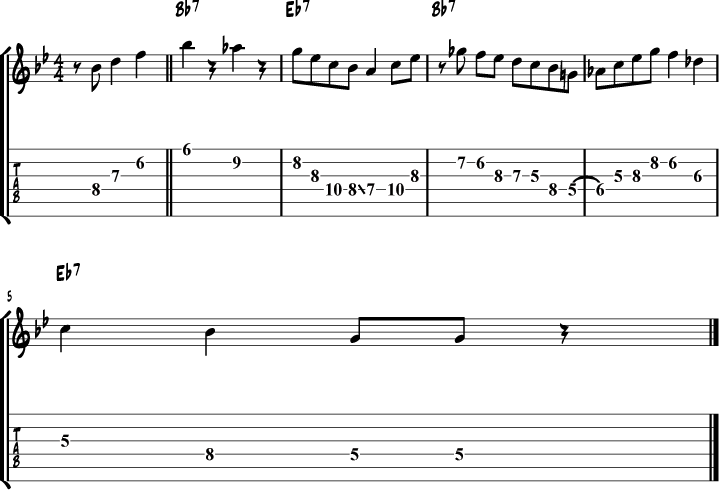 What are your favorite jazz guitar solos? Let us know in the comments below…