Kind of Blue, Miles Davis’ best-selling album, was released in 1959. The entire album was composed as a series of modal sketches, in which each performer was given a set of modes that defined the parameters of their improvisation. While So What is the most famous tune of the album, All Blues is definitely a runner-up in terms of popularity, and a good addition to your standard repertoire. 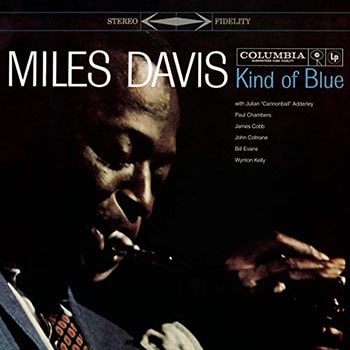 All Blues is a 12-bar blues in 6/8, but not a blues in the strict sense of the word. The tune has a lot of bluesy aspects, but it doesn’t have the usual blues chord progression.

In this lesson, you will learn to play the melody of All Blues, the chords, and how to improvise over its form.

All Blues – The Melody

Here is how I usually play All Blues’ theme.

I play most of the melody with single notes, except for a few passages where chords are added.

Here’s how you can play the basic accompaniment that’s played by the piano on Miles Davis’ recording of All Blues.

The first 4 measures also work as an intro.

The basic guitar mode you can use to improvise over All Blues is G Mixolydian.

Many people play a C7 in the 5th and 6th measure. This is not entirely correct because the bass keeps playing a G, while the piano player plays variations of C7.

The mode to use on that part of All Blues is G Dorian. 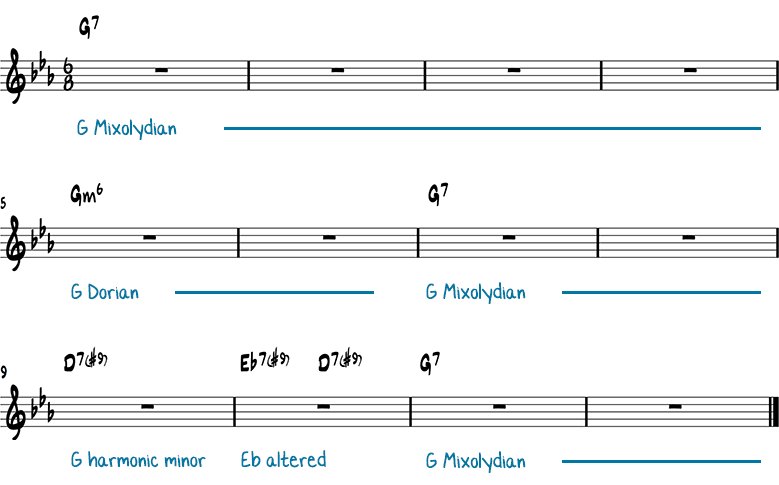 What Can You Play On The G7?

As mentioned above, the first mode of choice over the G7 chord is the G Mixolydian mode:

Don’t limit yourself to this position though, learn to play this scale over the entire neck:

Another option to play over the G7 is the G major pentatonic scale or the G major blues scale.

Here’s the root position of the G major blues scale (again, don’t limit yourself to this position, use the entire neck). The blue notes are shown in blue. Use them to slide, hammer or pull into the 9 or 3.

Another option to play over G7 is the G minor pentatonic scale or the G minor blues scale.

This first example uses the G Mixolydian scale in 2 positions combined with chromatic notes and a Dsus4 arpeggio in the second bar.

Because of the bluesy nature of the song, double stops and such also work well (last bar).

In modal songs, you’ve got to find ways to make your solos interesting because the harmony doesn’t help you much. One of the things you can do is put some large intervals in your soloing lines.

This example uses major and minor sixths in the G Mixolydian scale.

Using arpeggios with a lot of tensions can also help to open the sound in modal tunes.

In the first bar of this example, I play an Fmaj7 arpeggio over G7.

The most obvious scale choice to play over the Gm6 (or C9, depending on how you look at it), is the G Dorian mode (=C Mixolydian mode).

An option that works well is to play G Mixolydian on the G7 of bars 1-4 and play the G minor blues scale on C7 in bars 5-6.

If you start with the G blues on the G7 you get bored of the sound sooner and the effect is more dramatic if you introduce the G blues scale on the C7.

In this example I want to show you 3 things:

1.  In the first 3 bars, I use a phrase that is transposed. Motivic melodies like this work well on modal tunes and grab the listener’s attention.

2. Although there is no real modulation to C7 in the 5th bar because the bass stays G, it sounds like it is going to C7 because the harmony changes to G minor. Because of this, you can use what you usually play on a blues.

In the 4th bar, for example, I use the G altered scale, as I would normally do to go to C7.

These chords are normally used on a minor blues, but here they are used in the context of a major blues.

The tensions used by Miles Davis make it hard to tell which scale he was thinking of. This is purely a theoretical thing and doesn’t matter so much, but it makes it interesting none the less.

Theoretically, I can think of 2 scales where this could come from:

In this example, I play the G harmonic minor scale with added b7 (the second note).

In the next example, I emphasize the #9 (f) and finish with a simple chromatic idea in the last measure.

In this last example, I use 2 minor pentatonic scales.

And Eb minor pentatonic over Eb7#9.

11 thoughts on “All Blues – Melody, Chords, and Improvisation”