Known as the workhorse of jazz guitar, the Gibson ES-175 is an iconic hollow body electric guitar loved by many legendary guitarists in the worlds of jazz, blues, rock, and fusion. The Gibson ES-175 has a recognizable sound that has been imitated by many guitar makers but seldom duplicated.

In its nearly 70-year history, the ES-175 has become synonymous with the greats of jazz guitar.

Though the Gibson ES-175 is associated with jazz greats like Jim Hall, Pat Metheny, and Joe Pass, its versatile tone and ability to take distortion has made it a favorite of fusion and rock guitarists like Steve Howe (Yes) and Buck Dharma who played an ES-175 on Blue Oyster Cult’s classic Don’t Fear the Reaper.

Its tone is warm and round but also clear and articulate, chiming with a quality that is spacious and airy while also being distinct and bell-like.

It can be said that the Gibson ES-175 anticipated a new era in jazz history, constantly stretching the boundaries of music into new territories.

To achieve its characteristic clarity of tone, the ES-175 is generally played with the volume and tone dialed down a bit to allow it to ring through with its usual warmth.

The ES-175 is unique among hollow body archtops for its ability to deal with higher volume levels without excessive feedback.

The guitar is also liked because of its size. Compared to other Gibson archtops such as the L-5, the ES-175 is very comfortable to play.

If you’re looking for a good all-round guitar, the ES-175 might be a good choice for you.

Laminated maple back and sides

Single binding on back

Tune-o-Matic bridge on rosewood base

The Gibson P-90 is a single-coil pickup that has been in production since 1946 and is still being produced today, by Gibson and other companies.

P-90s were initially meant to replace Charlie Christian pickups, which were the standard pickups for Gibson hollow bodies.

P-90 pickups have a raw sound with a broad spectrum but don’t sound as warm as humbuckers and are noisier.

A humbucker has double coils that cancel out (or buck) mains hum (60-cycle hum).

Humbuckers are also known as PAF pickups because until 1962 they had a sticker at the back that said: “Patent Applied For”.

The humbuckers in the ’80s were designed by Gibson engineer Tim Shaw and were the forerunners of the ’57 Classic pickups that are still used today. These ’57 Classic humbuckers are made to the same specifications as the original PAFs. 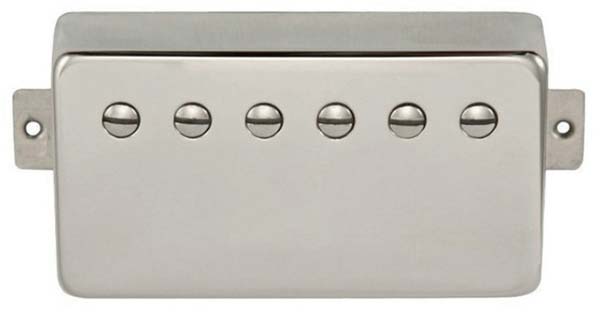 Some early models had Alnico V pickups, but these are very rare.

Between 1978 and 1979 Gibson produced an ES-175 model with a Charlie Christian pickup (see further below).

Some more recent models came with P-94 pickups, which are P-90s in a humbucker casing, but these are rare as well.

The standard Gibson neck used on ES-175s and other Gibson guitars went through a few changes in size and shape over the years.

A lot of people are a fan of the chunkier necks of the early years, compared to the thinner necks that emerged in the 60s.

History of the Gibson ES-175

Because of the rise of electric guitars, acoustic volume was not a priority anymore. This allowed guitar builders to use laminated (thin pieces of wood glued together) maple instead of solid spruce for the tops.

The first Gibson ES-175 models cost $175 and that’s where these guitars get their name from. ES stands for Electric Spanish.

Here’s a list of acronyms used in relation to the ES-175:

Here’s a list of how many ES-175 models were shipped by Gibson the first 20 years of production:

The Gibson ES-175 was introduced in 1949 (June 15), when Gibson was under the leadership of Ted McCarty.

Gibson’s aim was to produce a mid-priced electric guitar with a cutaway. This Florentine (sharp point) cutaway allows guitar players to play all 19 frets (later 20 frets) with ease.

The Gibson ES-175 has a maple all-laminate construction. This kept production costs low and feedback at a minimum.

Until 1953, the Gibson ES-175 came with a single P-90 pickup in neck position. A two-pickup model was available as a custom order. A few models came with Alnico V pickups, but these are very rare.

This Gibson ES-175 model was available in a natural or sunburst finish (nitrocellulose lacquer).

This guitar has the same body and hardware as the single-pickup version but has double P-90 pickups instead of a single P-90. Though there were double pickup models available in 1951 and 1952, they did not receive the ES-175D designation until 1953.

The ES-175D Gibson came at a price of $250 in sunburst and $265 in natural. There were also some instruments released with a black finish.

The next major change came about in February 1957 when the ES-175D was equipped with two PAF humbucker pickups instead of P-90s.

In 1958, another version of the ES-175D came out with a T-shaped tailpiece and zig-zag patterns on the sides.

In 1959, Gibson officially stopped manufacturing ES-175s with a natural finish, although 5 natural models were shipped in 1960. This lasted until 1963.

Some instruments were released with a cherry red finish.

In 1974, Norlin Music Instruments acquired Gibson and changes were made to their entire product line. Not a lot of people are fans of guitars from the Norlin-era, which lasted from 1974 to 1986.

The ES-175T was not very successful though and was discontinued in 1979.

From 1978 to 1979 Gibson produced the ES-175 CC model, which is a standard ES-175 with a single Charlie Christian blade pickup in neck position.

Note that these pickups are not the same pickups Charlie Christian and Barney Kessel used.

In 1983, the back and sides of the Gibson ES-175 changed from maple to laminated mahogany, while the top remained laminated maple.

In the ’90s, the Tim Shaw humbucker plugins of the 80s were replaced with the new ’57 Classic pickup.

It comes with a single-cut maple body (vintage sunburst), a mahogany neck, and a 21-fret rosewood fingerboard with double-parallelogram inlays.  The bridge has abalone inlays.

In 2010 Gibson released a number of 1959 ES-175 reissues, including a single-pickup model. These guitars come from the Gibson Memphis shop.

Gibson replicated the construction of the ES-175 as it was done in the 50s, including solid sides, internal rims, thinner nitro finish, and the wooden bridge.

The current models of the Gibson ES-175 are equipped with two Gibson 57 classic pickups, which are replicas of the PAF pickups of the 1950s.

The ES-175 Special Wurlitzer was a custom-ordered ES-175 that was thinner than the standard ES-175 and trimmed out like a Les Paul.

The guitar was custom made for guitarist Andy Nelson who worked as a clinician and in sales for Gibson in the 1950s.

Nelson pitched this streamlined ES-175 model to Wurlitzer stores and even ran a spot on WBBN radio that Wurlitzer sponsored. Though we know them today for jukeboxes and pianos, in the mid 20th century the Rudolph Wurlitzer company was a musical instrument distributor and dealer.

The ES-295 Archtop is essentially an ES-175 with decorative gold paint and a variety of decorative details. A sunburst version exists as well.

The ES-295 is made famous by Scotty Moore, the guitar player of Elvis Presley.

Unfortunately, the decorative gold paint did not stand up well to wear.

The Gibson ES-165 Herb Ellis signature was actually a re-release of the 1953 ES-175 that Ellis played for years.

Originally, the ES-165 came out with a single Gibson 490R humbucker, and single volume and tone control.

In 2004, the ES-165 was re-released, but this time with the Gibson 490R humbucker being replaced by a BJB floating humbucker. The volume control was moved to the surface of the pickguard.

The guitar features a three-piece maple neck, gold-plated metal, and an ebony fingerboard.

The ES-775 sounds a bit mellower compared to the ES-175 because the neck pickup is closer to the fingerboard.

Attempts to Replicate the ES-175 Magic

Throughout its history, the Gibson ES-175 has been cloned by other guitar manufacturers.

During the vintage guitar era, when Gibson along with Fender were the two foremost brands in the world, many manufacturers created ‘clone’ or ‘lawsuit’ versions of the ES-175, including the Aria Pro II ES-650, the Greco FA-80 and the Ibanez 2355M.

Although most of these clone guitars have stood up to the test of time and are now collectible in their own right as quality instruments, the general consensus is that they can’t beat the real deal.

The Greco FA-80 is a clone of the Joe Pass Gibson ES175 and is an actual lawsuit guitar.

The guitar was made in Japan between 1970 and 1974 and was a convincing clone of the more expensive US models.

Greco hollow bodies are hard to find, especially the FA-80.

The Epiphone ES-175 Premium is a scaled-down version of the classic Gibson and is still in production today.

Since Epiphone was bought by Gibson, many of Gibson’s more expensive and iconic models have been released in Epiphone versions that retain many of the original’s look and feel at a considerably lower price.

The Epiphone ES-175 Premium is a remarkably good guitar for a very fair price.

Heritage Guitars is situated in Kalamazoo (MI) and was founded in 1985 by former Gibson luthiers.

While the Gibson ES-175 is made of laminated wood, the H-575 is made from solid carved maple. It has a one-piece mahogany neck with rosewood fingerboard, a floating rosewood bridge, and a trapeze tailpiece. The guitar is equipped with Seymour Duncan Seth Lover humbuckers.

If you are looking to buy a Gibson ES-175, or are wondering about the value of one that you already have, the truth is that there is a wide range of prices that depend on several factors including:

The best Gibson ES-175 models are, in my opinion, those from the late 50s-early 60s. Models from the time period between 1955 and 1963 are unfortunately also the most expensive ones.

The guitars from that era have thinner tops and sound more lively. A disadvantage of this is that they are more prone to feedback.

Another advantage of ES-175s of this era are the necks, which are considered the best.

In 50s and 60s models, a natural finish is more valuable compared to a sunburst because Gibson stopped producing the natural version in 1959 (until 1963).

When buying an ES-175 from the 60s and early 70s, make sure the guitar doesn’t have a sunken top and that the fingerboard area over the body hasn’t risen up, both issues which are not uncommon.

The tops of these guitars were tinner (and more resonant), making them more susceptible to top sinking.

Two symptoms of a sinking top are the bridge pickup that is set unusually high and the bridge that is unusually high to compensate for the drop of the top. If you suspect a sunken top, have a look under the top with the camera of your phone to check for broken kerfed braces.

The period between 1969 and 1986 is not considered to be a desirable period for the Gibson ES-175, because of the neck volute, heavier construction, and plain maple top, back and sides.

An advantage of these Norlin-era ES-175s is that they are less prone to feedback, making them a more practical instrument.

In 70s models, the finish is not such an important factor as it is for 50s and 60s guitar.

Models produced later than 1983 feature mahogany back and sides, as opposed to the classic laminated maple.

Some players prefer these models for their “mellower” tone.

Gibson ES-175 reissues are generally good guitars and well worth their price, especially the 1959 VOS edition.