Lawsuit guitars are high-quality copies of popular American brand name guitars (like Fender and Gibson) produced by Japanese companies in the 1970s. These Japanese lawsuit guitars are of legendary quality and are highly sought after. There are still gems to be found, on eBay or Reverb for example, and a lot of these auctions are genuine, but some of these lawsuit guitars for sale are not lawsuit guitars at all. If you are interested in buying a lawsuit guitar, make sure you read through this article first and then do more research before you buy or start bidding on a guitar.

Anyone who’s looking for vintage guitars on eBay or Reverb comes across the word “lawsuit”.

The word is abused a lot though because it drives the price of a guitar up. What exactly is a lawsuit guitar and why are they so popular?

The popularity of lawsuit guitars is easy to explain:

So it sounds like a good idea to search for these lawsuit guitars in order to get a great sounding vintage guitar at a good price.

Be mindful of scams though, some sellers claim to be selling a Japanese lawsuit guitar, while they are not. Inform yourself, starting here…

The History and Background of Japanese Lawsuit Guitars

In the late 1970s, there was a general dip in the quality of the production ethic of most mainstream American guitar companies.

Household names, such as Fender and Gibson Guitars, were not cranking out the quality workmanship which they were known for in the past. This lead to the emergence of copy guitars from Asia which used arguably better parts and craftsmanship.

The company that started importing these quality copy guitars was Elger Guitars.

The founder of Elger Guitars, Harry Rosenbloom, was the first American to import Japanese-made guitars.

He imported guitars from the Hoshino Gakki company, who made guitars under the brand name Ibanez. In 1971 Hoshino bought Elger Guitars, which became Hoshino USA.

Their logos and production styles were similar enough to where American guitar companies felt that the consumer was being confused into buying guitars which they believed were from them.

A lawsuit between the parent corporation behind Gibson Guitars and Ibanez Japan/Elger Guitars lead to a precedent that stunted the production of these low-cost, high-quality guitars.

The actual lawsuit had place in 1977 and was between the Norlin Corporation (Gibson’s parent company) and Hoshino USA.

The issue was settled out of court. In 1978 Ibanez abandoned the idea of copying popular American guitar models and started manufacturing guitars from their own designs.

Here’s a detail of the Gibson headstock that Ibanez copied:

Here’s a post-lawsuit Ibanez headstock, without the “moustache”:

Later on, a lot of these copy guitar companies were shut down. Gibson and Fender went on to take advantage of the production capacities by purchasing Japanese factories to make their own lower cost copies.

There were other lawsuits as well. Greco and Tokai, for example, were sued because their logos looked like those of Gibson or Fender.

This might trick buyers in thinking they were buying the real deal.

Although there were many guitar companies making these copy guitars, Ibanez was the only company that actually got sued by Gibson.

Here’s an overview of the best known “lawsuit guitar companies”:

Tokai is known for their Gibson Les Paul replicas called “Les Paul REBORN” and the “Love Rock”, which are perfect copies of 1958 vintage Les Pauls.

They also made Martin Acoustic replicas. 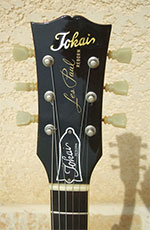 Greco made Fender, Gibson, Rickenbacker, Gretsch, and other replicas. 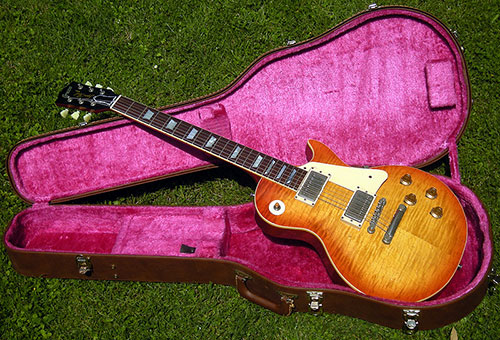 Fernandes is known for its Fender replicas. They are still making guitars today.

Burny is the same company as Fernandes, but instead of Fenders, Burny made Gibson replicas.

Burny guitars are considered to be the best Gibson copies. Burny lawsuit guitars are extremely difficult to find and very expensive.

They are hard to distinguish from Korean Burny models as well. Burny is still active today.

Their Les Paul model is called “Super Grade”, and the words were modeled to look like “Les Paul” (it actually looks like “Luper Grade”). 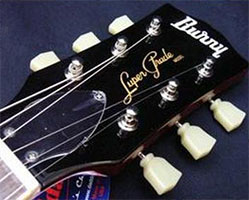 In the past, these original copy guitars from Asia were much more difficult to find.

You would have to keep a close eye on the different collectors in order to find Japanese lawsuit guitars for sale.

This included days spent scouring pawn shops or traveling to different cities. The online world has made securing sophisticated collector’s items like these a lot easier and it can be fun an addictive looking for vintage guitars on eBay.

When shopping for lawsuit guitars on eBay or other marketplaces, it is important that you carefully examine all of the information presented in the auction.

Here are some tips and things to look out for when buying lawsuit guitars:

●  Take a close look at the logos and headstock configuration. Lawsuit guitars have a headstock that is known as an “open book” headstock, copied from Gibson. After the lawsuit, copy guitar manufacturers had to change their headstock design. Does the headstock resemble that of a Gibson Les Paul? 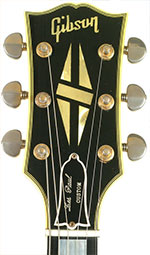 ●  A true lawsuit guitar should have the design and logo style of a more expensive brand from the same era. For example, a Takamine lawsuit guitar might have a logo which is easily confusable for a Martin acoustic. Does the logo look the same like the Gibson or Fender logo?

Here’s the Greco logo as an example (looks a lot like the Gibson logo): 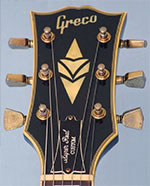 ●  Most Lotus guitars are not lawsuit guitars.

●  Most Lyle guitars are lawsuit guitars.

●  Most Ibanez lawsuit guitars don’t have a serial number (some of the most recent do though).

●  The more actual photographs and specs the eBay seller is willing to demonstrate, the better.

●  It might be a good idea to buy a vintage guitar price guide, there’s a good one published by Vintage Guitar Magazine. Knowing the market value of vintage guitars can help you a lot.

It is important to investigate the specific guitar in question to make sure that it is truly authentic.

Lawsuit guitars for sale on eBay or Reverb will be easily verifiable through research on various guitar forums.

You don’t want to buy a guitar without doing your homework; an authentic Japanese lawsuit guitar will have a lot of verifiable feedback on the web.