In this second installment of “Iconic Guitar Parts”, we’ll have a look at one of the most recognizable movie themes ever, the James Bond Theme, featuring the famous guitar riff played by Vic Flick. Written by Monty Norman and arranged by John Barry, the James Bond theme song was recorded in 1962 for the first Bond movie Dr. No, starring Sean Connery as James Bond.

In this lesson, you will learn how to play the James Bond theme on guitar.

The James Bond theme song has been used as the background music for the gun barrel sequence in almost every Bond movie.

The recording band for the orchestral version consisted of 5 saxophones, 9 brass instruments, vibes, a rhythm section, and a guitar, which was unusual because not many “big bands” featured guitar at that time.

As John Barry describes it:

“A peculiar mixture of that low rock guitar figure, the brass sound, and a bridge that was almost like a Dizzy Gillespie bebop phrase. It was kind of a hybrid of all these things I was involved with at the time. I didn’t give it too much thought, and it just came out like it did.”

Although the theme was credited to Monty Norman, John Barry (the arranger) claimed on multiple occasions that he who wrote the theme. This was eventually settled in court, which ruled twice that the theme was indeed written by Monty Norman. 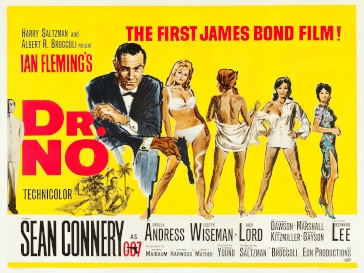 The guitar part was played by a British session guitarist called Vic Flick, who was paid a one-time fee of £6 for his work. Vic Flick played a Clifford Essex Paragon Deluxe acoustic guitar with a DeArmond Pickup going through a Vox AC15 amplifier on that recording.

Here is Vic Flick playing the Bond theme live on the Academy event “The Music of Bond: The First 50 Years” in 2012.

The James Bond chord progression is a modal progression with a voice leading going from the 5th (of Em), to b6, to 6, and back to b6.

The progression switches between an Aeolian sound (b6) and a Dorian sound (6), which are the 6th and 2nd modes of the major scale.

It’s a bit weird to start a lesson with the end of a song, but here you go…

It is an E minor major 9 chord and has a kind of unresolved, dissonant quality to it. It is the chord that sits on the first degree of the E melodic minor scale.

Minor/major seventh chords contain a b3 (minor) and a 7 (major).

The high open E-string can be included in the chord but in the theme, the chord ends on the 9. 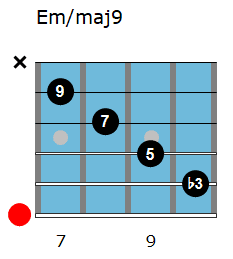 You probably know this chord in another voicing, as the second chord of Stairway to Heaven: 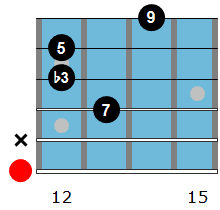 Here are three more voicings you can use for this Em/maj9:

The actual ending goes like this (starts at 1:46 in the Vic Flick video).

The main phrase of the theme is repeated four times, each time starting on the next note of an E minor triad (E G B).

Here is how Vic Flick plays the progression in the Academy video:

You can also play the G on top instead of the low E, like this:

Here is another way you can play the James Bond chord progression with open chords that make it possible to strum:

Side note: this chord progression sounds very similar to Henry Mancini’s composition Softly, written in 1960, and the theme music of a television series called Mr. Lucky.

The chord progression in the James Bond theme goes from Em, to Em(b6), to Em6, to Em.

The chord progression in Softly goes from Gm, to Gm(b6), to Gm6, and one step further, to Gm7.

Here are the tabs for the guitar riff of Henry Mancini’s Softly:

Cry Me a River

Barney Kessel uses the same chord progression in his famous recording of Cry Me a River (starts at 0:14 in the audio below).

He plays a slightly modified version of the Bond progression: instead of going back to the Em(b6), Barney continues the chromatic movement in the upward
direction by going to Em7.

Check out my eBook Jazz Standards 101 – Cry Me a River to learn more about this great standard. 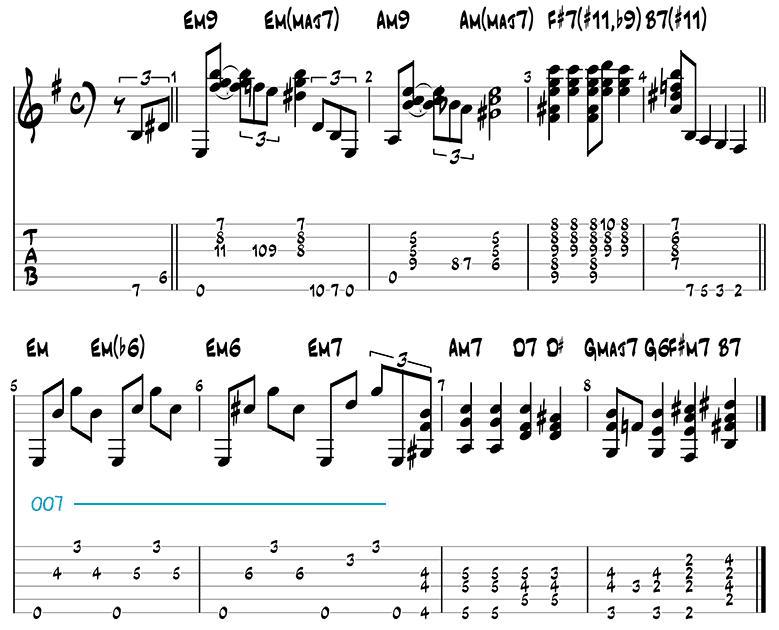 The dum di-di dum dum guitar riff at the beginning of the James Bond Theme was inspired by the vocal line of an Indian song called Bad Sign, Good Sign.

The riff has a bit of a ’60s surf rock vibe to it and is played almost entirely on the low E-string.

Here are the guitar tabs: 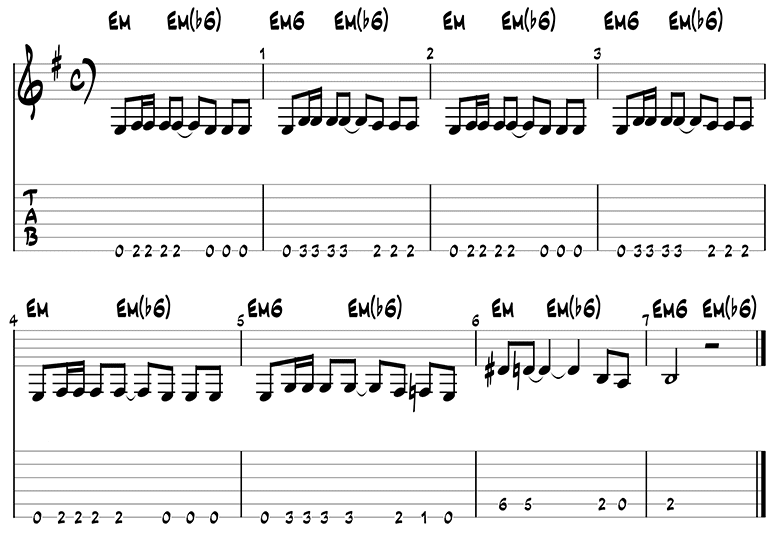 The second part of the James Bond theme features swing-like phrases that use neighbor tones and the 6th found in the Dorian mode. 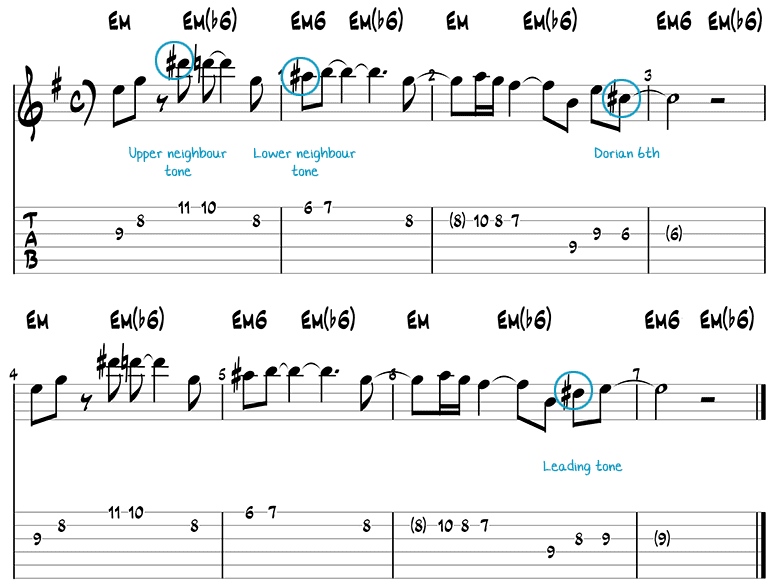 The bridge is relatively simple. The chord at the end is a C#m7b5 with a B in the bass in the orchestration, but Vic Flick plays a Bsus4. 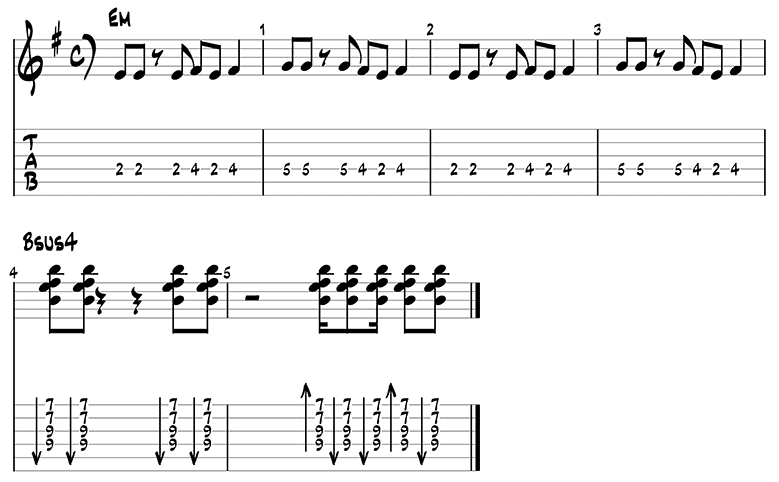 The bridge also lends itself well to be played in octaves, like this: 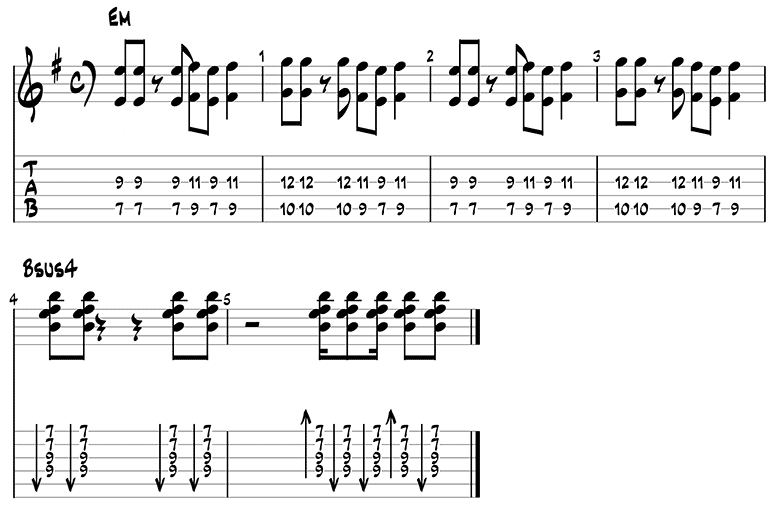 15 thoughts on “The James Bond Theme”