Working on guitar technique can often seem as separate from your soloing workout. You learn technique, put that away, then work on soloing concepts, keeping both separate in the woodshed. But, it doesn’t have to be that way. When you choose the right exercises, you can build your chops and increase your soloing vocabulary at the same time.

One of these exercises is string skipping.

String skipping builds coordination, dexterity, and fluidness in both your fretting and picking hands.

It also helps you break out of running up and down scales in your solos, something that handcuffs many jazz guitarists when soloing.

The first string-skipping exercise runs that concept through a major scale shape.

Go slow with this first exercise, especially if this is your first run at string skipping. Start without tempo, then when you get the hang of the exercise, put on a metronome and work slowly in time on this pattern.

From there, increase the tempo to challenge yourself further, and take it to other keys when ready. If you know other major scale fingerings, you can take this pattern to any major scale shape you know.

Run this exercise slowly with a metronome in the given key to get started.

When that’s comfortable, slowly raise the metronome to increase the speed and difficulty of the exercise.

Lastly, take it to other keys as you move this shape around the fretboard, build your chops, and increase your soloing vocabulary at the same time.

Now that you worked two different scales with the string-skipping technique, you can take that concept further.

To get you started, here are two scale shapes to learn and apply the string skipping technique to., the Mixolydian mode and the altered scale.

Memorize these scales and then put on a metronome and run string skipping through these shapes.

Speed up the metronome over time, and when ready, take these shapes to other keys.

Lastly, after you work these two fingerings, take the string-skipping concept to any and all scales you know or are working on.

Now that you’ve learned how to use string skipping to build technique when working scales, you take that technique to a blues solo. This 12-bar solo uses mostly string skips, with a few non-skips thrown in here and there for variety.

Learn this solo to bring string skipping to a musical situation. When ready, put on the backing track and jam along to the G blues progression below, creating your own string-skipping lines along the way. 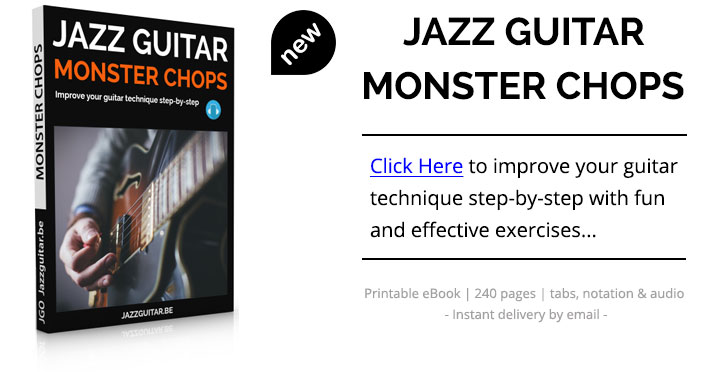